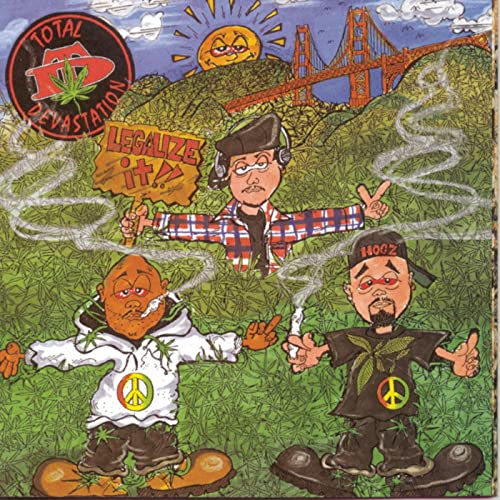 There’s some historical revision going on with the self-titled debut album from Total Devastation. I remember their lead single being called “Many Clouds of Smoke” and the music video reflects that, but when you pull it up on any streaming service now its been renamed “Mighty Clouds of Smoke.” It’s probably a trivial difference given their never mention the song’s name on the hook — it’s just filled with samples of rappers referencing getting high. (My favorite is Smooth B from Nice & Smooth saying “I want to get blunted my brother,” taken from Gang Starr’s “DWYCK.”) On the other hand it’s unnecessarily confusing since their second album has the exact same song under its original name. Was the name change a crass attempt to cash in on their sole hit by making people buy their newer album instead? Probably.

There are no shortage of rappers who have made getting high and/or marijuana legalization advocacy a focal point of their music. Cypress Hill is the most successful, but the Kottonmouth Kings and Awkwafina spring quickly to mind as well. The reason that Cypress Hill towers over other blunt smokers though is the quality of DJ Muggs’ production, the chemistry between B-Real and Sen Dog, and their ability to tell cinematic stories with their rhymes that may or may NOT involve weed. You don’t have to think of them as rap’s Cheech & Chong on every single song, but on the self-titled “Total Devastation” you don’t have any other choice.

The rest of the time they’re looking for more ways to say “How High” they are than Method Man and Redman. They’re on “Cloud Nine,” they’re straight “Zooted,” and they’re attending a “Hemp Rally.” I can count exactly one song where they manage to deviate from their favorite topic by a wide margin and that’s “You’ll Get Blasted,” a song where they brandish guns to avoid being taken out by their enemies. If you didn’t listen to it first you wouldn’t be blamed for thinking “Blasted” was just another way to say they’re stoned, and even here they can’t resist referencing Cypress Hill’s “Hand on the Pump.” I do like the beat and the samples that DJ Tuf Cut threw in though. It’s one of their better songs.

Let me be absolutely clear that I’m pro-legalization, for both medical and recreational purposes. I’m no teetotaler, I’ve hit the bong myself, but due to childhood asthma I refrain from smoking in 99% of situations. If I lived in Denver or L.A. I’d probably be buying some edibles right now, but where I reside that’s not currently an option, so abstinence is more by force than by choice. (Just take it for granted that living in a deeply red state makes it a logistical nightmare and prohibitively expensive to boot.) I’m not knocking Total Devastation for their topic matter, but rather for an entire album so singularly obsessed with that topic that it ultimately becomes tiresome. Without B-Real’s charming nasal vocals, Sen Dog’s booming bass, and that trademark Soul Assassins sound, you can’t get away with that much smoke music — and even Cypress Hill changes it up more than the TD crew do.