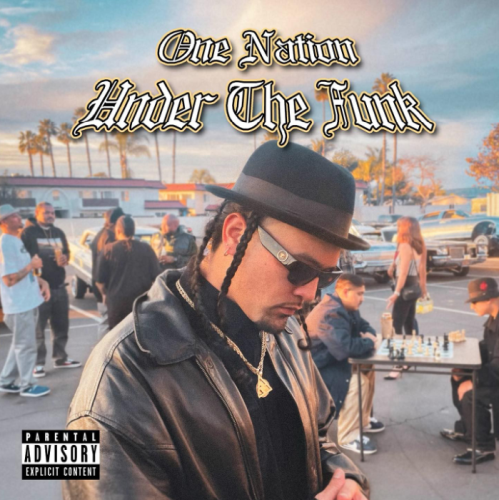 One Nation Under the Funk

Dezzy Hollow :: One Nation Under the Funk

Whether it’s underground gems like Self Scientific’s “Gods & Gangsters” or Chino XL’s “The Ricanstruction“, more familiar fare like Dilated Peoples’ “20/20” or The Game’s “Doctor’s Advocate“, or just a classic production from DJ Mustard or Dr. Dre, nobody does it like the West Coast. There’s a bounce, a crispness, a beauty to the music that emanates from the sunnier side of the United States. Even when the rhymes are dirty, the beats are cleaner (and shinier) than the trademark Cadillac rolling down Central Avenue in the videos. Since the raw anti-establishment riot music of the 1980s, and thug poetry of the 1990s, the West has experienced something of a renaissance in recent times. Nipsey Hussle had the streets locked while Kendrick Lamar became a superstar that backed up his popularity with critical acclaim. Locksmith is one of the hardest lyricists out there. Veterans like DJ Quik, MC Eiht, and Cypress Hill are still making great music. Ras Kass and Chino XL are still tearing mics apart. It might feel different from the heady heights of N.W.A., Tupac, and Snoop Dogg, but for a full menu of what the West Coast has to offer, have we ever had it this good?

Problem, Anderson Paak, Westside Boogie, hell even Hit-Boy is from Cali. I could go on. Another name you can throw into the mix is Dezzy Hollow. After emerging in the 2010s, Dezzy struck gold with 2017’s “EBT Boi” which, ironically, sounds more trap-influenced than what Dezzy is going for here. The video has 7 million views, yet it’s not as good as his newer material; which is either an indictment of the taste of the masses or an inherent bias of this writer who has a soft spot for artists that celebrate their heritage. If you’re after West Coast G-funk, Dezzy Hollow has you covered with “One Nation Under the Funk”.

There’s a warmth to everything Dezzy does on this album. Revisiting an older G-funk album, you’re often left rolling your eyes at the sexism or homophobia that was of its time, or even the excessive cursing in the verses. That’s simply not present here, which only enhances the good vibes and emphasis on fun.

The single “Bounce” with W.C. is a welcome collaboration between old and young, aimed at anyone wishing to cruise in their car with the window (or roof) down. Chabbi Beats instrumental may lack the swagger of W.C.’s best material (check out the underrated “Guilty By Affiliation” and Daz-assisted “West Coast Gangsta Shit“), but it has enough of that arrogant strut to its style that it just works. You’ve also got songs like “Ballerina” and “La Da Da” that could see more mainstream success – they feel accessible and suitable to any summer playlist, or what many may still refer to as barbeque music.

“Back and Forth” throws a nod to Aaliyah and the slow jams of yesteryear, while “Shorty” channels Dr. Dre and Roger Troutman for inspiration. This may sound backward and obsessed with the glory days, but it gets away with it by simply tackling the style without being heavy-handed. “Backstroke” is brief, yet silky smooth, demonstrating Dezzy has the chops for hooks too, as does the aforementioned “La Da Da”.

A few tracks miss the mark: “No Percent” has too many gaps in the vocals, which gives it a disjointed feel, and the beat doesn’t match the level set by the first few songs. The aforementioned “Ballerina” also sounds like it’s missing a third verse, as the beat just plays for the final minute. “Hot Stepper” also felt too quick, instead of too Quik.

Dezzy Hollow is an artist that’s not quite the full package but shows he can hang with his peers. A few tweaks to songs here and there, particularly the gaps between Dezzy’s rhyming that make some songs sound disparate and lonesome, could see the breakthrough of another West Coast artist destined for bigger things. He may lack the irresistible charisma of a Snoop Dogg or an Ice Cube, but his focus on lighter, uplifting moods on “One Nation Under the Funk” is more than welcome, particularly in 2022.