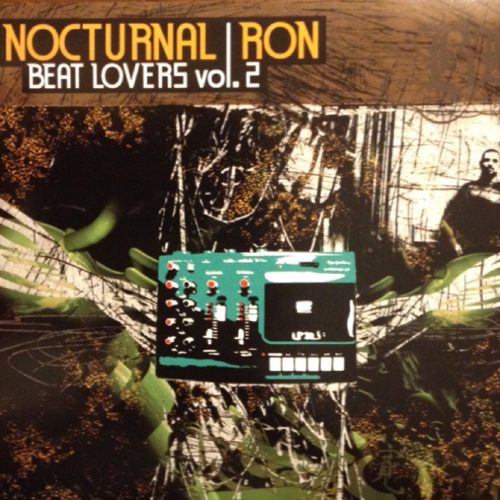 Instrumental albums are a hell of a lot easier to summarize than listen to. The search for a tolerable one seems like endless exercise in futility, and the chances of digging up classic material are about as good as Deadringer or Endtroducing. The fact of the matter is that most producers don’t feel the need to put their very best foot forward on a solo longplayer, and you can’t blame them; beats sell better with emcees on top. Still, its never a bad idea to advertise, and what better way for producers to spread the word then a collection of choice cuts?

Cashing in on this concept is Los Angeles’ own Nocturnal Ron. However risible a moniker it may be, Ron makes it pretty clear that he does like to stay up late into the night. Doing what? Yes, yes, y’all: homeboy digs the crates. Heads will take immediate notice to the samples abundant on Beat Lovers Vol. 2, which span a wide body of genres, notably ’70’s soul, but certainly not limited to. Ron picks apart movie sound-effects, symphony selections, funk guitar, the occasional KRS vocal, and of course, Tom Cruise.

Sampling inviolably reigns supreme on Beat Lovers, and by virtue of it’s structure (34 short tracks), it quickly draws comparisons to Dilla’s Donuts. Even beyond the LP’s arrangement, Ron’s style is explicitly and sensationally James Yancey, from the subtle drum patterns to the obscure and sparsely arranged samples. This isn’t a bad thing, and it doesn’t hurt him in the slightest, but Ron fails to really institute a style all his own, and Beat Lovers ends up sounding more like something straight off the Stones Throw express line than anything else.

Ultimately, Ron does a fine job putting together a medley of instrumentals that flow together rather seamlessly, hitting a broad range of tempos and emotions but maintaining a darker, somber undercurrent. Most representative of this motif are tracks like “4:38 AM,” a beautiful wurlitzer piece as aptly titled as it is simple. Ron has little trouble moving from gloomy to playful, as evidence of the sunny groove of “West Los Angeles,” and the calm flow of “Like I Don’t Song This.” Elsewhere, “The Louder the Better” induces more relaxing than head-nodding, while “Trying to Sleep” sports a haunting, albeit funky xylophone loop.

Ron’s missteps have more to do with his executive decisions than his beats. Throughout Beat Lovers, what are labeled as interludes are actually just shorter instrumentals, and frustratingly enough, some of these are reduced versions of what would have been some of the best beats on the album. “Beat” is an intriguing little number, although its length is part of its charm, “Interloop” has a bluesy, sped-up riff and soul sample, and “Maturity” is a 27-second epic that could have afforded to be (at least) three times as long.

Nocturnal Ron puts it down emphatically on his second instrumental installment, from “How It Begins” all the way to “In Case You Forgot.” In between, Kool Keith drops by for a freestyle, and Ali Abnormal from Lyricist’s Lounge even kicks a decent verse over a jazzy beat on “Habibi Snuck A Gun In the Disco.” Although it could have just as easily went for Donuts Vol. 2, Ron makes it hard to hate on very much that he has to offer, and he may be the first step towards filling a void that hip-hop has endured since the loss of J Dilla. Beat Lovers Vol. 2 is a worthwhile sneak-peak into Ron’s music, even if you keep expecting Quasimoto to drop a verse.