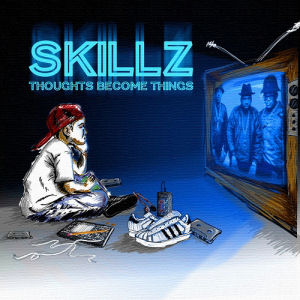 The annual “Rap Up” tracks from Skillz are still an obligatory part of any hip hop fans’ playlist come New Year. Although Skillz (initially Mad Skillz) has released six studio albums, he is more recognised nowadays for his commentary pieces on the year that was, rather than the dope rhyme-spitter I first experienced on the classic “B-Boy Document ’99” alongside Mos Def and Mr. Eon. Possessing a high-pitched delivery reminiscent of Big L, Skillz dropped the underrated “From Where???” in 1996, then followed it up with the good, but not great “I Ain’t Mad No More”. With each release, Skillz got stronger, as shown by his consistent 8/8.5/8 scores handed out by my RR colleagues for his three albums previous to 2012’s “Thoughts Become Things”.

One thing that Skillz is, is consistent. Yet being consistent still hasn’t helped Skillz drop a classic record, or find himself featured in Top MC Lists across the internet. It’s a strange position he finds himself in, and “Thoughts Become Things” sums up the no-nonsense approach taken by the former mad man. It is a shame that this is billed as Skillz’ final album though, as tracks like “So High” and “Ignorant Levels” showcase Skillz’ ability to combine modern sounds with a traditional rapping style. “Ignorant Levels” is a rapid-fire production from Rik Marvel with Skillz showing that his experienced flow hasn’t been affected by years of spitting. “Love n Hip Hop” is a refreshing take on the Hip Hop/Woman metaphor that is so often revisited. Instead of vaguely rapping about his love for hip hop as if he was talking about a lady, Skillz has iconic samples from classic songs scratched in as if they are past relationships, over a hypnotic take on Madvillain’s “Accordion”:

“It all started with Bonita
That Applebum was a teaser
And then she got cold like a freezer
Caught me sharing a slice of pizza with Mona Lisa *Mona Lisa*
Yvette, yo she a cheater *yo Yvette*
I treat her like a prostitute and don’t believe her
Now Lizette, the teacher’s pet
Got it on with the hoe Sonic and I mean Stet’
*Oh, Veronica Veronica*
I caught her bike-riding down Santa Monica
I dated all them chicks
From the brown skin woman to the sophisticated “BIIITCH”
And that’s too much to juggle
’cause the girls of the world *ain’t nothin’ but trouble*”

It’s a brilliantly emotive piece of hip hop, and the little details are what separate Skillz from other artists. Unfortunately moments like this are few and far between. Nearly every track includes a softly sung hook that lends a poppy sound to the album, the best example of this being “Tryin’ To Get By”, a shameless attempt at a club track, accompanied with voice effects, tinny drums and an overblown chorus from Carmael. It feels uncomfortable, and a big step down from the artistic integrity he built on albums like “Million Dollar Backpack”. “I’m Outchea” is similarly soulless whilst “Maybe I Don’t Know Her At All” sounds like an overlong skit, with Skillz rapping with a filter on his vocals to give the effect of him leaving a message on a lady’s voicemail. It’s too experimental for its own good, and would have been a more enjoyable listen if Skillz just rapped like he does on the rest of the record. The “2012 Rap Up” isn’t his best but comes accompanied with Skillz’ trademark humour and covers everything from Jay-Z and Beyonce’s daughter to the hit “Gangnam Style” from Psy.

The reason Skillz had an upward surge in popularity from 2006-2009 was mostly down to his comedic annual summaries on hip hop culture. It’s a shame people forget about the albums Skillz put out in that period, as they are probably his best work. “Thoughts About Things” shows glimpses of that emcee, the guy famous for writing other rapper’s rhymes, but for each inventive, original song there are two or three that bow down to the ideals of what’s hot right now. I hope this isn’t Skillz final album, as it would be a shame to bow out on such an average record.