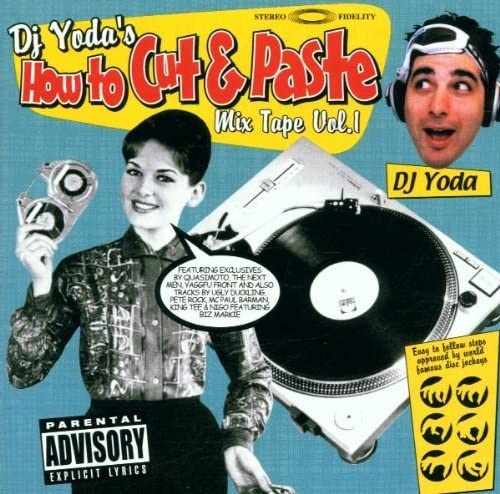 The streaming era and rise of self-curation have hurt the profession of DJs immeasurably, and the biggest impact undoubtedly has been turntablist albums. When was the last time you saw a turntablist release an album, let alone what format it arrived on? The very nature of the turntablist is to tie records together, blend different sources of music, and showcase the abilities of a DJ at cutting, mixing, and scratching a record to within an inch of its life. They can be an acquired taste but are a crucial part of hip-hop culture and its history. Yet, when you see lists of best albums or even “great hip-hop albums”, you never see DJ Faust’s gem “Man Or Myth?” or DJ T-Rock’s superb “Who’s Your Daddy?”. The turntablist is arguably the hardest of all the professions, yet often gets ignored. There is inevitably a degree of inaccessibility to these records because most people don’t want to sit and listen to an hour of scratching – this is where DJ Yoda excels beyond his peers.

Yoda is a British turntablist who leans just as hard as he does on his British-ness as he does his turntable skills. The skills on display on his debut mix-CD “How to Cut and Paste Vol. 1” are exceptional, but there is entertainment that’s eccentric, goofy, playful, and most importantly, fun. Many turntablist albums disappear up their own backside by focusing on the skill but can be a slog to get through. “How to Cut and Paste Vol. 1” doesn’t suffer from this, and has aged wonderfully given it dropped in 2001.

Thirty-five tracks may sound daunting, but it flies by. Starting off with a light-hearted tribute to Gang Starr’s early work (“It’s A Stick Up”) features Willus Drummond, a properly obscure emcee who worked with J-Zone in the early 2000s but little is known otherwise. A similarly deep cut is found on The Nextmen’s “Global Warming” featuring UK emcee Kerosene – the punchlines aren’t quite Chino XL level but he kills it all the same over a crazy beat. I wonder what ever happened to him?

Ugly Duckling’s “Eye on the Goldchain” is the quintessential example of what Yoda’s gone for, so if you listen to that track first and like it, you’ll like what else is here.

The album (or mixtape as it’s billed) is a combination of actual songs and crafted blends. The former are all excellent examples of traditional New York boom-bap, often with an older artist pairing with a younger one. Yaggfu Front’s “Roll With The Yaggfu” (also available on their 2002 release “The Secret Tapes“) is a forgotten classic, Pete Rock and Roc Marciano’s “Give It To Y’all” is one of the best 12″ singles from 2001 (featuring a young Trife Diesel), and there’s the brilliant “Back Up” by King Tee and Phil Da Agony bringing some West Coast flavor that will get rewound a ridiculous amount of times.

Veteran jazz artist Bob James features on “Mexican Policemen At The Alien Mardi Gras”, “Perverted Disturbances” and “Irritating Dove” amongst others. These iconic samples are stomped all over with toilet humor and infantile sound effects, and it’s aged remarkably well given this album was released at the height of Eminem and Jackass. MC Paul Barman appears on “Salvation Barmy” and he’s always been a divisive voice, yet suits this album more than anything else he’s appeared on. There are farts and hiccups blended with The Treacherous Three on “Stupid Poo”. You’ve got a completely random documentary snippet on the growth of Indian restaurants in the UK blended into a wild Madlib beat on Quasimoto’s “Astronaut” followed by Yoda going ham on the Dr. Who theme tune. It’s CRAZY, in every sense of the term.

Biz Markie drops by for “Something For The People” and it’s great to hear him on a record like this, given his style influenced this whole project. Similarly revered emcee Edan provides his brand of old-school aesthetic on “Mic Manipulator”, another stand-out moment. I say “stand out”, but every song that’s included here feels perfect, not necessarily in its execution but in its inclusion. That’s the art of a great DJ.

The mock advertisements are often laugh-out-loud funny. “Delta Ebonics” is a spoof airplane commercial while “Sesame Sex” is a wild combination of Sesame Street music and pornographic cries of ecstasy. Yes, really. The art of scratching is showcased in brief twenty-second snippets of guest DJs, including Plus One, Benny G, A-Trak, and Spinbad. These are nice interludes to break up the lunacy of the blends and the straightforward beats and rhymes. Yoda himself does a short reggae set before taking it into the final stretch.

The combination of original Top Gear presenter Tiff Needell with the funk of Parliament’s “My Automobile” closes out the album, with a bunch of farewells from various sources. I’ve always sworn that one is from a non-playable character in SEGA Dreamcast classic Shenmue, which is the kind of deep-cut you’d expect from Yoda.

This mixtape pays homage to that early 90s period when A Tribe Called Quest and Gang Starr dominated the conversation when it came to jazz-driven hip hop that wasn’t afraid to have a bit of fun. It’s the antithesis of what many remember 2001 being (DMX, Jay-Z) where hip-hop still had the fun of Biz Markie, Redman or Das EFX. You can tell Yoda’s influences and his sense of humor is on full display here. “How to Cut & Paste Vol. 1” put Yoda on the map and he is a successful DJ that has toured the world for the past two decades. He’s won DMC awards, he’s judged DMC awards, and he’s the go-to DJ whether it’s the BBC needing someone to mash up their entire station, or Dr. Dre needing a guest mix on his Apple show. Yoda has gone on to do bigger and more impressive things, but his debut was that rare moment a turntablist created a record of unmitigated joy.