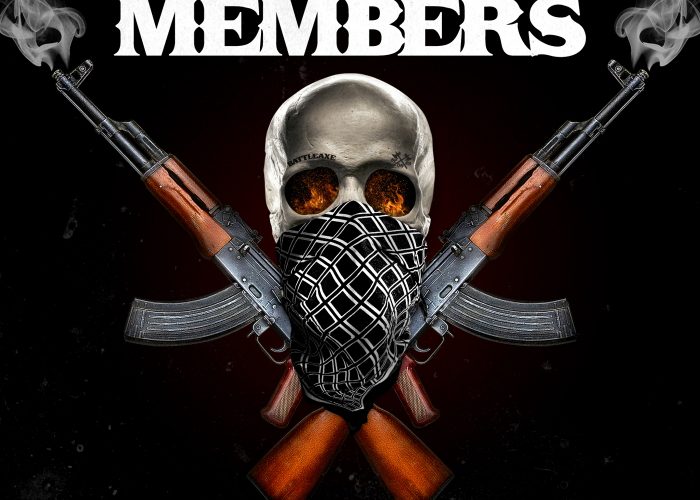 Swollen Members :: Armed to the Teeth

With all due respect to Terius Gray, I could come up with a handful of juvenile things to say when looking at the words “swollen” and “members” paired together. Luckily, my sense of humor has evolved over the years, at least to the point where I can resist making crude and crass remarks about my unit (I think). I suppose it is apropos as such because the group Swollen Members is no joke. They’ve been on the scene for over a decade, their first studio album, “Balance” was released in 1999. From that point on, SM established themselves as one of Canada’s premier hip-hop acts. With all of that exposure, you would think that I have heard more of their material, but just like the reviewer of their last effort, “Black Magic”, my familiarity was minimal at best. I knew the name, but that was about all. Between the three years that have passed, the crew has persevered Mad Child’s drug addiction, the collapse of their former label, and a handful of legal problems. Nevertheless, Swollen returns with “Armed To The Teeth”, which features guest appearances from Tech N9ne, Glasses Malone, and Talib Kweli, among others.

From the jump, SM makes it known that they are indeed back to “Reclaim The Throne”. In fact the first few songs make quite the impression on me. CJ the Prodigy wails on the electric guitar on “Porn Star”, which is irony at its finest. Original group member Moka Only makes an appearance on the hard hitting “Red Dragon”. The crew seems to be able to switch it up and rock different styles of production at the drop of a hat. Tech N9ne shows up and lends a verse to “Bollywood Chick”, and true to its title, the Rob the Viking production has hints of Hindi sounds. Mad Child finds himself reliving his difficulties with drugs, but is quick to blame no one but himself as he claims “this is Mad Child’s life, and I’m fuckin’ it up” as he raps:

“Tens, twenties, forties, eighties
Mad Child poppin’ more pills than Slim Shady
Cash, cars, strippers, models
Traded all of that for little pills in a bottle
Oxyies, Percocets, Vicodin, Somas
Doesn’t really matter, long as I am in a coma
[…]
All I do is watch movies, stoned alone on my couch
And pass out with a lit cigarette in my mouth
I got cigarette holes on my couch, on my clothes
Cigarette burns in my house, on the floor”

It’s good to see that he’s been able to manage his addiction. I would assume that getting everything out on wax would prove to be fairly therapeutic. The closing moments of “Here We Come” and “Warrior” both contain pieces of audio from the 1979 film, “The Warriors” and the latter also features Tre Nyce and Young Kazh. One of the standout tracks is the somber “Funeral March”, which features the vocals of Barbie Hatch, the guest rhymes of Saafir, and the guitar of Russ Kline. One of the album’s biggest head scratchers (no pun intended) is the Auto-Tuned to death, “Flyest”. It feels forced and doesn’t seem to fit in with the rest of the album. Another head scratching moment is the posse cut, “Crossfire” which doesn’t even hit the three minute mark before it’s over. I think that a joint featuring Krondon, Phil Da Agony and some dude named Talib Kweli could have been longer.

The Auto-Tune makes another appearance on the closing track, “Real P.I.”, which features Los Angeles-based Glasses Malone. He and Mad Child deliver decent verses, but the song is dominated by the tool that many have dismissed as a gimmicky fad or crutch. As it stands, my initial impression with Swollen Members is that they have what it takes to deliver the goods over various sorts of tracks, but it seems that they are at their best with the darker beats. I’ll have to backtrack into their catalog to see if I’m right about that. As for this album, the members were certainly armed, and they seem to hit more than they miss.