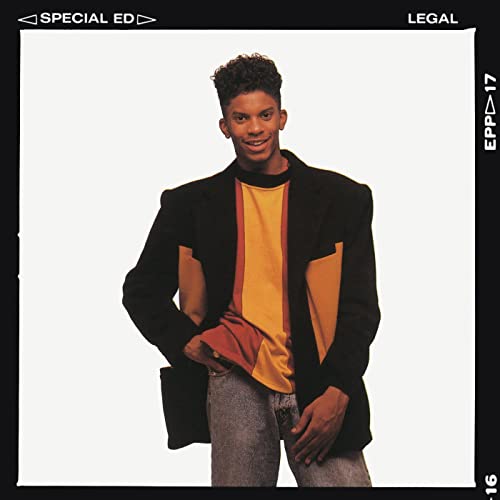 Having established himself as a hip-hop star at just 16 years old with “Youngest in Charge,” the biggest challenge Special Ed faced on his sophomore album was proving it wasn’t a fluke. Super producer Hitman Howie Tee launched his career into the stratosphere with the iconic rap song “I Got It Made,” and off the strength his full length rose to No. 8 on the Billboard R&B/Hip-Hop charts. “Legal” was his chance to make a statement as a now adult aged rapper, although Howie Tee was still the man behind the man making things happen. They were off to a good start on the Ian Fleming inspired and James Bond sampling lead single “The Mission.”

30+ years have not changed my affection for this song. Even though the set up for the accompanying music video is “The World’s Greatest Liar” contest, his story of international intrigue and espionage is more than convincing, it’s a damn movie — and that’s exactly what they made it into. It’s a shame they only had five minutes to do it. “You must die because that is my mission/He flipped back, got into a fighting position.” At this point while revisiting the song I noticed something I hadn’t before — the same Fred Wesley and The J.B.’s “Blow Your Head” sample from Tha Alkaholiks hit “Make Room.” Of course Tha Liks didn’t even drop their debut album until three years later, but I’m shocked a teenage Flash didn’t pick up on the commonality between them. From my own memory the second single “Come On, Let’s Move It” was even bigger than the first.

Maybe it only got heavy rotation in my own mind, but it seemed like I heard it every single time I watched Yo! MTV Raps or Pump It Up, and I was never mad about it even once. Howie Tee’s chops at selecting dope beats and then layering up the samples never gets the DJ Premier levels of respect that it should, but the foundation of this one is Belle Epoque’s “Miss Broadway” and it holds Ed down like 16 tons. This shit is so solid that I fully expected it would get played at a high school dance. The scratched in hook and the beat are exhorting you to bust more moves than Young MC, but sadly anything beyond Marvin Young was “too hardcore” for the milquetoast deejays in charge (i.e. my teachers) so that wasn’t happening.

Speaking of not being mad, even though “I’m the Magnificent” had been featured on his last album, I didn’t have any objections to “Legal” including a remix of it then or now. Three for three Edward and Tee, congratulations. How does the rest of the release hold up though? “I can rock a beat, plus rock a rhyme/I feel it’s time to show my full versatility/Nothing is impossible, I have the ability” raps Ed on “Ya Wish Ya Could” to a fly “Superman Lover” sample. Damn it these brothers just can’t do wrong and there’s something so refreshing about Ed’s self-confidence. It’s not arrogance, it’s not bragging about all the things he has, it’s not a dick measuring contest for how much punani he gets — it’s just “hey check me out I’m good on the mic.” Yes you are Ed, that’s what made you so Special. R.I.P. Keith Elam (Guru) on the hook. I’m trying to remember who sampled Ed saying “look what we created and we made it for fun” on THEIR song but it eludes me.

It’s hard for me to pick many flaws to this album, but “5 Men and a Mic” might be one of the weakest posse tracks of the era. Howie Tee doesn’t produce it (that’s strike one) and the special guests are 40-Love, Akshun, Coolie Man and Little Shawn (that’s strike two). The only one of those brothers I even remember besides Ed is Shawn, and that’s because of his song “Hickeys On Your Chest” produced by WHO? You guessed it, Hitman Howie Tee. The fact this song is five minutes long is the third strike, and you’re OUTTA HERE.

If that’s the only objection then “Legal” is not being overruled in hip-hop court. Familiar beats and breaks help make songs like “Livin’ Like a Star” and “Ready to Attack” hype, but it’s the velvety smooth lyrical butter that Ed spreads on the instrumentation that makes it all pop like popcorn. I could take or leave the album’s finale “See It Ya” self-produced by Ed, but that’s still eight out of ten quality songs. Say, that’s a good score for this album. Eight out of ten. Let’s leave it at that.