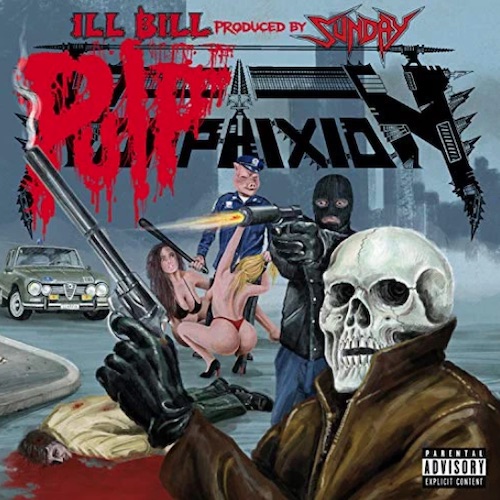 If there’s a poster child for conspiracy theory it’s William Braunstein. For as long as I can remember listening to him dating back to the Non Phixion days, Ill Bill lived up to his nom de plume spitting some of the illest facts heard on rap. That’s not to say every word is true or credible. The mere act of writing something down, saying it aloud, broadcasting it through the air or transmitting it through the internet doesn’t make it a fact. Frankly this goes for what you’re reading on this website and what I write too. Don’t assume that I’m always right or that everything I print is accurate. Fact check me at your discretion and feel free to contact me when I’m wrong. I don’t take Ill Bill or any similarly minded rapper when they bring up vast Illuminati sized conspiracies. The point here is that I’m entertained by Bill’s perspective and enjoy the tangled web that he weaves from disparate ideas.

“Pulp Phixion” is a relatively bite sized package of those ideas as opposed to the three course meal you might expect, let alone buffet of Braunstein that he delivered on past releases. There are four songs and four instrumental versions in total, with all tracks produced by the calendar inspired beat maker Sunday. Here’s a fun exercise — try Googling any combination of “Sunday” and “producer” and see if you can come up with his profile or bio. I certainly couldn’t. Those two words are so common as to completely obfuscate who Sunday is, which I admit may have been his intent all along. Either way the gothic cathedral of sound he brings to “Axe of Abraxas” certainly sounds like a Sunday service. With guest appearances from Sick Jacken and Lord Goat (f/k/a Goretex) it sounds like classic Non Phixion.

And that would be the reason for calling this EP “Pulp Phixion” wouldn’t it? It would obviously be impossible to recreate the atmosphere that formed around Sabac Red, Ill Bill and Goretex back in the late 1990’s and early 2000’s, but as the man who most consistently releases solo albums and collaborative efforts, Braunstein is well equipped to carry their torch. There may now be an “I Shot Reagan” or “Rock Stars” here, but hearing Goat and Bill rap on the macabre “Shoot First, Die Later” is arguably as close as we can get in the present day. I’ll take it.

The shame of it all is that this EP takes what’s clearly a dope collaboration between Ill Bill and Sunday, drops it in your lap, and then walks away with no indication it was anything but a one off. “Pulp Phixion” works well enough to be a full movie and not the “coming attractions” that air before a long film. Rather than simply padding out a short effort into a longer one by doubling up the tracks, Sunday’s instrumentals stand on their own in the second half as worthy of repeat play. The sharp percussion, wavering synth and discordant piano keys of “Debbie Abono” draws me in every time. If this is the kind of work he puts in at random with no warning, I want to see what Sunday can REALLY do given a much bigger platform to stand on. I already know Ill Bill can spit so his new partner-in-crime on the beats was the most pleasant surprise about this release.