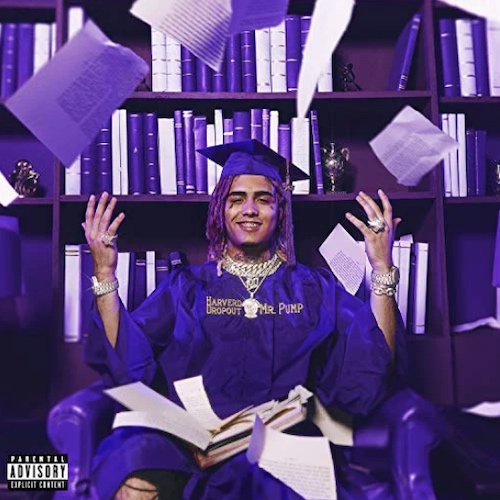 “Did so much molly I think I damaged my brain”

Aside from the obvious humor of that quote the only think I can think when listening to “Fasho Fasho” is “Gucci Gang, Gucci Gang, Gucci Gang, Gucci Gang.” In the two years following the viral success of his hit single and self-titled debut album, it didn’t sound like Lil Pump had changed his style or delivery one bit. He didn’t evolve by the time “Harverd Dropout” came out. Why would he? Once you’ve made a song that’s done over a billion views (yes that’s BILLION with a B) what incentive is there to change anything? It’s actually a miracle that he made a second album at all given he could have banked off that one hit for the rest of his life.

At least with that fame Lil Pump was able to reach out and collaborate with big names like Lil Wayne. He’s even got a good point about how once a rapper (or for that matter a singer, actor or athlete) succeeds, everybody wants to copy what they do as though the mere act of cloning guarantees similar success. As Dwayne says about his “mini-mes” on the track, “I see these look alikes, it kinda sucks though.” True — and so does the CBMix instrumental. It’s a shame because I like the collaboration, I like the concept, and yet the two or three off key notes CB stabs repeatedly make it unlistenable to me. Unfortunately his influence is heard throughout the album and it never gets better. “ION” featuring Smokepurpp is equally monotonous and repetitive, and somehow less musical at the same time.

Why couldn’t he have brought back Bighead and Gnealz? If he was going to keep rapping the same way he did on “Gucci Gang” he could have at least made it sound like “Gucci Gang.” Instead we get shockingly awful tracks like “ESSKEETIT” from CB which somehow managed to do a half billion views (as of this writing). I’m not sure what that says about people. Either they just decided to ride or die with Lil Pump from “Gucci Gang” on regardless of the quality of the music, or there’s a whole hell of a lot of people who enjoy hearing electronic farts echo around in trash cans.

It was genuinely difficult to find songs on “Harverd Dropout” I could stand to listen to long enough to appreciate Lil Pump or his multitude of guests. “Vroom Vroom Vroom” kind of works if all you want is to rattle the trunk. Cubeatz and Ronny J don’t even try to make it a song — they just want you to test your subwoofers — but that beats actual songs like the Fizzle produced “Stripper Name.” The blatant misogyny of 2 Chainz, Pump and YG is sadly the least of the track’s problems. The instrumental sounds like a puppy being beaten with a stick and whimpering in pain and fear. If you think that’s an exaggeration listen to the song for yourself.

Diablo almost has something on “Drop Out.” It’s not exactly creative to walk up between two notes in equally spaced intervals and then loop it, but the combination of the electronic sound and the percussion works a lil’ bit. It pains me to tell you that the only “good” (using that term super loosely here) song features Kanye West, but “I Love It” actually sounds like a proper song. It’s got a melody, it’s got layered instrumentation, it’s got change-ups in the sequencing, it’s got random percussive knocks that grab your attention. CB got a credit as co-producer, but I will award most of what works here to the rest of the crew — Kanye himself, Ronny J, and the legendary DJ Clark Kent.

Even though Lil Pump has clearly got the “viral” thing down based on the look of the “I Love It” video, since it did a hundred million more views than “ESSKEETIT,” just going viral isn’t enough here. Pump wasn’t a good rapper on his debut and I wanted to see some progression, but “Harverd Dropout” turns out to be a blatant lie. You have to get admitted to an institution before you can drop out of it, and with beats and rhymes like these he’s not getting into an Ivy League school or even a land grant college. I didn’t think it was possible for Pump to go backward after being so successful his first time out, but this album proves that “Gucci Gang” was his high water mark.