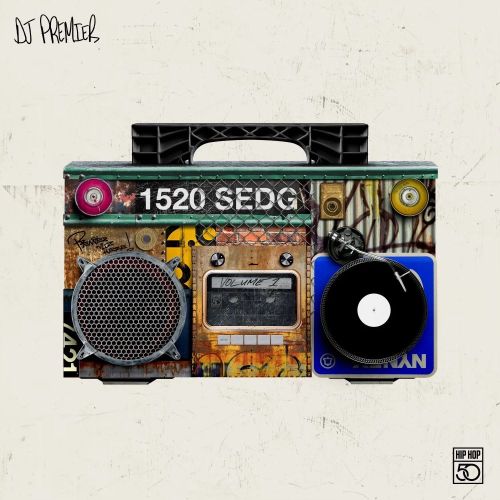 Okay, ladies and gentlemen. Calm down, please. You at the back, whooping and hollering, cut it out! No, this isn’t the long-awaited Nas album we were promised in 2013, nor is it the forgotten Terror Squad album that never surfaced. Even worse, it’s not the NYGz album we were teased with in 2010, 2013, and last year. Even in the rollout for this project, the Gang Starr producer admitted he gave Kendrick Lamar ten beats. But if anyone’s allowed to share stories on what they are working on, it’s DJ Premier. His series of YouTube videos called So Wassup? is a captivating trip down memory lane with all sorts of interesting context behind his 1990s production, without ever exposing the magic formula for how the beats were made. The fact that he has embraced technology throughout his career, from floppy disks to DATs, to CDs, through to Serato, Instagram, and Twitch, it’s hard to argue anyone embodies hip-hop as much as DJ Premier. His style screams New York authenticity (despite being from Texas) and there is nobody better to kick off a celebration of hip-hop’s 50th birthday.

That’s what this brief EP is, essentially. The label Mass Appeal (founded by Nas) is releasing 10 EPs, each including five songs apiece. So that’s 5×10 = 50. A portion of all “Hip Hop 50” proceeds will be donated to various charitable organizations, including the Universal Hip Hop Museum set to open its doors in 2024. The other producers involved are as follows:

You’ll notice two things here. That’s only nine producers – this is because the tenth will go to a public vote on who will make the final EP. It’s highly unlikely to be a Rick Rubin or a Grandmaster Flash, and it should be Dr. Dre dropping “Detox” if anything, but that brings me to the second observation. There is a heavy bias toward recent names when a celebration of history needs to emphasize those that made hip-hop what it is today. Obviously, it won’t be perfect (who’s calling up Bambataa for new material?) but it’s a noticeable flaw in such an undertaking given the first sixteen years aren’t represented. Let’s celebrate 50 years, but only the last 34.

Despite this, and with only five tracks, Primo has done well to represent each era. Slick Rick, perhaps best known for his work in the late 1980s, joins Lil’ Wayne for “The Root of It All” – an unexpected combination chronicling the impact of money through their unique perspectives. Hearing Slick Rick alongside Weezy is a novelty that eventually wears off, and the track feels unfinished with Rick’s second verse fading out at the two-minute mark. That’s probably my primary criticism of this EP – it’s pieced together at relatively short notice with Premier acknowledging that these are redirected records previously recorded for different projects. The fact that it came out so well is a testament to the talent involved.

Simply titled, “Remy Rap” (initially recorded for a DJ Premier compilation album) includes some screwface performances atop a mean instrumental. Lines like “y’all cry, I’m on a different tier” and “you do anything for cheese, yeah you been a rat” only confirm why these two emcees deserve showcasing for a celebration of hip-hop.

Purists have been known to criticize Premier’s recent work, but let’s be real, that first “PRhyme” album has aged wonderfully. It doesn’t feel out of place sitting alongside the Gang Starr LPs. His recent beats have been markedly improved too. 2019’s “Headlines” with the Griselda fellas is one of his best beats in years. Even the beat he gave Armani Caesar (“Simply Done”) is filthier than a 2 Live Crew mudbath. Singapore Kane’s “Dreams and Visions” and Russ’ “Free” also sound like regular DJ Premier, but are impossible not to slam your head to. I’m not sure he’d admit he’s in his prime, but he’s on a good run – that’s undeniable.

It’s been twenty years since the last Nas and DJ Premier collaboration (last year’s “Wave Gods” scratches aside), so “Beat Breaks” has a lot to live up to. Thankfully, a revitalized Nas blesses what can only be described as a twist on their classic “Nas Is Like” formula that their later collaborations never quite captured. It’s got that 90s Preem but the way the beat encompasses cleaner instruments highlights why the PRhyme material was not just a side project, but a skillset that has given his production an added potency. He didn’t give Nas no cookie-cutter Preem, this is the real deal. Could you even imagine a full album like this?

The Joey Badass track was initially meant for Joey’s “2000” project which was released last Friday. This feels like the most complete collaboration and the perfect start to a celebration of hip-hop: it’s old and new, lyrical yet accessible, and is the quintessential DJ Premier production on display here. It sits above the other songs as far as quality goes, even the Nas one.

The best beat might well be the Run the Jewels effort “Terrible 2s”, itself evoking memories of Ill Bill’s brilliant “Society is Brainwashed” particularly when El-P lends his tones to it. Killer Mike though, f*** me, he sounds tailor-made for this production to the point where a Killer Mike x DJ Premier EP would be something I’d crawl over hot coals to hear.

One could argue that if you don’t enjoy this EP, do you even enjoy hip-hop? It’s by no means perfect, but a hastily compiled arrangement of Premier beats, trademark scratches, three strong collaborations, and two excellent New York cuts ensure that the next producers releasing EPs in this series have a fair bit of pressure to try and match this, let alone outdo it. In the spirit of competition, itself a key part of hip-hop culture, Primo has laid down the gauntlet.