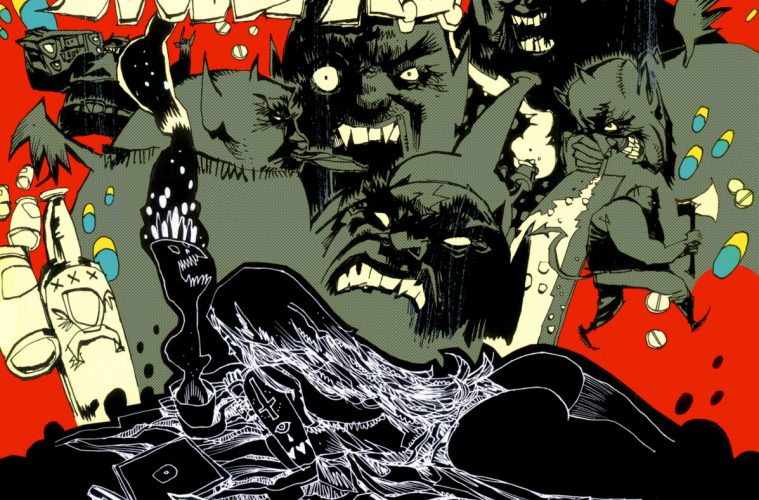 Queens rapper Double A.B. dropped a concept album in May which, on the surface, gives off the aura of a boom-bap type era of New York emcee: Lyrically equipped with multis, a very gutter voice, and street-level rhymes and the wordplay that goes with them. But in listening to “Devils & Drugs”, it becomes apparent that while the album’s narrative is one of drug dealing, it’s not the typical showy “I-been-to-jail-and-I-count-money-and-chop-bricks-nigga” type of affair. A.B. instead chose the route of becoming the urban baron of the one drug that musicians consistently reference and make use of: Weed. In framing himself as a weed dealer, it reminded me of the Notorious B.I.G.’s beginnings on “Ready to Die” as a small-time hood before making the transition to full-fledged kingpin on his sophomore outing.

Starting off with the Kevin Casey-produced title track with heavy piano samples, Double A.B. is in a lyrical conundrum in deciding which one is worse, devils or drugs? Money comes from and goes to both, but it’s still a valid question that makes this intro interesting. Ironically, this album was released the day after the actor’s death, and contains a track titled “Ray Liotta.” Produced by Parallel Thought, there are jazz horns and saxophones while A.B. uses Liotta’s name as a metaphor for staying high, especially considering the actor’s many film scenes involving his characters abusing drugs. Producer Dub Sonata incorporates some vinyl sampling psychedelia for “Mango Mark”, which starts with a movie dialogue sample showing the parallels between a fortune 500 CEO and a street hustler. Lyrically, it’s a first-person narrative about A.B.’s drug dealing and a dedication to his mentor and friend, Mango Mark.

Dub Sonata appears prominently behind the boards and once again helms “The Spirit.” With guitar strings, it begins as a third-person yarn about an out-of-body experience. By the second verse, it converts to a first-person narrative. It’s not enjoyable as it’s the album’s shortest track and contains too many dialogue samples about ghosts. The album does include a posse cut in the form “Rembrandt Death Chant” featuring Breeze Brewin and Napoleon da Legend. Produced by Parallel Thought, the Juggaknots emcee starts it off with his sly monotone delivery. Rapper Eto features on “Black Ice” and his cadence and flow are reminiscent of Jadakiss. Produced by Steven Tapia, the dark keyboard samples and dusty drums make it the most menacing:

The Snafu-produced, smoky Queens anthem and A.B.’s love and lamentation over his borough’s process of change is brought to words on “Clouds Above Queens” while on “Go On In”, the beat has the hardest drum patterns produced here. Laced by Wize Elementz, A.B. raps about the ills of capitalism if one doesn’t understand its ins & outs. Dub Sonata is back on “ALL G” with low key guitar chords and a feature from A.L. as A.B boasts that his “metaphors are never for the narrow-minded.” Dub Sonata makes his final appearance on “Eureka!”, the most entertaining track. Lyrically, it’s a first-person narrative about working with a weed farmer and a business deal that involves a robbery and a fatal twist ending, showing A.B.’s storytelling chops.

As the album closes, we first have left “Elegant Hustler.” Produced by Mes with a degree of polished appropriate elegance to the boom-bap, A.B. brings Harlem rapper Swave Sevah as an assist for a weed dealing verse. Closing out the album is “Clouds Above Queens (remix).” Featuring Foul Monday and Nature, it serves in strengthening the Queens connection between all three rappers. Though it evokes notions of parody by going against the customary drug kingpin hip-hop album and the topic is admittedly redundant, the skill behind the emceeing and the beats on “Devils & Drugs” is anything but.