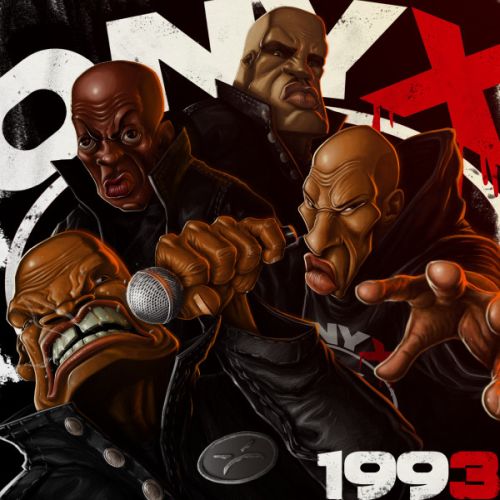 Hip-hop is absolutely besotted with its past, to the point where there isn’t so much a generational divide but a generational chasm. A group as relentlessly vicious as Onyx climbing the charts with their anthem “Slam” (peaking at #4 on Billboard) only highlights how different the 1990s were. Violence and chaos remain the order of the day thirty years later, and the album “1993” revels in its look back at a time where hip-hop was reaching its apex as far as classic albums were concerned. In 2022, you’ll be lucky to find a handful of memorable records, let alone a classic, but 1993 was more stacked than a card game with Dolly Parton. If anyone’s entitled to bask in a period of time pre-social media, pre-streaming and even pre-internet, it’s a group that had a generation shaving their heads. Along with the Wu-Tang Clan, the arrival of Onyx was an important shift in hip-hop, ushering in the grimy, moodier period that saw New York dominate the remainder of the decade. 1993 was our first glimpses of Mobb Deep and M.O.P. too, but they took a couple of years to reach their potential – Onyx were the finished article out the gate, perhaps in part due to their mentorship of Jam Master Jay. Onyx even had a bit of Run-DMC about them with their anthemic warcries and impassioned deliveries, it felt like music that would flourish in a live environment.

Given Onyx continue to tour thirty years into their career only confirms they are the real deal. They are still releasing music that sounds unique, mainly because nobody could meet, let alone exceed, the sheer intensity of an Onyx performance. Last year’s “Onyx 4 Life” had its moments, namely the singles that showcased their ability to still create an earworm of a hook. And Sticky Fingaz is always worth the price of admission.

“Fight Da Power” riffs on Public Enemy’s 1988 classic with the fellas’ own brand of humor giving it a slight twist, however, it’s over before it gets going. This is something that is common throughout – tracks being two minutes long but that is probably why I keep coming back. The obsession with a third verse in the 1990s worked when Onyx had three (or four) members, but with just Fredro and Sticky, it makes sense to go one apiece.

They revisit their own work too. When the beat drops on “Heads Up” it’s Elbow Central and while there’s an element of primitive design to songs like this, it bathes in its own influences without soaking in it. Songs like this work on their own as remixes of classics and there’s enough new here to justify its existence. I keep forgetting just how well the Onyx aesthetic has aged: it’s why their first three albums all hold up today.

The duo revisit “Slam” on “Just Slam” with a lovely bit of trumpet making it a jazzier affair. It’s the drums that do it for me though, you just don’t hear beats like this any more! The acknowledgement of Britney Spears and Amber Rose shaving their heads because of Onyx is typical of the darkly comic lyrics that set Sticky Fingaz apart. I appreciated “United We Slam”, a reference to the obscure Timbo King record from 1993 – the first Wu-Tang Clan affiliate project in a way. But it’s also an interpolation of A Tribe Called Quest’s “Scenario” – a 1991 song. So I wouldn’t pay too much attention to the 1993 criteria outside of this is what was being played in 1993. It’s a mood piece if you want to hear someone in a bad mood.

MC Lyte’s “Ruffneck”, itself a dedication to masculinity, is referenced on “Ruff and Rugged” and revisited outright on “RuffNeck”. Hearing Fredro boast that he doesn’t do TikTok because he’s busy making hip-hop that gets people shot is tongue-in-cheek, but not entirely untrue. This is music to pump iron to or energize a sports team. Ain’t nobody dancing to this outside of slamming a neck and punching a wall.

Where the album “1993” may be a bit chaotic in its structure, it’s a surprisingly strong listening experience. It never dwells on things being better back in the day, instead simply putting an Onyx spin on older tracks. The kicks and snares all slap harder than E. Honda in Street Fighter II, and when you consider this was all recorded in one day, I take my hat off to Fredro and Sticky – if only to show my bald head in appreciation.