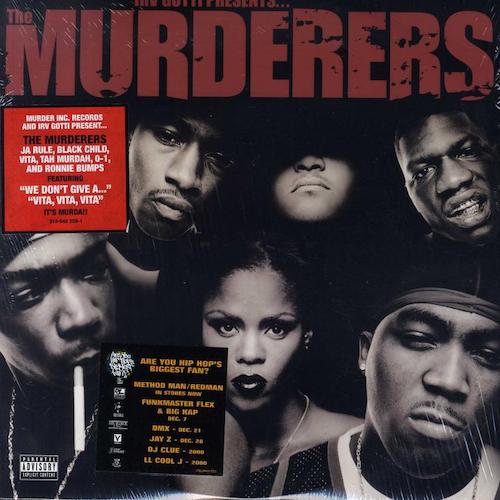 Irving “Irv Gotti” Domingo Lorenzo Jr. had a great run in the 1990’s and early 2000’s. He went from producing hits for other rappers to owning and running Murder Inc. Records and signing artists to be the future of East coast rap music. Despite being investigated for allegedly being a money laundering operation for Supreme, Gotti and his brother beat the charge and kept right on rolling. The label changed names to avoid some of the negative publicity associated with those charges, but whether Murder Inc. or The Inc. people knew that Irv was the man and being on his side was a good way to get your break in the biz and become a star.

LaVita Raynor b/k/a Vita seemed like she’d be the next to blow out of the Inc family. Her self titled single “Vita, Vita, Vita” was made the featured track off “Irv Gotti Presents The Murderers” in 2000. They certainly weren’t taking any chances with her push to stardom — Ja Rule, Tah Murdah and Black Child all made cameos to reinforce that they were behind her 100%. The funny thing is she out of everybody in Murder Inc. probably needed the least help. Her sister was in Bad Boy’s R&B group Total and she had already appeared in several movies and music videos before this single dropped. In fact she provided the hook to one of my favorite Mobb Deep songs — “The Learning (Burn).” Vita should have been a sure fire rap superstar.

To my surprise then AND now Vita’s career promptly went nowhere. Her major label debut “La Dolce Vita” was never commercially released and wound up as a bootleg digital mixtape instead. A second mixtape in 2012 garnered little attention (we didn’t review it — I didn’t even know it existed until now) and she’s basically faded into obscurity. To be honest though that’s true of nearly everybody on “The Murderers” other than Ja Rule and the late great Earl Simmons.

That’s the curse of Irv Gotti compilations in general. While Gotti’s ambitions to be a music industry mogul were on point, and his production skills had resulted in many hits for artists who worked with him or signed with him, the label seemed unable to translate his magic to the fam. There’s probably only one song you know from this album and it’s not necessarily Vita’s — it’s the “Holla Holla Remix” from Ja Rule where Murder Inc. and Roc-A-Fella got together for a massive collaboration. Busta Rhymes showed up too because in this era you literally COULDN’T do a remix without him being on it.

Other than those two songs this album is bloated by forgettable songs and even more forgettable skits. Almost every other track is some sort of cornball or cringe-worthy skit. I didn’t need to hear Ja Rule imitating a black pastor yelling things like “The Lord says pussy is a good thing. New pussy always make you feel great. Can I get a motherfucking amen?” UGHHH.

The topic matter of “Shit Gets Ugly” and “We Murderers Baby” personifies this album. All of the Murder Inc. rappers brag about how much money they make and how tough they are, and Ja Rule gets unnecessarily homophobic regarding how much he doesn’t like dick even though he’s rapping with a chick who probably does (doesn’t even matter if she doesn’t though — it’s her life to live not mine). The fact they are dubbed “The Murderers” seems to have rubbed off on the entire clique for the worse. Every song is about how much they kill shit on the mic or in real life.

Even when the production is tight the topic matter is monotonous to the point of being regrettable, and at 80 minutes long that’s a LOT of bad skits and tracks to sit through. They are so desperate to prove how murderous they are that even as the album is winding down they have to load it up with tracks like “Crime Scene” and “Somebody’s Gonna Die Tonight.” I’m all for rappers making albums that are cinematically violent (it definitely beats seeing rappers be murdered in real life) if the story is as compelling as “Scarface” or “Goodfellas,” but this is just one scene being filmed over and over again until you have to turn your head away and not watch any more.

“Irv Gotti Presents The Murderers” is unnecessary. It has a few A and B level rap stars, and maybe even a C level or two who could have moved up, but they are lost in the sauce thanks to the presentation. Even when Gotti and his co-producers make listenable tracks, hearing Ja Rule rap one too many times about “niggaz acting like broads” kills it for me. I’ve always had an ambivalent relationship with Ja anyway — I love his charisma, I think he has catchy hooks, but his bars can be sus even at the best of times. This album needed to lean on him heavily to succeed though and although they tried hard the album died hard. It took three years before it was finally certified gold and besides this review I don’t think anybody has cared about it since.