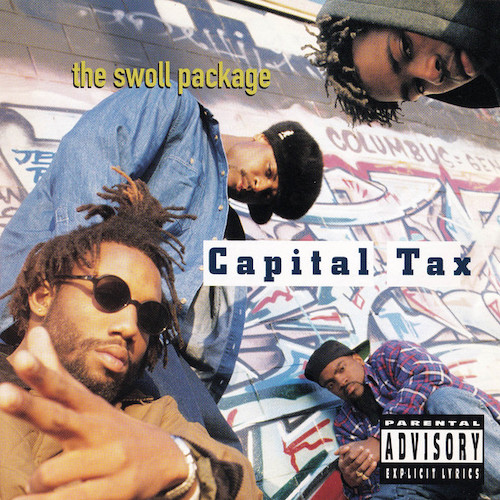 It’s admittedly a bit strange that I remember an artist better for a remix that didn’t appear on their album, but I think with Capital Tax a/k/a T.M.D. (Total Mind Devastator) you’ll soon see why. The mid-1990’s were a prime time for me to discover artists through 12″ singles, thanks to my gigs at college radio and my friendships with similarly motivated hip-hop heads online. As a big EPMD fan one such single immediately caught my attention, and that was the remix of T.M.D.’s “The Masha.” The first 14 seconds don’t betray what’s about to come, but once the words “Well alright!” are uttered the loop hits you in the head. If you’re like me you probably started mouthing the words “Please listen to my demo. Plea-please-please, p-please listen to my demo.”

Of course there’s no law against sampling Faze-O’s “Riding High,” and DJ Smooth G would not be the first person to flip it or the last. Kris Kross, Black Moon, The Roots, Snoop Dogg, the list goes on and on. For me though the loop is permanently associated with Erick Sermon and Parrish Smith, but it didn’t make me think lesser of Capital Tax. In fact T.M.D.’s voice reminded me of Nine (“So what’cha want Nine?”) which blew my mind when I found out he was from Oakland. His gruff rough voice was quite infectious over the Faze-O loop and the lyrics pop whether listening to the mellow remix or the more intense original version.

“Uh-huh, uh, the funky rhyme kicker can you dig it
And I could give a damn about a racist or a bigot
So swing it to KKK and all you phonies
I mash on that ass so bump my tape like in your Sony
No bologna, the rhyme style kid, is back to wreck it
Mic check it, so you best to like respect it”

Promo vinyl only gets you so far though, especially back in the 1990’s when a good music video was like a free commercial for your album. “I Can’t Believe It” did an excellent job of showing off T.M.D.’s vibes and skill. He tells a first person perspective story of a family being torn apart by poverty, drug abuse, and stick up kids that (naturally) are out to tax. The stick up kid in this case is T’s cousin, who is apparently the only bread winner or sorts in the entire family. It’s a bugged situation.

“But yo, I’m tryin’ to get this shit
Yo why there’s no food on the table
and yo, who’s payin’ the rent?
While James Earl was thievin’ on the banks
with homemade shanks, tryin’ to scuffle up his rank
But I can’t, go out that way, so yo I pray like every night
to God that he let my cousin see the light, right?“

I didn’t need anything other than these two songs to convince me to buy “The Swoll Package” back in the day. I’m glad that I did even though it seems like time has not been kind to T.M.D. It looks like MCA Records never really had his back because he was one and done with the label. A digital only comeback in the 2000’s made so little noise that I’m only now discovering it. You can’t find a Wikipedia entry for Capital Tax and I get the feeling no one was looking for it other than me. That doesn’t stop songs like “Mista Wonka” from being “the flavor” though. He builds off Roald Dahl’s character but in this case “Willy” is the man below his navel who developed a sudden case of erectile dysfunction.

It’s a clever turn of events and “clever” is an accurate word for T.M.D. in general. Even though his career seems to have come and gone without making a big impression on the mainstream, songs like “Make Some Cash” made a huge impression on me. There was an ominous urgency to the song’s tempo and instrumental, I loved (and still do love) the Slick Rick sample, and Capital T pulls no punches about going to any lengths to get it. He actually comes up with a legal (I presume) hustle about pumping people’s gas for cash tips, but even this proves to be a bit dangerous.

“Now, no time to hesitate, I gots the problem solver
Dug in my pocket for the 22 revolver
And if he don’t step I drops the bomb like Pearl Harbor
Word to life, I think he oughta
Cause I know, that he don’t, know what time it is
But I do, know that he shouldn’t be shortstoppin’ the kid
Here’s what I did, stepped real smooth, to the swindler
and said, hey yo bro, you know you gots to go
cause this here is my turf, my nine to five
How I survived? I guess he sorta sensed the vibe”

DJ Smooth G may have had a penchant for familiar beats and breaks, but with songs like “Styles I Manifest” I wasn’t mad at it one bit. I feel like I should point out again that T.M.D. and his homies were from Oakland. This doesn’t sound like the Hieroglyphics, Too $hort, The Click, Mac Dre or The Coup. I would have sworn T was from NYC if I didn’t know any better.

Is “The Swoll Package” the most essential 1990’s hip-hop album? Not really. The production can falter occasionally, and having the remix of “The Masha” on here would have helped a lot, but so would MCA having released a music video to support it. For me everything about Capital Tax was a happy accident of being in the right place at the right time, and I get the feeling his recording career might be a very similar story. Record labels were signing more artists than they put out (too many albums to name were recorded and shelved without even dropping) so the fact “The Swoll Package” exists at least means T.M.D. can get his 15 minutes of fame today. Many promising rappers never got that chance at all, but in the words of a famous hoodie wearing YouTube creator, “Did Capital Tax deserve better?” Yes. Yes he did.