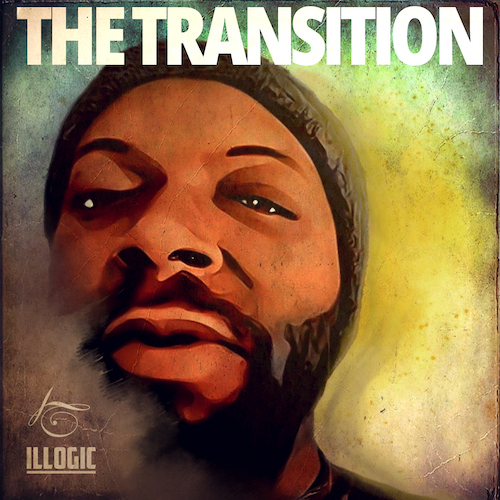 There are a few emcees who I look forward to listening to just because of the pure joy they exhibit in rocking a microphone. Pharoahe Monch, Lyrics Born, Slug, the late Gift of Gab, and of course Illogic. That’s neither the beginning nor the end of the list, but I’m going to stop there so we can talk about Jahwar Glass and his latest project “The Transition.” The feeling I draw from each of them is that rapping is more than just beats to the rhymes or vice versa. We all know emcees who spit to make you laugh, to show you how hard they are, or to impress you with the size of their intellect. Then there are the rare few like Mr. Glass who take a more deeply personal approach. They have clever punchlines but even more revelatory words that lay their inner soul bare. It’s as though their bars are Old Faithful — pushed upward by geothermal forces because the pressure would otherwise be too much to hold. They rap like it’s as vital as the air we all breathe.

That’s what 20+ years of listening to Illogic feels like. His words are a never ending quest to build an enduring legacy. Now we can debate about why artists are compelled to lay the bricks for an eternity. Do they want us to look upon their legacy like Ozymandias? Time and tide will turn and destroy it all eventually. Do they want to be worshiped as a living legend? I don’t get that level of egotistical entitlement from Illogic. Sure, Mr. Glass knows he’s good. You can’t rock a microphone and record it for retail release without the confidence people will want to listen to it. He is humble about his work though, never demanding fans give him flowers even if he deserves it. Is he showing off regardless of the laurels? That might be his only sin, and it’s one I’m prepared to forgive, because when he does so on songs like “Play to Win” the real winner is the listener.

“Some saw this pursuit as trivial, needed a miracle to make it
but he boggled the mind with the word placement far from basic
Took no chaser, shot it straight, plus his poker face was perfect
Would this walk on the river be worth it?”

How could I not love this track? Not only are samples of Big Pun and MF DOOM scratched into the hook, but Illogic is directly addressing the very reasons great emcees are compelled to speak their truth into existence. “Momentum is easy to get but harder to maintain/the whole process is a never ending game.” The soft samples lilting in the background are in almost direct opposition to the seriousness of the message. If you didn’t get the picture he painted with this song he even provides a postscript in the form of an interview snippet. Mr. Glass explains that once the bug bites and you’re “learning how to be a phenomenal rapper to stand out from the crowd,” you still have to “practice it every day” like Kobe Bryant taking jump shots at the gym when nobody else is there. You might “Play to Win” but if you don’t put in the effort you’ll never win the game. When you half ass you get “Nowhere Fast.”

“I’m too clever to make fans/I make friends” quips Illogic. He’s not wrong. I feel uncertain reviewing an album like “The Transition” because over the years of covering his music, we’ve exchanged pleasantries to the point that he’s more than just the next item on my checklist of things to do. To put it simple and plain I like Jahwar Glass. It’s dangerous for someone who wants to criticize things for a living to then apply it to people they like personally. You fear the bias that might creep unknowingly into a review, or worse yet you might deliberately overrate it OR underrate it trying to prove you’re not biased.

I’ve been writing for as many years as Illogic has been rapping though so I hope you’ll take my word for it that “The Transition” did not disappoint me as a friend or as a fan of his work. He makes rap songs that he’s fully invested in, never phoning it in on a track or recycling old material while pretending it’s hot new shit. It’s not at all strange to hear him say he considered retirement when you consider the effort it takes to stay at the top of the game year after year, but if you’re giving flowers to Nas for that reason, throw a few Illogic’s way too.