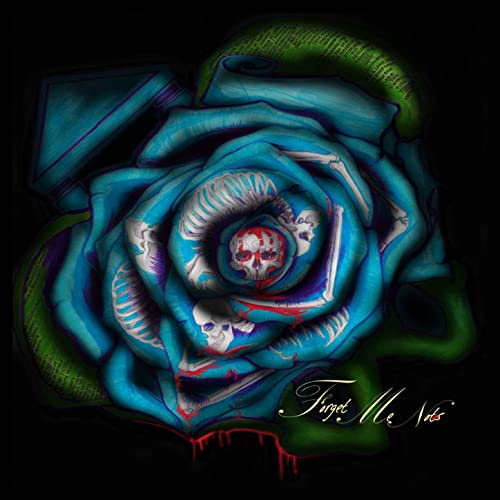 We Are Band Nerds :: Forget Me Nots

With a name like We Are Band Nerds there’s no question this is a self-effacing rap group. Or is that a nu metal group? They don’t seem like they’re out to pick a lane. In fact their motto seems to be “Why stick to one genre when you can slay them all at once?” Fair enough. I was idly searching for something new to listen to and struck gold on “Forget Me Nots.” The song “Whore (Mend My Soul)” instantly reminded me of Rage Against the Machine, In This Moment and Linkin Park. I don’t think they’d find fault with any of those comparisons given they refuse to be pigeonholed.

The track “Savage” took my earbuds in a completely different direction. This time the vibe fell somewhere between Nirvana and Seether, although the bass definitely gave me Fieldy from Korn vibes — thankfully without his attempts at rapping. As far as the rapping goes, W.A.B.N. have Brandon Cross and Tony Lucas sharing those duties, while Carlos Juarez (a/k/a DJ Sol*Los) handles the turntables. The rest of the band consists of Dorian Thomas on guitars, Stephen Bonilla on drums, and Santos Johnson doing his best Reginald Arvizu on that bass. I’m not sure what force brought them all together but they sound like a tight and polished musical unit.

If there was any doubt that they are Band Nerds as well as hard rocking rap metal heads, the fact they have a track called “Hunger Games” solidifies their claim to fame. I would have been disappointed if the whistling notes heard throughout the movies wasn’t sampled and repeated throughout the song. I’m still team Hayfie by the way, and was inordinately pleased when Mockingjay Part 2 at least teased the idea, though ultimately that ship will be reserved to the seas of fanfic. I’m a band nerd too. Couldn’t you tell?

I’m perplexed by the void “Forget Me Nots” seems to exist in. The album got some mainstream exposure, but not the amount that something as well produced and performed as this should. I also can’t remember ever hearing their music on SiriusXM, although it would definitely be at home on Octane or even a more throwback oriented channel like Turbo. I suppose it’s possible that they are too good? Brand new acts are not meant to come out with their sound so well defined. That may suggest there was a decade of demos and jam sessions before “Forget Me Nots” arrived, or it may be that they’re just so good that they hit the ground running and didn’t look back. That’s the kind of thing that would piss a lot of major label acts off, and if you don’t get on tours and get radio airplay, it’s hard to make any headway.

Ultimately I don’t give a damn why I’ve never heard of We Are Band Nerds before now. I’m just glad I discovered their music even if it was completely by random. Perhaps their inability to accept labels or be defined by one sound is being held against them by the music industry, but it doesn’t change my personal opinion of W.A.B.N. one bit. I like their music and this album leaves me wanting to hear more of what they have to say.