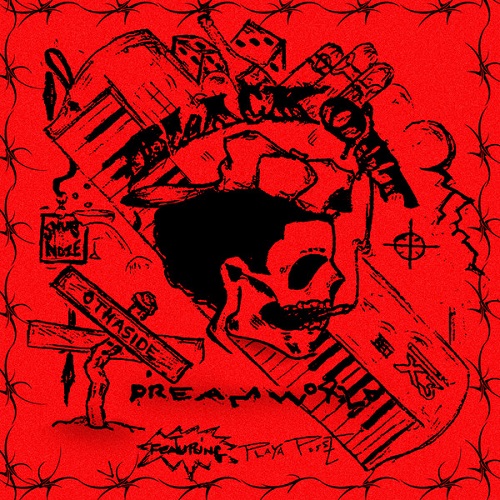 I need to introduce this “Best of 2022” list by saying: I mostly buy records, tapes and CDs – my listening is limited to what I buy and what I choose to buy or decide I can afford. So, this list isn’t really a meticulous weighing up of all major and minor hip-hop releases of the year. Instead, here are some highlights from what I’ve been listening to hip-hop wise this year.

Trill Hill Tapes have been giving me an education in 1990s Southern Hip-Hop tapes with their growing list of limited reissues and previously unheard goodness. I won’t pretend to have a great knowledge of Southern hip-hop, especially the obscure and, I’m guessing, classic tape-only releases being reissued. Some of these are just as unapologetically violent and maniacal as records like Gangsta Pat’s “Deadly Verses” or early Three Six Mafia. The previously unheard sequel to Blackout’s “Dreamworld”, “Dreamworld: Othaside”, includes mesmerising repetitions of choruses to loops of ringing bells, tinny snares, intermittent bass booms and “Halloween”-soundtrack style creepy piano tinkling. A favourite track is the mesmerising, “I Warned You (When I’m…)” which just consists of a beat and the repeated, occasionally truncated lines “When I’m on that dope with the scope beamin’ on your back”, “hearing screams, hearing screams, trippin’ off the shit”. And, it’s compulsively re-listenable; a slow, looping gangsta rap mantra. Other highlights in the Trill Hill batch were two Memphis groups: Bloodline and their 1997 release “Dreams, Screams and Nightmares” and 2nd Family’s 1997 “Killaz From the Blackside”.

Fxck Rxp kept up their great work with a release of MC’s Ankhlejohn, Da$h and Look Damien!’s album “Honey Sweeter Than Blood”. This one grew on me – at first, I wasn’t convinced by the eerie, horror film sounds of piano and strings on many tracks and its shift into cruisy, relaxed production on the B side – I’m not sure what flipped, maybe I embraced the horror, or the ’90s Memphis underground has had its influence on me. Ankhlejohn switches his usual style on some tracks, rhyming in quick streams of words, broken up by short rests. Look Damien! has one of the best producer tags I’ve heard: a sample from “The Omen” in which a nanny joyfully cries out to devil boy Damien, “look at me Damien – it’s all for you!” (in the film the nanny proceeds to hang herself). “Folgers” is a highlight – slumping forward with a loop of sombre electric guitar chords, eerie strings and intermittent booming kicks. Both MC’s lean into the grimness: Da$h reflecting on poor choices with women and chastising fake actors while Ankhlejohn sets his verse off with the strikingly grim “shoot first and ask questions later / pops got lung cancer, pulled the plug out of the respirator” – a complex impression of hardened emotions, care and ruthlessness condensed into two lines. “Dipset Reunion” is perhaps one of the best tracks on the album, partly because of Ankhlejohn breezily running through solo verses, but mostly because of Look Damien!’s bright production sampling lilting strings, guitar lines and chipmunked soul vocals.

One of my favourite MCs, Lynn, Massachusetts’ al.divino’s “Facemelt 3” was released on vinyl by the reliable label Good Felons. This is perhaps one of the strangest highlights on the list. And, before I go into why I like it, it might be good to mention that, at the time of writing this, the only two comments on Discogs include phrases like “waste of time” and “incoherently babbling”. Good Felons have sold more than two records, so it’s hard to use these comments as an indication of how the EP has been received – I only quote them because the release is only around 15 minutes of music, with little of the style of rapping that al.divino found popularity with on earlier releases. But, I like it – it’s not his best release, but in its short time runs through a smooth, unbroken mix of eight beats accompanied by, not “incoherent babbling” but what sound to me like freestyles. In the two available videos of al.divino freestyling on Youtube (“Supreme Body Bag Freestyle 2018” and “1000 Shots Cypher”), his style is very similar to that on “Facemelt 3”. Moving away from the staccato-like bursts of internal rhymes that defined earlier releases, al.divino freestyles with an emphasis on drawing out words and slurring lines into each other – many lines on “Facemelt 3” punctuated by energetic adlibs like “aint have shit!”. It’s pure speculation, but I imagine this record is all or mostly freestyling. Yes, hip-hop is about lyricism, but it’s also about voices and sounds. And, al.divino’s gravelly, raspy voice shines over this production. I’ve had this in heavy rotation.

Probably my favourite record of the past two years. Queens, New York MC Hologram had been killing features for years before this – the most memorable perhaps being on Westside Gunn’s “Thousand Shot Mac”: “She queefed melodically, in Greek mythology / Nike is the goddess of victory and that’s lit to me” – surprisingly, the second reference I’ve heard to feminine flatulence in hip-hop (is that two too many?). I think Hologram’s style and lyrical content has a lot in common with deadpan comedy, and the personality of Joe Pesci’s Tommy DeVito in ‘GoodFellas’; jokes are made hand-in-hand with violent threats, and lyrics often reflect an equally gregarious and threatening personality. Standout track (and really, I love most of this album) is “S.T.F.U.” – a wavering sample of a man singing what sounds like a lyric from a psychedelic record from the 1970s, setting a scene for Hologram to deliver lines like “1980 military variant mini uzi / I’m the righteous wavy militant villain in any movie…”. A debut worth the wait.