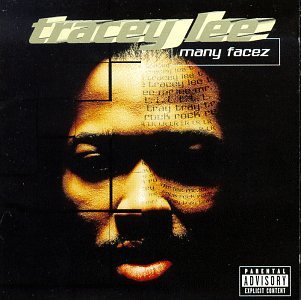 First releasing the single “The Theme (It’s Party Time)”, now Tracey Lee releases a complete album, titled Many Facez. The Philly born artist wants to show his versatility on the mic, with his five different personalities – Rock, Mr. Lee, LR, L, and Tray. With that, a well equipped soldier has arrived; armed with a verbal arsenal of mythic personalities.

This CD could be compared to a toned down Biggie Smalls (RIP) album, who incidentally, appears on a song on this album. Both of them team up for “The Professionals”, a cut about how they go about their business. If your deck is weak, watch out, cause he’s: ‘Killin your Maxell/Unveil lyrical skills/Unknown/For my peoples with illegal cell phones/And rip MC’s/Let’s bring it back home/Live from the 215/They lost the backbone/In charge/And heavily armed like Brett Favre’ (track #14 0:59-1:12). Biggie’s rhymes on this track are no different than any other. He tells us how he’s livin. ‘I got a new mouth to feed/I’m due South for keys/Y’all picks seeds out your weave/I watch cowards bleed/Motherfucka please/It’s my block or my rocks/Fuck that hiphop/Them one two’s/And you don’t stops/Me and my nigga Lance/Took Kim and Ceas’ advance/Bought 10 bricks, 4 pounds of weed plants’ (track #14 2:31-2:48). And you don’t stop.

Unfortunately, the rest of the album is filled with exactly what Biggie provided to the previous track. Tracey Lee is concerned with the finer things in life, such as money, fancy cars, nice clothes and plenty of women. Haven’t we heard albums before that deal with the exact same topics? Originality is definitely not one of Mr. Lee’s strong points.

However, he does possess some decent lyrical skills, backed with co-production from Bad Boy (what did you expect?). “On The Edge” describes the struggle that he’s had to go through just to get where he is. And even to where he’s already got to, there’s still bustas there waiting to knock him down. It’s a battle: ‘Yo/It ain’t no fun son/It’s real out there/Word to God it’s rough/Shit/Strugglin’ for bucks/Some stuck/Between a rock and some concrete/Yo I think some niggas/Wishin hard times upon me/But still I gotta keep keepin’ on/Cause I refuse to lose/Give up/Keepin on/I got my fam/Plus in God I trust’ (track #7 0:11-0:29). This track is anything but unpredictable, since the title might suggest this track comes a bit rough. But a mellowed out beat accompanies this track.

Most of the other tracks deal with the way he lives his life, and what he’s going to do with his money. Just look at some of these titles – “Big Will”, “Who’s Crew”, “Give It Up Baby”, and the very popular “The Theme (It’s Party Time)”. We’ve all heard these stories before. Amazingly, as more of these songs come out, the tales seem to get bigger and bigger.

If Tracey Lee had come out before the Bad Boy company started releasing its artists, he would have been the shit. But now it’s 1997, and our ears have been saturated with this type of music. Listen to Biggie’s Ready To Die, and there are some similarities; but no Mafia references. And now that Biggie’s dead, maybe it’ll be a wake-up call. Many Facez might just be the last of a dying trend.