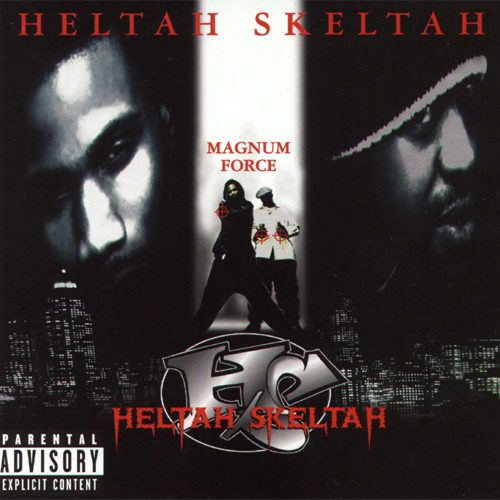 Thinking of this LP haunts me with a line that Rock chants in the reformed Black Moon’s new single “War Zone”:

“Either, run with us/or run into us”

There is no denying the Magnum Force of Heltah Skeltah’s triumphant return to the hip-hop world. After both shocking and rocking the underground by jacking A Tribe Called Quest’s “Hot Sex” and turning it into the rowdy anthem “I Ain’t Havin’ That”, Ruckus and Da Rockness Monstah return with their Bootcampian affiliates to stomp all over this album which almost seems SHORT at 19 tracks. Fortunately, an excellent bonus disc with the aforementioned “War Zone” in it’s entirety is also included; a giveaway easily superior to all of Def Jam’s “Survival of the Illest” discs combined together.

Be forewarned that this album is not for the faint of heart or the pacifist. Ruck and Rock like their tools, and aren’t afraid to pull them out when provoked. With this much raw attitude, we should be glad that most of their bullets end up being verbal. The dynamic duo manages to rise above the ranks though by having sly lyrics, smooth tracks, and a surprisingly R&B yet hardcore appeal on a couple of joints too — all while MOCKING the cliches of gangsta rap as on the cleverly funny three part skit “2 Keys”.

Fans of their Eskoshkan slang will quickly adapt to their new offering much as E-40 fans do when he spits game; one almost wishes that the Boot Camp and The Click would do a supergroup collabo’. On a slightly lesser scale, the group does attempt to bridge the gap between coasts on “Brownsville II Long Beach” with former Death Row affiliates Tha Dogg Pound. Despite a somewhat lethargic performance from Daz and Kurupt, the sparkling beat provides fuel while Rock’s bravado adds ignition:

“Buggin on this wack rap shit from coast to coast/Why not the real from both sides lick and go for broke? /No ass Joke, like Buck or Rakim, long arms like Down Syms/Snatch up your hoe, fuck her or pass it, it don’t mean na-thing”

Tracks like the Main Source inspired “Chicka Woo” and the smoothed out “Black Fonzirelliz” have a chance to bang on the crossover tip, but their hardest hardcore fans will not be mad at these tracks especially when head nodding to the mariachi flavored title track, the Method Man collabo’ “Gunz N Onez” and the epic nine minute “Gang’s All Here” featuring the entire Boot Camp Clik. Take the title of their latest single serious: Ruck and Rock ain’t no joke “like Buck or Rakim” as Rockness Monstah would say. These BCC kids is here to rep the MFC for the Ninety-Now.