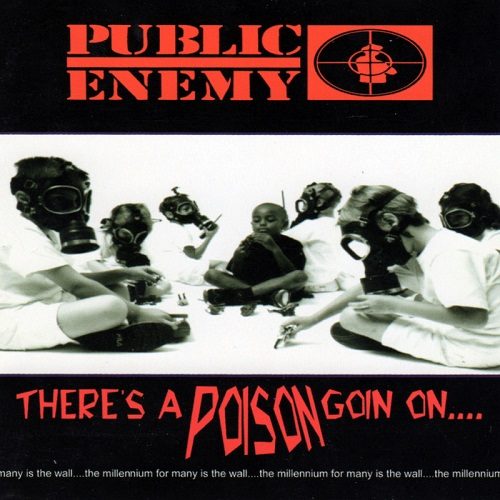 There's a POISON Goin' On

Do you remember when L.L. Cool J was “Bad”? When Ice-T had the “Power” and MC Lyte cut fools “Paper Thin”? Then you remember Public Enemy, one of the baddest groups that rap music has ever seen – and not bad meaning bad but bad meaning GOOD.

Public Enemy never really went away, but a lot of people went away from Public Enemy. Chuck D, one of hip-hop’s most political and militant rappers, seemed out of step with a 90’s rap culture obsessed with the finer things in life and the expensive champagne being pissed away at an accelerating rate; combined with what could either be considered musical missteps or beats that were too experimental for a public thirsting for simple loops of R&B and funk classics. Either way, the masses have fronted hard on P.E. despite a steady progression to a new and improved sound which started with “Muse Sick N Hour Mess Age” and continued on the Spike Lee soundtrack “He Got Game”. Since parting ways with Def Jam, Public Enemy has been able to strike out with it’s boldest album since “Apocalypse ’91” and the brand new “There’s a POISON Goin On” is the result – a culmination of years of struggle in the late 90’s which has obviously made them just as hungry as when they first stepped on the scene back in the 80’s.

Hearing a pissed off Chuck D is a pleasure unlike none other in rap — his righteous anger attacks a track like Serbians attack Albanians. “I don’t give a damn if you with me/stupidity, shit I’m the REVERSE of jiggy,” growls the master on “Here I Go” – a song which finds Chuck blasting today’s rappers because in his own word, “rap got pussy-whipped”. Ouch! Even more pleasantly nasty is the vicious “Swindler’s Lust”, in which Chuck D attacks the “Big Six” record labels as “vultures of culture” who pay “a dollar a rhyme but we barely get a dime”.

Of course, it would be easy to dismiss the messages – no matter HOW desperately needed in modern rap – if Chuck D and Flavor Flav weren’t flowing and the music wasn’t banging. Have no fear, this is that funky shit. “Do You Wanna Go Our Way???” is as banging as any Run-D.M.C. collabo’ with Aerosmith, “Crayola” is a musical colorbox of funk written all over the walls, and Flavor Flav’s solo (and self produced) “What What” is the funky musical and lyrical comic relief that hip-hop hasn’t seen since he Cold Lamped clear back in ’88 — so come on, let Flavor rip it up!

Is any of this album radio friendly? Probably not – but do you think they really give a fuck? They’re on an independent label, and they have nobody to answer to but themselves and the people who expect Public Enemy to bring the answer. What was the question? “Why is today’s hip-hop so UNINSPIRING?” Not anymore. No more forties, no more blunts, no more bitches and hoes. You will not bark like DMX, you will not get head like Noreaga, and no cries of WESSSSSSSSYDE will be heard throughout. All you get is simply the best that P.E. has to offer, and that’s a lot. Never afraid to tackle the issues, Chuck takes on pop culture, black genocide, and fraudulence in general; while Flavor Flav lightens it up just when it might get too serious to handle. As a result, it’s time to put away the NyQuil and STOP SLEEPING. Welcome to the Terrordome, 1999 style!