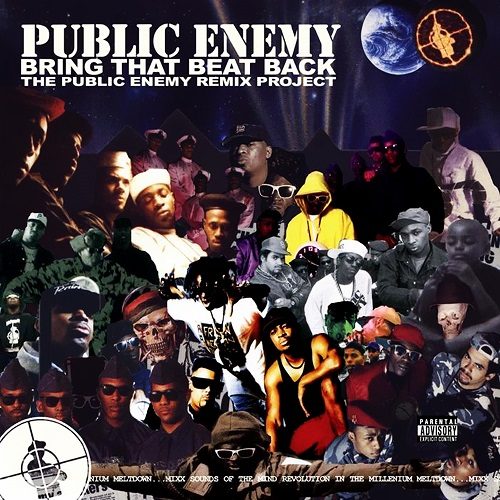 Remix projects tend to be more miss than hit. After all the only songs that tend to be worth remixing are those popular enough to be remembered and recognized. Those songs also tend to be the ones whose beats are as central to the song as the lyrics, therefore changing the music tends to do the song a disservice rather than improve it or present it in a new light. “Bring That Beat Back” doesn’t follow the usual trend of remix projects as most of the tracks featured here are not the most well known P.E. tracks. Due most likely to inability to clear the original P.E. catalog on Def Jam, most of the songs features on this album are taken from P.E.’s post 2000 albums on the Slam Jamz label. It’s a curse and a blessing as Hip-Hop fans would likely be more interested if tracks like “Don’t Believe The Hype” were being remixed, but the lack of super popular tracks makes the remix project more likely to be successful.

The bulk of the material on this album is taken from P.E.’s “New Whirl Odor” and “Revolverlution” albums. Depending on your stance on P.E. and their latest material, your interest in this project may end here. For those loyal fans who have continued to peep the crew in the new millennium there is plenty of material worth checking out. The “Bring That Beat Back” isn’t as funky as the original but definitely does justice to the track with its simple break beat approach. “Gotta Give The Peeps What They Need” is also a decent track as it laces the track with a mellow beat, deep bass line, and funky guitar loop. “Watch The Door” takes on a soulful approach with P.E.’s usual bass heavy production joined by a smooth vocal sample. But at this early point in the album it is apparent that despite all the beats being solid and sounding at home on a P.E. album, you don’t necessarily remember what the original beat was like and you have a suspicion it isn’t all that different from the remix.

That’s the problem with a remix project that remixes what in essence are all album cuts. Granted, a group like P.E. doesn’t really have “singles” in the conventional sense, but the tracks featured here are far from the group’s catchiest and most memorable. When you finally take the time to listen to the original songs to do a comparison the initial hunch is proven true as the overall vibe and sound of the remixes don’t stray too far from the originals. That doesn’t mean the remixes are bad, but they just aren’t that different from the originals. The remix to “MKLVFKWR” is one of the few tracks that clearly improves upon the original. “Do You Wanna Go Our Way” features the remix project’s best remix as 23 Skidoo lace the beat with a funky combination of samples that evoke memories of the best golden era tracks. The most prominent song remixed on the project is the Deelo 2G1 remix of “Public Enemy No. 1.” But a P.E. beat so funky that Diddy chose to remake it with very little change is impossible to improve upon.

Criticism aside, “Bring That Beat Back” is both ambitious and interesting. While the producers don’t stray far from the original in style and mood, their tracks are still very good and definitely worth peeping. The consistent vibe also helps the album because you don’t have to be familiar with the original tracks to appreciate, enjoy, and understand what P.E. is all about. With only ten tracks, the remix project may be a bit short, but the dope beats and dope lyrics contained inside make it worthwhile and prove that P.E. isn’t going anywhere for a long time to come.