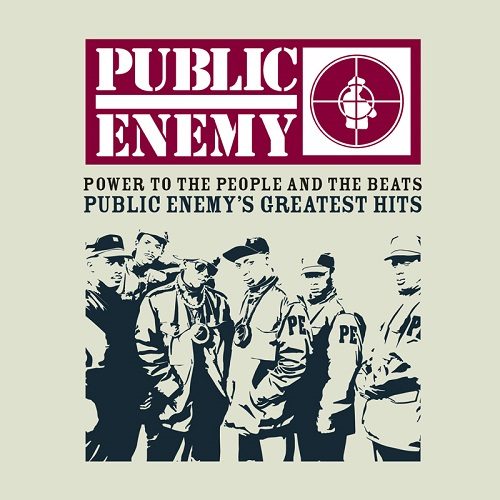 Public Enemy :: Power to the People and the Beats

If one has been a follower of hip-hop for over two decades, an album like “Power to the People and the Beats” can be a cause for mixed emotions. On the one hand a “Greatest Hits” album is in no way necessary, because in their heyday there was not a Public Enemy song or record that wasn’t great. You had the Bomb Squad making beats: Keith and Hank Shocklee, Eric ‘Vietnam’ Sadler and Carl Ryder. You had Flavor Flav, the clown prince of hip-hop and excessively large clocks, providing the humor and levity. You had Chuck D, the asiatic prophet of hip-hop, waking up the masses and simultaneously moving asses with finely tuned and thought provoking lyrics. For those of us who grew up with Public Enemy a “Greatest Hits” album is not only redundant but an ironic footnote for a group who once intentionally released a “Greatest Misses” EP which combined new music with remixes of P.E. songs that were already hip-hop classics.

On the other hand one must also recognize that having been around hip-hop for so long, many of the artists one grew up with are almost completely unknown to today’s new generation. Looking at an album like “Power to the People and the Beats,” which compresses the work of hip-hop’s most radical and revolutionary group into one slim volume, one can be left feeling like a dinosaur – in other words extinct. An album such as “Power to the People and the Beats” treats Public Enemy as though their songs were merely fossils to be unearthed and put on public display. At the time when Public Enemy invaded the national consciousness, putting their music on display would have been tantamount to an act of war. The opening words of “Bring the Noise” summed up the dilemma well: “too black, too strong.” While the beats were the kind of headnod hardcore hip-hop anybody could relate to then or now, America (well let’s be real – WHITE America) was not ready for a hip-hop artist who name-dropped Minister Farrakhan and proudly proclaimed “what’chu gonna do, rap is not afraid of you.” The truth is that Public Enemy thrived on that fear, because their righteous raps made their music the soundtrack of rebellious suburbanite teenagers and angry disenfranchised inner city youths alike. The ironic result was that P.E.’s militant pro-black message became a tool of racial unity and harmony, as kids of all creeds and backgrounds mingled together at their live concerts and in record stores whenever a new P.E. record dropped.

An album like “Power to the People and the Beats” is therefore a necessary evil. On the one hand it belittles the significance of a group that is not only profoundly important to the hip-hop generation but to the whole world. P.E.’s music and lyrics profoundly shaped and changed attitudes, erased ignorance, and taught a whole world to open their minds to entirely new possibilities and did so in the most subversive way possible simply by being DAMN GOOD MUSIC. On the other hand if some effort isn’t made to preserve and recognize the legacy Public Enemy has in both American music and Hip-Hop culture, an entire generation will miss out on the value that their records have and how they’ve shaped the world of today. This “Greatest Hits” album should in no way be taken as the final statement of the group. Public Enemy still continues to record new music to the present day, long after small-minded music critics have declared their careers dead and/or irrelevant numerous times. In fact one of the great strengths of “Power to the People and the Beats” is the inclusion of latter songs like “Hazy Shade of Criminal” and “Give it Up,” records even die-hard P.E. fans may have missed out on or overlooked. Unfortunately due to the falling out between Public Enemy and Def Jam none of the slamming songs from the newest P.E. records like “There’s a POISON Goin On..” and “Revolverlution” are included, which will only further perpetuate the myth that Public Enemy is finished and should only be considered in the past tense.

To say the selection of songs on this album is impeccable would be an understatement, but quite frankly when it comes to the Bomb Squad beats, Chuck D raps and Flavor Flav antics it would be really damn hard to go wrong in the first place. What one can say though is that the dispersement of songs is mostly effective: two tracks from “Yo! Bum Rush the Show,” five from “It Takes a Nation of Millions to Hold Us Back,” five from “Fear of a Black Planet” and three from “Apocalypse 91” among others. Even those who already own the vinyl, tapes or compact discs of Public Enemy’s hip-hop legacy will appreciate the selection, with the essentials from “Rebel Without a Pause” to “Welcome to the Terrordome” to “By the Time I Get to Arizona” all included for your listening pleasure. This is certainly not the closure of the book though, nor the last chapter to be written. There is plenty of more obscure P.E. material yet to be re-presented, including the Chuck D solo “Autobiography of Mistachuck” as well as B-Sides and remixes that are not included here; not to mention that until Chuck D says otherwise there’s always another new P.E. record on the horizon. With that in mind appreciate “Power to the People and the Beats” not as the last word, but as a great compilation OF the words of a group that when it IS all said and done will go down as great musicians, great scholars and great leaders of men.

Public Enemy :: Power to the People and the Beats
10Classic
Music10
Lyrics10