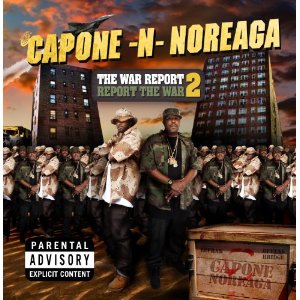 ” in 1997. The group changed record labels several times, splitting up in 2005 after Def Jam released Capone. Both Capone and Noreaga pursued solo careers, with Noreaga, aka N.O.R.E., moving his focus from hip-hop to reggaeton, until the Queensbridge duo joined forces again and released “Channel 10” in 2009. Now, a year later, Capone-N-Noreaga are back repping QB again with the sequel to their debut album.

It’s no surprise that Raekwon is the executive producer of “War Report 2: Report the War.” Less than a year ago, Raekwon released “Only Built 4 Cuban Linx… Pt. II,” combining the old-school grittiness that made the original Cuban Linx so successful with a slightly more polished, new-school sound. “War Report 2” follows the same path, and the result is a well-produced, surprisingly deep album that pays homage to the streets and to the lifestyle that Capone-N-Noreaga grew up with.

Capone-N-Noreaga may not roam the streets of Queens anymore, but they still rap with the same passion and intensity they had 13 years ago. It’s hard not to get chills as Noreaga spits the first lines of the opening track, “Pain:” “Waking up, cold in my eyes, two Phillies ready rolled on the dresser/My chick hatin’, I won’t stress her.” The contrast between the high-pitched, spaced out piano and the ominous sound of crashing symbols makes for a simple but effective beat, and Capone comes in second with arguably his best verse on the entire CD:

“Ayo it’s fucked up my nigga Black Box died on Christmas Eve
My other homie on his birthday
Now we on the block thinkin revenge, not hearin what his Earth say
Lookin at his seed make me want it in the worst way
Besides that my other nigga got cancer
and just found out that his wife is a dancer
So many questions all I need is an answer
I done did so much dirt ain’t no room in the hamper, check it
I got scars on top of scars, William Wallace renegade
Most of you niggaz sweeter than lemonade
We bloody up your garments, nigga this is phonics
I ain’t speakin in ebonics take my words as a promise
Get Obama on the line tell him raise the threat level
We the last real niggaz standin when the dust settle
When it’s war done, the beef never stops
It comes right back around like the hands on a watch
Army fatigue, fox, 40 below Timbs
501 Denims, coca sales with no lens
Just to see the snakes clear cause I ain’t got no friends
Only my brother from another mother we goes in
My gun’ the alarm, bullets fatter than Big Mama
To deal wit’ the pain I smoke scamah
I feel pain”

It doesn’t take more than a quick listen through of the album to figure out that Capone-N-Noreaga don’t have a whole lot to talk about outside of repping their hometown and growing up in the hood. Luckily “War Report 2” features 14 different producers, as well as guest appearances from Raekwon, The LOX, Nas, and Busta Rhymes, to ensure that things never get monotonous. “Dutch Masters vs. Phillies vs. Bamboo” — produced by Scram Jones, the only producer to appear more than once on the album — is eerily reminiscent of a RZA beat, with a deep bass and a high-pitched, sped up soul sample. “Thug Planet” also has an old-school feel to it, with a set of heavy, pronounced drums and an electric piano that sounds strangely like the piano from Mobb Deep’s “Shook Ones, Pt. II.” On the other hand, the album’s first single, “Hood Pride,” has a much more upbeat, synthy piano, as well as a catchy chorus from Faith Evans:

When it all boils down, the gritty, hardcore feel of “The War Report 2” is a breath of fresh air, albeit a minor one, to a hip-hop scene that is sorely lacking any old-school influence. Perhaps the album can best be summed up by a line from “The Reserves,” featuring Raekwon: “It ain’t where you at but where you come from.” 13 years after their debut, Capone-N-Noreaga continue to rep Queensbridge to the fullest and continue to stay true to the hardcore style that first brought them in the game.