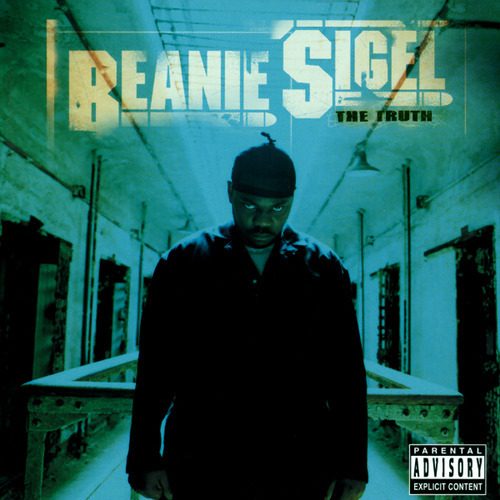 One is left wondering what ‘The False’ or ‘The Lie’ is now..

You know how Mac come through on the club tip; and admittedly, that thug shit worked on Jay-Z. It even worked for The Roots when he added some “Adrenaline” to their album quite successfully. Something doesn’t quite add up here though. If you had to pick a Roc-a-Fella artist to listen to other than Jay-Z, Beans would probably be el candidate numero uno. The problem is he’s running in the same race WITH Jay-Z. Trying to run with Jay for the popular vote would doom any candidate to get beat by a 2 to 1 margin. The best thing one can say about Beanie is that it’s not near as embarassing as the 5 to 1 margin over Memphis Bleek or the 10 to 1 margin over Amil(lion).

As an album of ‘The Truth’ it’s only fair to be equally honest in the assessment of this albums strengths and faults – the irony is that both of them revolve mostly around Beanie’s voice. Beans Mac is that kind of rapper who sounds good in 30 second to minute twenty long soundbites but whose voice eventually becomes monotonous. Not irritating, not wack, just mundane. This isn’t really helped by his tendency to spit raps that end with the same rhyme every time. It’s not even A-B-A-B for the Beans man – it’s just A-A-A-A all the way. It’s attention getting as a cameo but it’s a gimmick that tires quickly at length. “Raw N Uncut” with Jay-Z is an ideal example. “I’m tellin you dog, I’m the wrong one to fuck with at ALL/ I’m the type that’ll set it broad day in the MALL/whether glocks or body shots, we takin no FALL/fuck you cops, SWATs, feds and ALL.” It’s problematic enough that he rhymes all WITH all let alone the fact it’s extremely boring to listen to. The song has a hot beat and a guest appearance by ‘Hovah, which are it’s only saving graces.

Beans lives by the beat and dies by the beat. Even though “Mac Man” was cute conceptually with the video game samples it doesn’t work well other than as a gimmick rap – it has no head nod appeal. On the other hand the very short “Stop, Chill” could bump heads from the L.A. to the Dirty South and actually showcases Beans changing up his flow a +little+ bit rhyme wise. “Brad and Mac” falls somewhere in between the two – Scarface is a dope rapper and the beat is okay but like his duet with Guru on “Betrayal” last year it just sounds confused and misguided. 9 out of 10 duet raps between Southern MC’s and New York MC’s just don’t work.

I think it’s fairly evident that ‘The Truth’ about this album is that a lot of people are going to confess having bought it for the bonus Jay-Z song “Anything” which was cut from the American release of “Volume 3”. Call the Oliver Twist sample cornball if you like but the simple truth is this sequel to “Hard Knock Life” is hotter than anything Beanie spit solo; and contrived “feel good” songs like his “Remember Them Days” duet with Eve just don’t make the difference. That’s not to say that songs like “What a Thug About” and “Die” don’t have some bump factor, but as Philly rappers go Beanie has neither the lyrical acuity of Black Thought nor the charm and charisma of Will Smith. Beanie constantly brags that he got his record deal by accident and that he really made his living as a hustler. Maybe it’s not too late for him to go back.