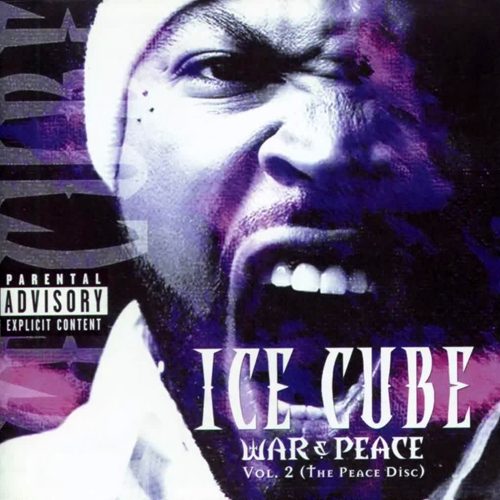 As a reviewer I would like to point out from the start that conceptually the idea of a “War” and a “Peace” album was flawed from the start. Neither album Ice Cube has released in the last two years really fits the bill. Volume 1’s “Greed” and “Pushin’ Weight” had more to do with hustling than “War”; likewise Volume 2’s “Hello” and “The Gutter Shit” have more to do with gunplay and shit-talking than “Peace”.

Now if we can discard this obviously ill-conceived dichotomy and move forward; it’s possible to evaluate this new Ice Cube album strictly on the merits of it’s content regardless of the packaging. This album certainly succeeds in a lot of areas where the previous disc failed. Volume 2’s lead single “Until We Rich” actually harkens to the days when Ice Cube dropped hardcore “Predator” style albums and still managed to hit radio with “Today Was a Good Day” – a commercially viable song that wouldn’t offend his hardcore fanbase.

Elsewhere Cube drops a smattering of songs that are slightly more hit than his last outing’s misses. “You Ain’t Gotta Lie (Ta Kick It)” features a trophy cameo by Chris Rock but definitely pulses with the energy that made “We Be Clubbin'” a suprise hit. “Supreme Hustle” is more of Cube’s Y2K ‘Don Mega’ persona but his mackin herein could be considered a direct descendant of his N.W.A days. “24 Mo’ Hours” is a survival story gritty enough to make one believe O’Shea gave up the glamour of Hollywood; and “Gotta Be Insanity” could win on sheer funkorama, lyrics aside.

Lyrics do still remain an issue though for Ice Cube. If Volume 1 didn’t convince fans that Cube’s militantly political days were over, Volume 2 should be the icing on the cake. On the aforementioned “Gotta Be Insanity” Cube’s favorite topics are “haterism” and how he “might catch a hot one” from envious PhDers while bragging that his money is “all legit”. Now what are we to make of the blatant materialism and sexual gratification of songs such as this and the previously released “You Can Do It”? No more or less than the “Bling Bling” of Cash Money or the Bentley of Puff Daddy it seems. Therefore I won’t join the long list of people drinking Haterade; because it’s ultimately Cube’s choice to rhyme about what he wants. So if you’re looking for politics and upliftment, you best step to Dead Prez – Cube’s trying to be the rap Donald Trump, and he’s really not that bad at it either. The one (somewhat strange) exception is the year 2000 update of EPMD’s “Please Listen To My Demo” on “Record Company Pimpin'” – and no lie it’s a fat track. Just out of character for the Mega Don.

The bottom line? You really should know what to expect from Ice Cube by now. He’s large and in charge and like The Rock he expects you to know your role and shut up unless spoken to. Can you dig it jabroni? Cube still has a commanding voice and a good flow, and those do count. He may not be “Straight Outta Compton” anymore but the irony is that his style is more 1988 these days than 1994 or 1998. Take that as you will.