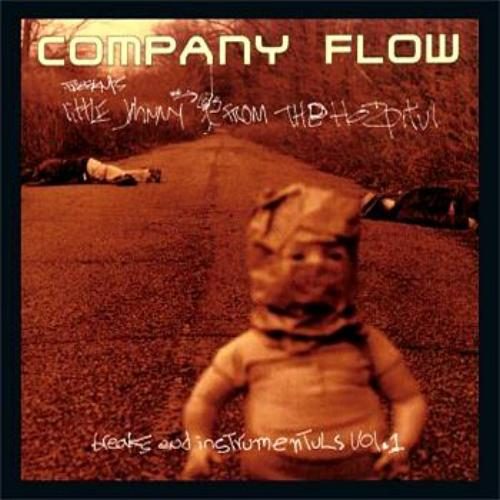 Love ’em or hate ’em, no one can deny that Company Flow is on some different shit. While at times they do stick to fairly formulaic hip-hop (and I don’t mean that pejoratively), tracks like “Weight”, “Collude/Intrude”, and “The Fire In Which You Burn” show that CF as a creative production unit is one to be reckoned with. Like the Bomb Squad before them, producers El-P and Mr. Len are pushing hip-hop in new directions with little consideration for previous conventions and understandings of what hip-hop is (or was). While their first hit, Funcrusher Plus, had hints of their limitless creativity and unique production style, their follow-up, an all-instrumental album titled Little Johnny from the Hospital, hits the listener over the head with some of the strangest production work put down on wax.

Believe me, folks, this aint your father’s hip-hop. In fact, I’d like to propose that if a hip-hop sci-fi film is ever made, CF are lined up to do the score. On top of all manners of trippy beats and phat bass lines, El-P and Len throw down enough oddball sounds and effects to fade an R2 unit. Consider the tracks “#9” and “Gigapet Epiphany”, featuring an odd whistle sound and other out-of-this-world snippets of noise that brings to mind the aliens in Tim Burton’s Mars Attacks. Another winner is “Happy Happy Joy Kill”, featuring what sounds like a 9 yr. old banging on a guitar, people screaming and moaning, and, for lack of a more sophisticated way to describe it, something that sounds like a top being wound up. I have no idea where Len and El-P get this stuff, but they put it all together like no one else.

Being an instrumental album, and a strange one at that, this isn’t for everyone. It isn’t exactly made for bumping out your trunk. Nor is it gonna get the honeys dancing at your local club. If you liked the stranger elements of Funcrusher Plus, check it out; the album was probably made for you. Others may find El-P and Len a few tracks short of a 16-track. To each his own, but you gotta respect this for its originality if nothing else. With this album, CF continue to demonstrate that they are on the cutting edge of hip-hop.