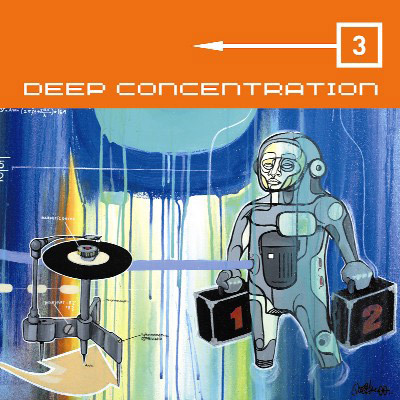 “From every angle.. and by every means.. the earthling is being conditioned.
What is he learning? What is his ultimate purpose?”
–> Ming + FS “The Human Condition”

A great orator once told a companion of his, “Yo, Terminator. Let ’em know you speak with your hands.” And Mr. Terminator went forth into the land and held many conversations with many ears. Telling tall tales about his times with the great orator Chuck D.

Now, I can continue with the deep thoughts and whatnotâ€¦ Or, I could shut up and tell you about Deep Concentration 3. I must say that if you haven’t picked up any of the three installments as of yet you need to cut your ears off and put ’em in a mason jar! Because you are obliviously saving them for something “far greater” that we normal humans can imagine. With OM’s third installment of the series they packed the house with yesterday’s, today’s and tomorrow’s leaders in turntable trickery. One artist even decided to handicap himself by doing a routine with only one turntable. Laying track upon track upon track, creating a collage of Antimatter. (DJ) Radar even had the nerve to do it backwards!

The novice out there may not be too impressed with the exercises displayed on DC3 by either the featured DJ or MC. Could be because none of these tracks will ever grace the main slot on one of those boring ass video shows or because the subject matter is more than intelligible. To those persons I have a rather large, funky, petrified sample of defecation for them to enjoy. Let’s look at what DJ Revolution does with “Hard Rock.” An educational yet disturbing piece at the same time. Just when you thought you’ve heard a great call and response routine, you get introduced to a vicious curve ball that sends you back to the drawing board – Reverend Run and Erick Sermon featured in yet another classic for the ages. The back and fort with their voices is delicious. Make no mistake with this one kiddies; the revolution is being televised!

The MC’s called upon for this release reflect a new generation of skills that you should come to enjoy for more than a Hip-Hop minute. The Blak Forest collective resurfaces to give you the verbal blessings from LMNO, 3rd Degree, wiz.onder, and DJ Rhettmatic on the 1 and 2s. In the tradition of letting you know exactly what state of mind the MC just happens to be in (in this case Fresno), Planet Asia gives you a gritty tale of surviving the mean city streets from day to day on “Fresno State of Mind.” The aspects that he has working for him in this song are the Nas hook and the funky piano riff that is carried throughout the song.

A definite head bobber placed between the turntable madness of Plagaiwrists and (DJ) Infamous. There are a lot of nice elements about DC3. One of them being the representation of the “junkyard” sound provided by Ming + FS and Highlanders. For me the truly standout track would have to be Cash Money’s “3:00 In Da Morning/Circus of Hell.” A certified braggadocio jam here. Just about every scratch technique to tease your ears in the past 10 years was featured in this joint. You definitely get smacked with the catalog of hits from Cash Money. He even made Prodigy of Mobb Deep sound good so take note: the old dog knows all the new tricks!

Not only does Deep Concentration 3 send you back to the lab to get ya skills together. You are forced to rethink your whole approach altogether. Where most compilations fall well short of earning any sort of rotation in your new overpriced digital toy, DC3 will have you passing levels unknown.