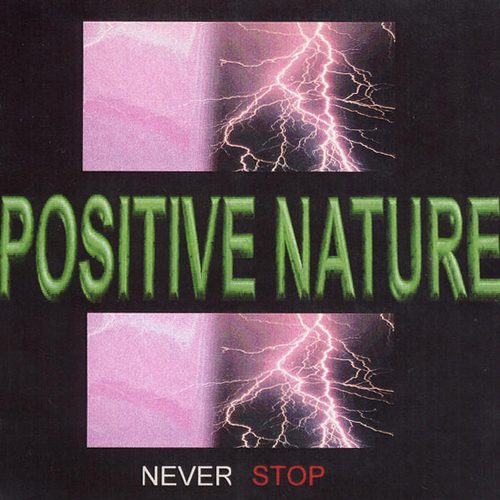 Sheldon “S.D.T.” Taylor a.k.a. Positive Nature is a one man work-a-holic. On his Never Stop EP he produced and recorded the whole joint as well as rapping on it. Now THAT is what you call hustling on a come-up.

Positive is nothing like K – he’s got more in common with RBX. “Serious like a disease, a VI-RUS, penetrates your I-RIS, retina flow,” raps Pos on “Release (Remix)”; giving up the ghost of “High Powered” from Dr. Dre’s original “The Chronic”. Lest you think he’s a biter, Positive has his own style which shines over time, but the RBX similarity is definitely not detrimental to getting his shine on.

Where Positive turns negative is the fact that his music can’t really hold up the weight of his flows and the rhymes get repetitive. The “Positive Nature (Remix)” sounds a little weak and is thrown off by an unnamed guest sounding like Spice 1. The styles don’t mesh and neither does the beat. The Mental Mix of “Blaze” may have the album’s best bass but the track best illustrates Positive Nature’s lyrical weakness – a rather annoying tendency to keep rapping “ways”, “blaze”, “days” and “amazed” over and words with the hard “A” sound – to the point where even hearing the name “NAY-chure” may get on your nerves.

Even though this EP started out fairly strong, it falls apart on uninteresting tracks like “What You Gonna Do Now?” and an R&B remix of “Release” whose bassline sounds straight lifted from EPMD’s “You’re a Customer” – I actually started humming “Time keeps on slipping..” as I listened to it. Now on the “Positive” tip dude does have a nice flow and vocal tone, but he needs somebody else to provide the beats and he’s got to watch it with those “craze and amaze while I blaze in a daze” lyrical ways. It’s a good start, so hopefully Nature keeps it Positive and continues to improve as a rapper.