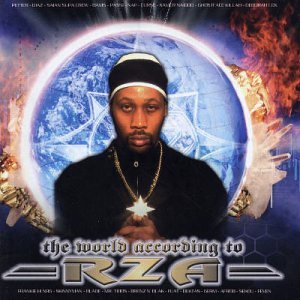 RZA :: The World According to RZA

For the better part of the nineties, the Wu-Tang Clan was one of the globally most visible messengers of hip-hop music. All around the world you could hear kids chant “M.E.T.H.O.D. – Man” and if you ran into someone rocking the standard hip-hop attire, it was very likely that his hoodie bore the famous Wu logo. With the possible exception of Gang Starr, no other hip-hop act has received that much props worldwide. Individually, not every member of the Clan was able to build up the same high profile, but everyone who dealt with the Wu as a whole came to realize that the RZA was a crucial figure in the success and longevity of the group. Not only was he the musical mastermind behind the Wu’s unique sound, he also took care of the business side, running Wu-Tang Records and Razor Sharp Records, setting up other business ventures, and last but not least he also fulfilled the role of the Abbot, ensuring the loyalty of its highly individualistic members to the Clan.

For all the hard work, it seemed that RZA found himself in need of an opportunity to vent off. His Bobby Digital persona allowed him to step out of his scholarly character and explore his worldly desires for two entire albums. The first of which laced the secret agent/cyborg concept with an international touch, with various interludes in different languages. Now prepare to hear another RZA-produced record with even more foreign languages. After years in the making, RZA finally presents his ‘international album’. An ambitious project indeed, considering the Abbot’s busy schedule and the ground he’d have to cover. RZA thus made a wise decision and invited EUROPEAN guests only. So don’t be fooled by its title, “The World According to RZA” (originally “WAR: “The World According to RZA”) may contain different languages, its rappers are all located in Europe. It would be unfair to accuse the man of playing with names, after all the title says it all, this is “The World According to RZA” and we’d better accept it.

There are other things we have to accept. For instance, “The World According to RZA” does not feature any international Wu-Tang affiliates. No sign of the Dutch MC Cilvaringz or the UK’s Fredi Kruga, both signed to Wu-Tang International. Instead, RZA enlists established rappers that are sure to ring a bell with European consumers. Making five stops, RZA sets foot on Scandinavia, France, Germany, the UK and Italy. The outcome is as multi-facetted as European hip-hop itself. In Norway and Sweden, he hooks up with two rhyme sayers (Diaz and Feven) that defy the trend and rap in English. In Germany, he makes sure to work with superstar Xavier Naidoo, the first singer to successfully do soul music in German, but he doesn’t forget Germany’s important Turkish hip-hop scene and seeks out the talents of Fuat and Bektas. Neither does he ignore the strong flow of Curse or the ‘Afro-German’ identity of Afrob and Sekou. In France, he pays tribute to the country’s leading role in European hip-hop by working with two of its finest acts, IAM and SaÃ¯an Supa Crew.

This all sounds great and as a fellow European rap fan I can’t stress enough how delighted I was to hold this record in my hands. One of the most visionary hip-hop producers ever hereby acknowledges that yes, there is hip-hop in Europe, and that European rappers are capable of flowing over RZA beats. That means a lot, even in 2003. However, as someone who has been following European hip-hop for over a decade, I feel I have the obligation to put this record in a proper perspective and look past the benevolent gesture.

Let’s look at the music first. Having redeemed himself from previous creative slumps on more recent releases, RZA turns in a batch of solid beats, all of which are more focused than his Bobby Digital adventures. “Mesmerize” is a good openener consisting of stretching keyboard melodies, a fuzzy bass, bottom-heavy beats and an additional layer of bass wrapping the track up. “Det E SÃ¥ Jag KÃ¤nner” booms with the confidence of mid-90s New York rap (and is strongly reminiscent of Fat Joe’s “Firewater” featuring Raekwon). “On tha Ground” meets the contemporary melancholic soul sample standard. “SaÃ¯an” is an upbeat, horn-driven groove that probably best illustrates the specific European/African streaks of a group like the SaÃ¯an Supa Crew. The same goes for the shuffling “Please, Tends L’Oreille” by female French rapper Bams, whose melodic flow definitely has traits of a classic chanteuse. “Seul Face A Lui”, on the other hand, sounds (maybe too much) like a type of beat IAM would come up with themselves.

Elsewhere, the album walks on more shaky grounds. “Ich Weiss (On My Mind)” only differs mildly from the 2001 Wu-Tang track “Iron Flag”, an indication of how old some of this material is. Still, its more rhythmic backbone offers a solid bed for Curse’s harsh flow. “The North Sea” is introduced by a funny interlude featuring RZA hunting Norwegian whales but the track itself is too murky, not in a “Enter the Wu-Tang (36 Chambers)” way, more in a third-row Wu affiliate way. French rapper Passi has two solo albums full of beats better than “Dedicace”, “Black Star Line-Up” pairs a familiar Tchaikovsky sample with an ill-matched drumtrack, “Passaporto Per Resistere” leaves it all up to veteran Frankie Hi NRG and the charm of the Italian language to make the barebone track sound interesting. By far the ugliest track is the UK radio session “Boing, Boing”. Yes, it feels like one of those random beats you would hear during a freestyle session, and Tim Westwood, Skinnyman, Blade, Mr. Tibbs and the RZA himself carry that sentiment into their performances, but the result is still utter bollocks and a complete waste of UK talent, especially considering Bronz n’ Blak’s shameless Yankee-jocking in “Make Money, Money”.

The biggest surprise on “The World According to RZA” comes in the form of the two Xavier Naidoo contributions. “Souls on Fire” is a romantic back and forth with Deborah Cox over a velvety track, while “Ich Kenne Nichts (Das So SchÃ¶n Ist Wie Du)” alters from just some vocal harmonizing, guitar plucks, piano drops and a barely noticeable beat into a soulful suite carried by Naidoo delicately expressing his emotions in English and German. You’ve never seen RZA’s name on something like this.

To wrap this up, you might take offense in certain aspects of this record, you might lament the small amount of RZA verses or Wu-Tang cameos (Ghost and U-God do show up), you might wonder why most rappers here fail to seize the historic opportunity and drop some historic rhymes, why almost everyone does what they always do, why some artists that have been announced to appear (Assassin, NAP, Articolo 31, Dido) are nowhere to be found, why your country or language has been left out, why there are no cross-continental collabos, but ultimately you can’t deny that RZA put together a fairly well balanced album (as I’m told, it differs slightly from region to region, I seem to have reviewed the German version) with a welcome nod to some of Europe’s veteran figures (Tim Westwood, Blade, IAM, Passi, Feven, Frankie Hi NRG).

Last but not least, let’s not forget that nobody has yet succeeded with what RZA achieves as an outsider: to unite so many European hip-hop heads on one album! Even if you can’t disregard whatever bothers you about this album, you should be able to cherish that thought – as well as jewels such as the festive “SaÃ¯an” (with Ghost and RZA joining in the fun) or IAM’s spiritual “Seul Face A Lui” (again with RZA). For American listeners (who so far have to get this through import), “The World According to RZA” doesn’t explain what European hip-hop is (even though it leaves a few hints), but you can rest assured that it’s bound to become one of its milestones.