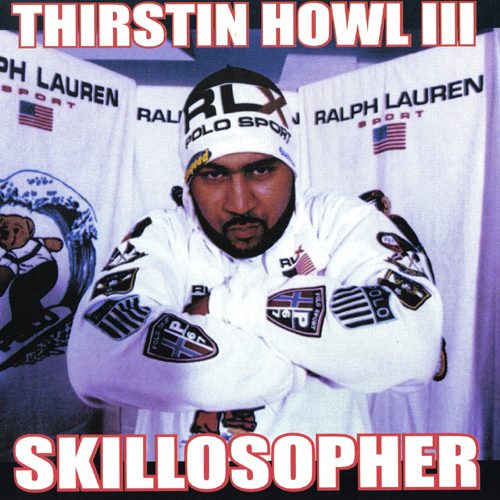 Shameless spitacular stylistic slurred shittalking speech. Style? Strange. Thirstin Howl III represents a kind of MC to whom “flowing” is probably not a first priority. Sticking to the script? Screw that.

Thirstin’s career probably would not exist without a burgeoning indie rap scene and a well-received guest appearance on the Rawkus “Soundbombing 2” compilation. This isn’t entirely a bad thing. Thirstin Howl as a rapper depends entirely on his punchlines; and many of them are drop-dead funny. He occasionally misses the mark by a mile with lines like “Don’t call me ‘Dunn’, ’til I’m finished” on “The Polo Rican” but makes up for it by making hilariously un-PC statements like “Every broad got a hoe of her own; share the wealth – bring the bitch home!” on “I Wanna Watch.” In fact, the latter is Thirstin’s ode to how his homegirl eats pussy BETTER than he does. Not since Big Punisher has ANY rapper (Latino or otherwise) been so up front about the pleasures of oral sex.

The flipside of the equation is that Thirstin’s style can quickly get tiresome. If he was rapping to Skrew music, his obnoxiously slow flow might be perfect – but over hardcore New York beats by the likes of Willtell and PF Cuttin, it seems almost off-tempo. That’s not the biggest downside to this CD. This self-manufactured and distributed release serves as a showcase for Thirstin’s talents, but also for the good reasons to be signed to a record label. Production quality is ALL over the map. Even songs like “Russian Roulette” that have a cameo from Brooklyn Academy (including Pumpkinhead) and a slamming beat suffer. Within the first thirty seconds of the song you will hear a “skip” that indicates the song was not laid cleanly onto tape. From one song to the next the volume level changes enough that you’ll be constantly adjusting your stereo or headset volume.

To be entirely fair, Thirstin Howl’s album is fun to listen to. Amusing songs like “Stole” (which in part reinterprets Black Rob’s “Whoa”), “How Many Babbee Mova’s” and the Eminem duet track “Watch Deez” are still worth the price of admission. Thirstin Howl’s style, for better or worse, is best served in small doses. Even on a well-produced, well-mastered album, this basic truth would not change. Regardless this album is still held back more by shitty production than shitty rapping. Thirstin needs a professionally produced six track EP that equals the quality of his “Brooklyn Hard Rock” track from “Soundbombing 2” to really turn heads. Until then, self-released albums such as this one are strictly for his die-hard fans.