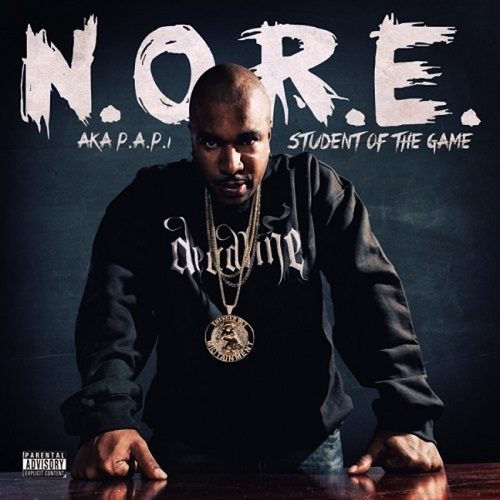 Call him Noreaga, N.O.R.E. or even P.A.P.I. – but at this point you have to call Victor Santiago a legend too. Besides his membership in Queens, New York rap super team Capone-N-Noreaga (CNN), he’s become a superstar in his own right as a soloist, with one of the most easily recognizable voices in all of hip-hop. It may not have been his intention to blow on his own, but Capone was in and out of prison so much he had to go “Superthug” just to keep his career going. He’s always walked the line between being locked up and being a star himself, something he addresses with a firsthand narrative on the Cookin’ Soul produced title track:

“I went to school with a weapon, not for protection
Just to show it off, but I won’t really use it
The power of the gun it gave me strength I would abuse it
I never ever ever thought I’d make it out in music
Started writing rhymes harder than division in youth
Locked up, reading Donald Goines books
Expanded my imagination…
Rap, probably saved my life twice”

At times through the years I’ve been critical of Noreaga for putting his charisma above the quality of his rhymes. It’s not surprising he would do so given he was blessed with an abundance of it from birth, so much so that if he could bottle it and sell it, a whole lot of rappers with D+ personalities and monotone deliveries could pay for five figures for a jar and drink up to get dope (a better idea than sizzurp). Something’s changed over the years though. Either N.O.R.E. has matured dramatically as an artist after almost 20 years of making records, or so many medocre emcees are making chart-topping singles that Santiago suddenly seems like a lyrical genius by comparison. I’ve got to think it’s a little of both. He’s not going to be mistaken for Posdnuos in terms of complexity or Chino XL in terms of punchlines, but a serious P.A.P.I. doesn’t sound out of place with Raekwon and Busta Rhymes on “Faces of Death” or Mayday and Tech N9ne on “Dreaming.” In fact the biggest problem with the single “Tadow” is that Pusha T is the only guy on his level – 2 Chainz and French Montana drag the song down.

The biggest surprise of “Student of the Game” was Noreaga linking up with Large Professor. On one hand as Queens natives this is the kind of thing that could have been done years ago, but they seemed to run in different circles musically, and Large Pro has always been selective about his clientele – even Nas and Pharoahe Monch have had to wait and only get a beat here and there. “Built Pyramids” has him acknowledging this right from the intro, saying “This my first Large Pro beat! You a genius, I’m honored!” In some respects it’s a typical N.O.R.E. track lyrically (he rhymes “attention” with “attention” – a trademark stylistic sin) but it feels extra (P) special over this beat:

“Since +Lookin At The Front Door+ I always want more
So I got drugs and pumped more
This is probably, my philosophy
Geography, ecology, biology, psychology
I use to spit Glilette razors
Hand to hand with my pakistan man we made papers
Fish scale from Jackson Heights columbians
I.S. 61 was raised with no republicans
And I don’t mean to get all political
But Mitt Romney don’t plan to do shit for you”

Now while I’m handing out props to Noreaga for stepping up and sounding like he has in fact been studying in the lab to create better songs, there are a lot of inconsistencies this “Student” can’t overcome. Every other song is a new beat maestro, so even when N.O.R.E. finds his groove working with one, that’s already gone on the next song. Some of the failures are shocking – the Pete Rock produced “Vitamins” is completely flat musically and lyrically. Illa and Inf, who did so good on “Tadow,” offer such generic R&B quiet storm pablum on “She Tried” that the references to his hilariously inappropriate “head in the whip without crashin’ it” sentiments don’t connect – and Lil Wayne’s guest appearance feels forced and unnecessary. Charli Brown Beatz work on “Only Bad Ones” featuring Jeremih is everything the Tunechi song isn’t – it feels cutting edge, fresh and like something that would bump on radio or in the club right now. Pharrell’s “The Problem” is on that razor too, but the electronics may be too much for some ears – for this reviewer though it works.

It’s the wild variances between songs that make “Student of the Game” both a fascinating and frustrating album. That’s the biggest problem with this album really – too many highs and lows – and too many guest stars may also hurt things a bit. It’s not like N.O.R.E. hasn’t earned the right to call in the all-stars and get cameos by Scarface, Swizz Beatz and Tragedy, but there are so few solo songs like “Fowl Niggaz” that they really stick out (unfortunately that’s not one of the album’s better tracks). Part of the continuing education in the hip-hop institutions of higher learing needs to be that when you’ve been around as long as Victor Santiago, you don’t need to share the spotlight so much. I like the new and improved P.A.P.I. of 2013, I just want him to own his stature like a true baller and cut back on the number of guest producers and emcees so he can REALLY shine.