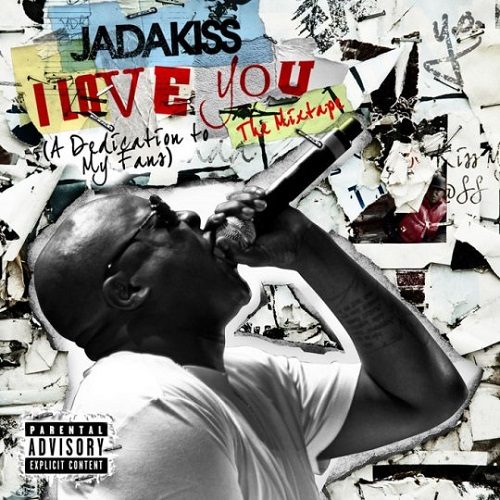 “I’m still here, and I owe it all to you – my fans
So to show my gratitude, and appreciation
I just wanted to let you know”

It’s good to know Jadakiss appreciates his fans. Making a dollar is hard in the music business, now more so than ever, so it’s truly generous for Jada to give back to his fans with a free mixta… what? HE LOVES THE FANS SO MUCH HE’LL MAKE THEM PAY TO HEAR HIM SAY THANK YOU? If you think about it though, the intro to “I Love You (A Dedication to My Fans)” does make sense given he’s already got your $8-$10 for the purchase. Now one could argue that a true “thank you” would have been to put it out for free on the internet to the masses, but at least the dedicated ‘Kiss fan can know their loyalty is appreciated right from the jump. It takes both dedication and loyalty to plunk down real money for any rapper’s mixtape with even the most popular rap artists giving away free digital albums almost every week of the year.

Beyond your willingness to shell out $8-$10 for Jadakiss as a fan though, you’ve also got to be willing to accept that you only get 10 songs for your purchase (the aforementioned “Intro” track really doesn’t count) and that none of these songs feature original beats. One obvious reason so many mixtapes are free, besides the fact rap artists bend over backward to give out freebies, is that the songs mix vocals with completely unlicensed instrumentals. To go legit you’d have to get clearance for every commercially popular song you blessed with your own rap, and the mixtapes that feature original or obscure beats are the exception to the rule. Jada though is in the enviable position of being tied to Ruff Ryders and Def Jam, which means a large pool of corporate dollars to tap into. They can afford the high cost of clearing each beat to the rhyme that ‘Kiss already made, and by selling the shit they recoup AND get paid. Therefore there’s no need to give away “Lil Bruh” for free, even if it blatantly samples from N*E*R*D:

“At times I know life can seem miserable
But lil’ bruh you gotta lotta more living to do
You gotta go get, cause they ain’t gon’ give it to you
Just watch what you say and watch who you deliver it to
Put somethin away, cause you’ll never know when it rains
And you can never feel the love without knowin the pain
The bracelet and the pinky ring go with the chain
These the different kind of jewels though that go in your brain”

Jada’s performance on “Lil Bruh” is an acceptable performance by the D-Block rapper. He’s being heartfelt and sincere and trying to speak to today’s youth, but walks a fine line between being ernest and cornball. It’s always been a tough balance for ‘Kiss given that his delivery is a bit close to monotone, so he relies on punchlines and the finale of his bars and verses to make an impact with fans. It’s tempting to say he’s a bit like the late great Guru in that regard, but Guru rates higher on his ability to interweave complex bars together and not rely solely on bars ending the same way. What they do have in common is that even if they spit something that’s pure corn, it can end up being saved by the delivery and the odd appeal of the vocal tone. Jada’s scratchy vocals make songs like “In the Streets” work even while rapping over Alexander O’Neal:

“Yeah, yo, I’m on the block faithfully
Got it so good if I’m late they’ll wait for me – momma please pray for me
The devil does things in the worst ways
In the E.R. waiting to hear what the nurse say
I done paid for more funerals than birthdays
Could finish a whole one and a half by Thursday
So just imagine what I’m sittin with
And I ain’t splittin it, I’m out here gettin it”

There are a couple of original tracks worked in between the expensive samples on Jada’s new release, such as “Hold You Down” featuring Emmany, with the irony being that Emmany certainly got paid for the cameo so it probably cost just as much. J Butta and Poobs do a good job producing and recording it though and ‘Kiss lays vocals that won’t be anathema to his devoted fans:

“Lot of square feet shoppin sprees is the minimal
Talk all subliminal in love with a criminal
It’s all comin back to the pot no chemicals
She can get hired on the spot no interviews
(WOO!) No carbs just vitamins, minerals
Ridin shotgun in the Coupe with the general
Yo go hard for the kid so I’m into you (yeah)
Hold you down, that’s what I’m fittin to do”

It would be fitting to say that Jada gives 110% effort on “I Love You (A Dedication to My Fans)” so that they know he truly does respect them and appreciate their investment in his work. Yes – it would be fitting – but that shoe doesn’t fit. These aren’t bad songs, and this isn’t a bad mixtape, but it doesn’t come across as Jada’s most potent raps, powerful punchlines, or that he went to exceptional lengths to be lyrically creative. He’s not quite phoning it in, but he’s not got a fire lit under him either. Jada sounds comfortable, and after a long career with many ups and downs, he’s more than entitled to not be starving. In the mixtape world though, it’s the starving artists who shine the brightest. Those who have nothing to lose make a name for themselves by ripping the hottest beats alive with the fiercest lyrics, totally bootleg, just hoping to get noticed and turn that underground fame into real money. Jada keeps rapping because he’s good at it and has so many fans already, but if he was starting from scratch here it would be tough to catch on. “I Love You” is aight but leaves you feeling it could have been much more.

Jadakiss :: I Love You (A Dedication to My Fans) The Mixtape
6.5Overall Score
Music7
Lyrics6.5