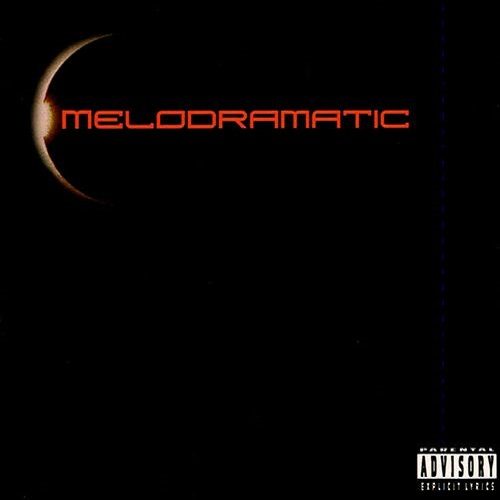 When you’re an independent record reviews website that openly advocates giving new artists “their big shot” you’re bound to receive some unsolicited material that crosses your desk headed towards your headphones. Melodramatic’s album was one of these, and even though I had previously checked out their “Melo Deez” and found them to be better than average I was still sleeping on the full length. Somehow every time I got around to thinking about unwrapping it something else came along to attract my attention. One of their employees sent me an e-mail though — normally hassling me doesn’t work but when he said, “If you’re not on that fake commercial shit you’ll listen to it” I thought I’d take up his challenge and see if Melodramatic lives up to their indie cred.

One thing you can’t argue with is that Melodramatic is the total package – as the back cover of the album says their shit was “written, produced, arranged, performed, engineered and mixed by MELODRAMATIC.” They’re definitely not slumping on the work ethic. I also took note of the fact that Rosko and Los (the rappers slash producers slash engineers) hail from Maryland, and say so with pride throughout their LP. Many people shout out Baltimore as a hip-hop hood in their rap songs, but most people claiming residency don’t seem to be anywhere near it.

As for the album itself, the overall effort put into making this a quality hip-hop release is top notch – everything seems well mastered and produced. Out of 16 tracks, there are some really dope joints. “Some Old School Shit” may have a cliche title, but it’s got a bouncy swing beat, excellent samples of Just-Ice, and nice piano riffs. “Abstract Reflections” walks that fine line between being too laid back and just smooth enough to remind you of the unheralded “Blowout Comb” album by Digable Planets. “Hectic Daze in a Beautiful World” is probably the best track simply because it’s the riskiest – a relatively relaxed track suddenly breaks into crunchy guitar rap/rock and then without missing a heartbeat slips back to sublime bliss. If you’ve ever heard “A Day Like Any Other” by Siah and Yeshua DapoED it will definitely give you flashbacks.

Some of the songs miss the mark though for no other reason than they just don’t have “it.” You know, “it.” That intangible quality that can be missing even when two superstars like Method Man and Redman get together and still release a lackluster album like “Blackout!” It, in this case, can be blamed both on the occasionally uninspired beat or misguided idea lyrically. The rapid-fire antics of “Watchu Wanna Do Now” don’t really hit, and the pseudo-patois Jamaican chanting doesn’t help; then the didactic chorus kills any buzz at all. The sex-me-up flavors of “Love to a Star” really doesn’t pack a punch – the chorus is tight but the beat underneath the main verses has no kick despite an ample amount of kick drums. And even though Los and Rasko have ample skills on the mic, a song called “Mighty M.C.’s” still comes off like truth stretching since they won’t be mistaken for Rakim or even fellow underground contemporaries like J-Live. It would probably work better without the goofy hook that sounds entirely too Swizz Beatz-esque.

It’s hard to know what to make of Melodramatic. When they click, they’re as good as any up-and-coming rap group in the U.S. from any state that you could name. Some of their songs are brilliant; and some of them are just corny or unlistenable despite the fact you can’t fault the TECHNICAL aspects of the songs in lyrical content, flow delivery, and sonic production. Ironically one of the best cuts on the album is a 1:20 long interlude called “Take Me Away” that will have people catching the ghost of when DJ Premier used to throw away great instrumentals as interludes on GangStarr albums. Does Melodramatic have flavor? Sho’ nuff. But they need to refine their sound and seperate the wheat from the chaff; and come back with more songs like “Melo Deez” and the humerous “Yes I’m Crazy” next time out. Big up to the MD’s though, they’re definitely not “on that commercial shit.”