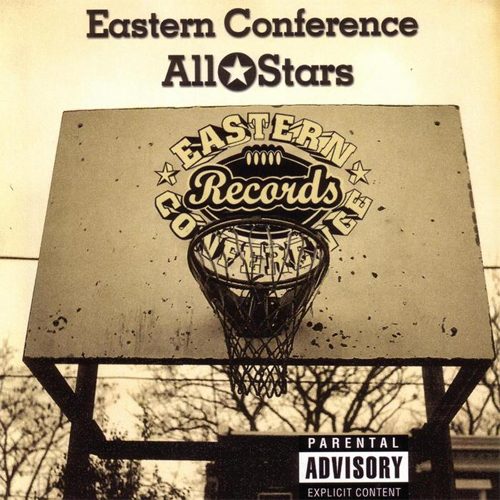 If you didn’t already know who The High & Mighty are, allow us to introduce you to the rapper Mr. Eon and the producer DJ Mighty Mi. They released a well-received but commercially slept on album “Home Field Advantage” which features excellent musical production and Eon’s own shall-we-say UNIQUE lyrical style. Mr. Eon is one of those underground rappers that really causes people to draw lines in the sand – you either like his style or totally hate it. Eon’s got a raspy, slow-flowing rhyme scheme that often sounds like he’s slobbering all over the mic – in fact in a spit-tacular sense he could give even Thirstin Howl and crew a run for the money. Did I mention money is white too?

At this point, you’re probably about ready to hang it up and say, “Fuck this kid I’m not interested.” WHOA, hold up there. Eon’s not so quickly dismissed. He has a darkly macabre style that is humerously ill – in fact similar to fellow underground white rapper Cage, who duets with Eon on two tracks and is part of their own supergroup called Smut Peddlers. Eon also has a tendency to flip nice punchlines, as you’ll note from tracks like the Alchemist produced “E=MC^2” featuring Evidence:

“King Solomon to your Senate and Congress
Lyrical Tralfazz, turning thugs Amish
Quadruple, to your Uno, what you know?
Got weight like two sumos on Pluto!”

Now maybe you’re ready to reconsider Mr. Eon as an MC? Then you probably want to check out the fact that his producer DJ Mighty Mi provides him some of the tightest beats in the industry. The sublime joy of this album is hearing the dark and thick sonic grooves of songs like “The Meaning” (previously released) or the original mix of “Hands On Experience Part 2” (previously unreleased). Since this is also the “All Stars” of Eastern Conference, The High &Amp; Mighty split the difference of twelve tracks and give five to people who appeared on their label. You’ll hear Mad Skillz doing a humerous Danja Mowf produced remake of “Lick the Balls” (by Slick Rick, if you didn’t know) as well as Smut Peddlers tracks like the ill “One on One” or hip-hop porn manifesto “The Hole Repertoire” with a slick little Jay-Z sample twisted into the song’s hook.

One of the illest tracks may be the EC All Stars group collaboration “All In Together” featuring Eon with Baby Black and Pauly Yams, slithering over some straight 70’s disco funk. It’s hard NOT to like this cut even if you still have issues with Eon’s flow and delivery. As I said before though, Mr. Eon’s style is a dividing line in the sand for underground heads – and I stand on the side that says “Damn, that kid’s kinda nice yo!” The thing about Eon’s voice being so distinctive is that it almost NEVER fails to get your attention on a track. Just peep his words on “Mind, Soul & Body”:

“Fuckin with the Starbuck, don’t even bother
You be flirtin with death, like playin Frogger
Now a beat ain’t a beat without a kick like soccer
I keep a bag of chronic {*INSIDE MY LOCKER*}
[..] Now who’s to say who’s not, a real hip-hopper?
Two years ago I was a real floor mopper
I ain’t from the Bronx like Benny Blanca
If she don’t call me back, don’t even jock her”

That’s why this virtual “Pure Uncut Hits” compilation of tracks from his label, both with and without him, is a sure listener. Many of the tracks here are early versions or unremixed tracks that later appeared on “Home Field Advantage” so if you like what you hear here, be sure to check out their full-length on Rawkus. For both the beats and the humerous rhymestyle and punchlines of Mr. Eon, I give it two solid THUMBS UP.