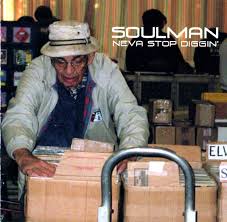 If you’re a beat head, a crate digger, or a vinyl junkie like myself, then you will no doubt have come across Soulman’s name within your adventures. Phill Stroman wrote for “RapSheet” in the early 90’s, one thing lead to another, Soulman began producing beats, and finally became known as the man in Philly with some of the best records around.

His mixtapes are well known for featuring some of the best, funkiest, and unusual tracks, all showing love for the art of the breakbeat. Soulman doesn’t believe in boundaries, and for his new CD he shows you what it truly means to be obsessed for the grooves that pulse on the wax.

NEVA STOP DIGGIN’ almost comes off as a resume of sorts, with Soulman showing his skills in finding those beats and samples you may have heard in the last few years. Ghostface Killah? Beatnuts? Soulman shows you where they got their sounds, and does it better. Most of the songs are merely collections of the best segments you’ve never been able to find. Hard funk, sweet soul, dixieland jazz, children’s music, library records, disco, country: the man has no musical enemies and it comes off sounding great.

Attention towards classic breaks and old funk 45’s has grown in the last few years, with Egon hooking up with Stones Throw Records, the FUNK SPECTRUM album series from England and most notably the chaos that came from the little CD that could, BRAINFREEZE. Soulman offers two tracks to soothe those who have, in his words, “frozen brains”, the awesome “Sockit To Me Baby” (where he combines his own funk gems with songs used on the DJ Shadow and Cut Chemist CD) and the very nice “Soul Set”.

Sound quality is excellent, so for all of those who’ve been jocking Soulman for the goods, you’ll get off on this. Listening to NEVA STOP DIGGIN’ will no doubt make you jealous at times, making you wish there was more time in the day for hunt down those classic sides. Soulman cuts the crap and offers it to you, but also suggests that there is much more out there to dig for and crave. There are also two songs with vocals, Soulson of the Nextman salutes the creator of the CD with the “Neva Stop Diggin’ Theme”, and a curious track from 1988 by one ‘Phill Most’ surfaces in the form of “Old School Dissin'”. Hmmm…