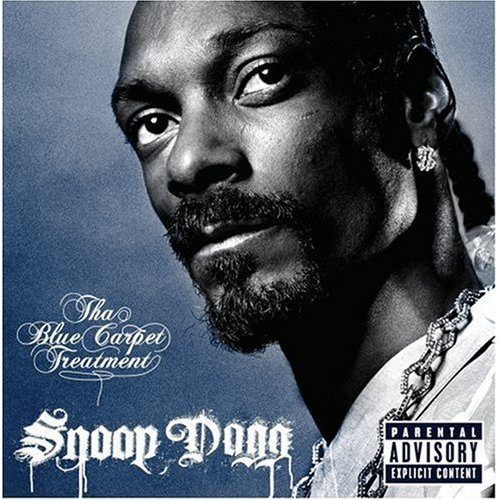 All month long XM satellite 65 “The Rhyme” has been promoting “Dogg-vember.” Every so often you’d hear a message from Snoop Dogg promoting his “Welcome to the Church” show, or a week of classic West coast raps, or a song from his new album, or he’d simply say “Tha Blue Carpet Treatment drops November 21st. That don’t have nothin’ to do with The Rhyme – I just wanted to say that shit.” If this album was promoted as hard on other media outlets as it was on satellite radio then Snoop should have no problem with album sales this week, despite going head up with Jay-Z’s first official album since “retirement” and a brand new posthumous 2Pac album. Snoop traditionally does well anyway thanks to a loyal fanbase that has followed him through thick and thin – label changes, producer changes, a mountain of legal problems and a life that’s got more ups and downs than a roller coaster from hell.

Still through almost a dozen albums Snoop has done one thing consistantly with each and every released – charted hits. A lot of people in the last year or two have proclaimed that they are “bringing the West coast back” in their raps, but since Snoop never left, how could the West coast ever leave? He’s been holding this shit down since 1992. With the “Dogg-vember” in full swing it was time for Snoop to do his thing and release another hot single, although “Vato” seemed like a pretty odd choice. That’s not a knock on the song itself in any way, as The Neptunes knock out one of their most gangster beats while B-Real makes the song feel surreal with his chorus contribution, but it just seemed like way too hard of a song to ever successfully crossover:

Looking at the cover of “Tha Blue Carpet Treatment” one doesn’t even find “Vato” mentioned as a track on the album though, which leads this writer to suspect it was a “street single” all along and never intended to crossover – a fairly common practice these days especially when mixtapes and satellite radio can play completely uncensored tracks. Instead the front cover sticker directs you in large bold print to the Nottz produced “That’s That” featuring R. Kelly. It should be noted the full uncensored title is actually “That’s That Shit,” and any radio version will have to drop the Slick Rick reference to “the royal penis” in the open:

“Let’s get this party jumpin, me and Kel gon’ get it bumpin
They humpin like when it’s over we gon’ ALL get into somethin
The Dogg is fresh, Southside without a vest
Nothin on my chest but these ladies up out the Midwest
I must confess that in the Chi you so blessed
Leavin nothin on my mind but Doggy you would say sex
This ain’t a test, you fuckin with a cold mess
Meet me in Chicago, let me hip you to this real West”

Personally “Vato” is much more fun but any track that has R. Kelly on it is designed to get the job done. The same can be said of the Akon starring and produced “I Wanna Fuck You,” which again is going to require some clever editing for most promotional outlets but should still be a monster hit once it’s given the right treatment:

“Don’t tell, won’t tell
Baby say I don’t talk Dogg but she told on me, oh well
Take a picture with me, what the flick gon’ do
Baby stick to me, and I’ma stick on you
If you pick me, then I’ma pick on you
D-O-double-G and I’m here to put this dick on you
I’m stuck on pussy and yours is right”

Snoop’s not apologetic about any of the foul language on “Tha Blue Carpet Treatment” and he shouldn’t be since he’s been like that from day one. I do however question his increasing insistance on representing Crip life, with EVERYTHING in his life having to either be blue in description or outright stated as part of a Crip lifestyle. Doesn’t Snoop have enough headaches without some opportunistic banger taking his declarations of Cripdom as an excuse to dump on his set and kill a vet? Snoop is obviously too busy recording and promoting music to actually be out warring on the block, but all those blues do send a message and eventually some naive Snoop fan is going to wind up in trouble imitating his hero’s fashion sense at the wrong party or in the wrong part of town. Ideally Snoop could just tone it all the way down to gray because none of his biggest hits have ever been predicated on Crip-dom anyway, from “Gin and Juice” all the way up to “Drop it Like It’s Hot.”

There are plenty of hits to be found on “Tha Blue Carpet Treatment” that fit this category, even if they are probably not destined for airplay or the Billboard charts. Fredwreck’s pulsating “Crazy” featuring Nate Dogg is a guaranteed trunk-rattler, while Rick Rock’s “Candy” is destined to bounce the hydraulics of the hyphy set, a fact damn near guaranteed by an all-star list of West guests including E-40. Snoop can’t resist narrating a set trip on “Gangbangin 101,” although he at least promotes unity by rapping with The Game over Terrace Martin’s track. Personally I’d much rather get down with the suprisingly hot Jamie Foxx produced “Psst!” – he shows a surprisingly Neptunes like deftness for making dope beats. There’s also the all West “Don’t Stop” featuring Kam, MC Eiht, Goldie Loc and Kurupt and the somber Dr. Dre produced “Imagine” featuring D’Angelo, where Snoop openly admits it’s time to “tone it down a bit” and Dre raps “Imagine Biggie with his son, imagine ‘Pac gettin called pop by one.” We all wish.

There’s little doubt that “Tha Blue Carpet Treatment” ultimately qualifies as a successful follow-up to “R&G (Rhythm & Gangsta) – The Masterpiece,” although there’s also little doubt that Snoop is not pushing any new boundaries or exceeding already set expectations. Despite the dissapointing insistance on Crippin’ it up every chance he gets, Snoop’s still going to successfully eat off this album provided he can stay out of the line of fire long enough both metaphorically and literally.