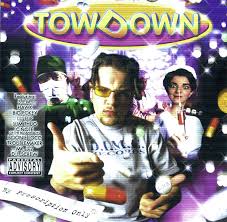 Tow Down :: By Prescription Only

With the pharmacology theme being common in hip-hop today, it was only a matter of time before before somebody release a rap album that was available “By Prescription Only.” Tow Down is that man, releasing an album that is parts Southern rap compilation and part hardcore gangsterism.. but isn’t that dude on the cover white?

Yes, that’s right – Tow Down is as hard as they come but he’s also as pale as Snow. He’d like to let you know that when it comes to this rap thang, the white boys are “Also Cool” – a cover version of Eazy-E’s “Boyz N the Hood” that is actually pretty good:

“Now white boys in your hood are also cool
You come talkin that trash, don’t be no fool
Knowin nothin in life but ‘dro rap and rock
White boys comin down, make room on your block”

If you’re a fan of the Southern sound, Tow Down’s got plenty of lean he’d like you to get krunk off. The album even includes a remix of “Country Rap Tune” by the late great D.J. Screw, and the track itself features the thugged out rappers HAWK and Big Pokey. Both versions take the Texas sound and make some funky guitar playing by Dustin Faigen (who has repeat performances throughout) match perfectly with the slow funk of album producer Derek ‘Grizz’ Edwards. The only differencce by the Screw version is that it’s slower and even MO’funky.

You may not be familiar with a lot of Tow Down’s guests unless you’re deep into the scene Down South, but folkers like C-Note of the Botany Boys (on “The Virus”) and Lil’ Flip (on “We Shinin'”) keep thangs rolling throughout. Tow Down’s sole mission is to take as many drugs as he can get his hands on; as evidenced by his words on the South Park Mexican duet song “Slant Eyes”:

“I get high each second of every minute, of every hour
Like Cheech and Chong blowin a bong, or rollin in the Eddie Bauer
I stay tall like skyscrapers
Weeds I was around so I must have paper
Catch my vapors, and you can get high too
Whether a gram for you, or a pound for your whole crew
Whatever you need, I got weed
From liquid drip to dip to hydro to ecstasy”

Some doubters and haters may feel that this is a gimmick to get Tow Down over, but there’s no reason to think he’s not getting this laced up – after all 90% of all drug abuse in this country isNOT in the hood; it’s in the suburbs and college dorms and trailer parks. The album is all about moods and vibes though – which may or may not be induced by the medicinal influences. You can’t argue with the smoothness of “Emotions” though with a funky Eurythmics sample – and as if to prove the point that wasn’t enough they do it again with an ultra-Screw-esque slowed “Here Comes the Rain Again” on the track “Serial Lyricists.” This is a mood piece – songs you can ride to, or songs you can smoke to. If you’re thinking about the fact that a white boy hooked it up, it’s possible you missed the point – listen to “Club Hoppin'” and see if you can figure it out. For those who already like the sound of artists like Eightball and MJG or Scarface this album will fit right in – and the guest artists shore up any weaknesses in Tow Down’s delivery. Musically it’s definitely fat enough to ride to.

Tow Down :: By Prescription Only
7Overall Score
Music8
Lyrics6