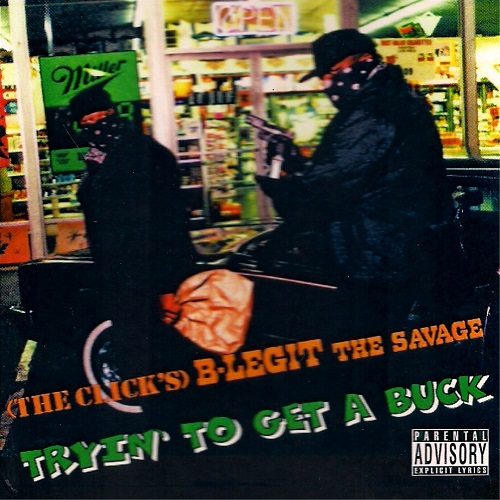 Nowadays Jive Records may be more known for being home to Britney Spears and boygroups like ‘N Sync and the Backstreet Boys, but not that long ago Jive helped boosting and building the careers of many hip-hop legends (KRS-One, A Tribe Called Quest, Whodini, Jazzy Jeff & The Fresh Prince, Kool Moe Dee, Too $hort, Schoolly D, Spice 1) as well as offering opportunities to acts who wouldn’t stand the test of time (Fu-Schnickens, D- Nice). Often Jive would wait for groups to have regional success on independent labels before it re-released their material on a national level. This album is an example of that strategy. E-40 and his Click had moved considerable units in the early ’90s, before their Sick Wid’ It Records releases profited from worldwide distribution by the Zomba Recording Corporation. Around 1994 Jive started re-releasing albums Click members had recorded one or two years prior to that. As it was the case with these other Bay Area crews, the Hieroglyphics and Too $hort’s Dangerous Crew, everybody was in on the deal, not just the star of the collective. That’s how B-Legit The Savage, E-40’s cousin, became a rap star. Apart from the fact that some people don’t like gangsta rap period, some have made B-Legit a prime example of the gangsta rapper with no skills. Personally I think he’s quite entertaining. And that he entertains me is exactly what I expect from a rapper. B-Legit has personality and presence on the microphone. I rather listen to a rapper who has these qualities than one who has all the rhyming skills and is full of that hip-hop spirit but comes across like a kid who’s found a toy, basically enjoying himself and not entertaining a lot of others.

Of course, like the title of this album suggests, B-Legit was only ‘tryin’ to get a buck’ with this release (as was Jive). On the front cover you see him masked in front of a store sliding a clip into his gun. Now there’s a type of cd cover you don’t see anymore today. “Tryin’ to Get a Buck” is indeed ‘gangsta rap’ and as far from ‘hip-hop’ as it could get at that time. We know that gangsta rap is sometimes battling its own demons. The combination of his artist name, B-Legit, with his moniker, The Savage, is an indication that this rapper is not without contradiction. And indeed while the name ‘B-Legit’ is not only a testimonial to a legit lifestyle but also a message to anyone who hears it, preparing to rob a store on your album cover sends a slighty different message to the kids. Let’s take a closer look at it. The album is divided into a ‘dank’ and a ‘drunk’ side. The Dank Side starts right off with Legit going back to his childhood days. In “Way Too Vicious” he raps:

“Loungin’ in a Deuce, gettin’ wild and loose
a young loc’afied fuckin’ with St. Ides
Watchin’ my brother cause I’m lovin’ to pimp
and I can’t wait until I learn his limp
so I can walk that walk, man, and talk that talk
sport his clothes and fuck much hoes
Cause as a youngster I never knew naythin
but I knew a Franklin could get me some dank and
I can get a ounce, break it down to twenties
make my money back and I still stack plenty
With this attitude, man dude, I knew
that I’ma be a savage in 1992
A hog muthafucka, filled with anger
a 30 round clip with one in the chamber
And my mean mug file make me look suspicious
(Why is that?) because I’m way too vicious”

“Can’t Fuck With Me” continues the theme: “A born thriller, my mama had a killer at birth, dude / a young savage straight breaded off soul food / and by pre-school they didn’t wanna see this fool in class / cause I was all about the cash / breakin’ hoes in the tunnel for they milk money / I would’ve fucked, but the little cock smelled funny / It was runny with a slight scent of the fish / and that’s the reason why I hit em with my fist”. Come on, really? It wouldn’t be the first time a rapper mixes (or makes) up things when he’s indulging in childhood memories. It’s not my job to decide if B-Legit is credible, because even though these tales might sound real to some, they are fiction to me as I listen to this album like I would read a book. And from a fictional point of view I kind of dig the way Legit starts with his childhood to explain the course both his portrayed life and his debut album take:

“Expelled cause a nigga was a straight dog
a straight hog, nigga majored a straight mob
I got a job when I was like 1-2
I used to tell em when the po-po’s came through
At the corner I was posted in a oaktree
lookin out for Vallejo’s P.D.
and when they came, a nigga yelled: “Post down!”
and watch a hood turn straight into a ghost town.”

As inevitably as young Legit starts dealing dope himself, the song turns to that subject matter, with E-40 changing the lines of the lullaby that goes “Row row row your boat gently down the stream” into “Roll roll roll your dope up and down the street” for the chorus. By now Legit’s on a roll himself: “And now I’m older, a soldier with cash flow / call me a hustler on the go” – from here on that’s the theme of the album. Add to that drinking, smoking and screwing, joking and some savagery and you end up with “Tryin’ to Get a Buck”.

Sounds like the usual crime-ridden rap album. Well, it’s more than that. What do you do when you have a rapper that sounds unwittingly bored and careless in his delivery? You put some funky-ass music to it to make him sound really cool. That’s what producer Studio Ton achieves on this album. Musically every track here sounds different without betraying the trademark Vallejo sound. The music comes in different tempos and different degrees of funkyness. While some funk is rather predictable in its course and construction, this one is more in the tradition of George Clinton’s P- Funk: like B-Legit in his younger days it’s wild and loose. It’s full of surprises. Made up of smooth flutes, funky guitars, a monster bass, fat beats and keyboards that are ready to conjure up any sound desired, the music on “Tryin’ to Get a Buck” meets high standards whether you’re a layman or a professional. The sound is not ‘dirty’ (as it tends to be in the South), but rather ‘clean’ and polished but all the while still uncontrolled. The highs slide smooth into your ears while your body vibrates from the boom the bass and the beats produce. You gotta love it.