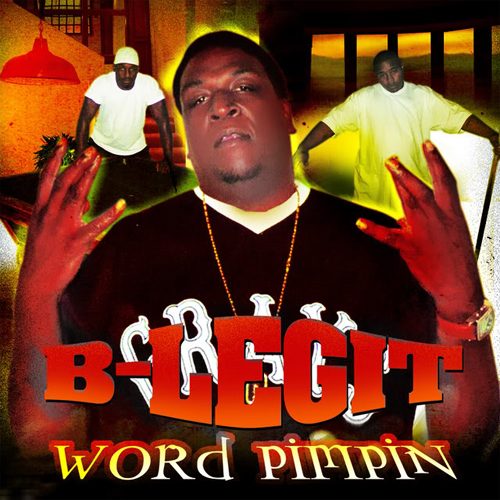 His name is an assertive statement testifying about his rap skills – the boy “be legit” on the mic. If there was any member of E-40’s who could break out of The Click on his own, it was 40’s cousin Legit. His distinctive voice was the glue that held together Click hits like “Tired of Being Stepped On” and “Let’s Get Drunk,” and added an extra mannish flavor to classic 40 songs like “Sideways” and “Doin’ Dirt Bad.” His first two solo albums, “Tryin’ to Get a Buck” and “The Hemp Museum,” did respectable numbers for Jive Records. Somewhere after that though, B-Legit’s relationship with Jive soured. While they continued to release E-40 and Click related albums through the 1990’s and beyond, Legit’s solo albums bounced around to several different labels. A couple years ago it seemed like B-Legit might have found a home at Koch, but 2004’s “Word Pimpin” finds that he’s moved on again and now is serving his dope via Outbac Records. I have my own doubts that last move was for the best, given he went from an outfit with some credentials and distribution (even though some wits have coined them “the label where old artists go to die”) to a label whose website is highlighted in big bold letters on the back of Legit’s CD but is “under construction” when you actually try to peep it.

It turns out “Word Pimpin” is not a bad album, but it’s entirely for the wrong reasons. While this is ostensibly B-Legit’s album, with his name on the binding and picture on the cover, it’s more accurately a compilation album with B-Legit acting as the adhesive keeping THESE rappers together. One of the MC’s prominently featured throughout is Baby S, who is notable for two reasons: making his national debut on Kurupt’s “We Can Freak It” single, and an uncanny vocal resemblance to Devin the Dude. Since that 1998 introduction Baby S has if anything gotten to be MORE like Devin in his style and delivery, and if you didn’t know better you’d swear the rapper who opens the album with “Heat Rock” is the Dude himself. B-Legit’s voice breaks you out of this illusion, even though his appearance on the track is very short:

“I come heat rockin
Skeet swootin on down your block an’
‘gin zo’in and I keep choppin
I keep shootin and I keep poppin – it ain’t stoppin
our uzis and I get the glock in, how we rockin
Blood spills, from drug deals, how the slug feels
We keep ’em hot, and you know we got it locked
You ever on the spot when you visit the coast, hit me up”

That’s how it tends to go on “Word Pimpin” – short doses of B-Legit surrounded by large portions of other MC’s trying to make a name for themselves. One of those who does so successfully here is Q-Z; ironically, he’s reminiscent of Kurupt back in the early part of his career with Death Row and the debut of Tha Dogg Pound that came shortly thereafter. Q’s definitely deft with the tongue and flipping syllables, though not at too much expense to clear diction. Once again “Heat Rock” provides the illustration:

“Who want it first? Club shit, or the street shit
My credibility is smashin shit – you don’t want none!
Raise up, my ghetto weaponry is unbelievably loco
Focus on my hocus pocus, take notice, pump your brakes
Snake niggaz listen as I suffocate ’em
Q-Z say my name and as you say it start runnin
Lyrical warfare, kamikaze-turvy
Worldwide in your system like a virus in the Matrix”

Credits are few and far between in the scant liner notes, although one would believe Tabis and/or Outbac Productions handled all the music. Either way, they didn’t do a bad job. “Robbin You” has a pleasant West coast bounce of layered pianoes, synths and drums that are built up and stripped down throughout the song to create impact. “Ryders” is the kind of pimping you’d expect from Legit, although a whole variety of artists other than him are rapping on it – most notably Baby S, who namechecks Legit even though he can only be heard in the background saying “we be ridin.” S continues to be the most easily recognized and notable voice on tracks throughout. He pimps hard on “Biology”, a track that even SOUNDS like the type Devin would bust a rap about bitches and weed on, or that E-40 would get perved out on. It works on both levels. Baby’s introductory verse had this reviewer catching the holy ghost:

“On and on and, to the break of dawn
Before I smoke weed, I need the cou-pon
Kasino is the gang I bang and it’s official
My hollow points shoot through my verses like niggaz tissues
A nigga bout to hit you, but fuck it the homey hit you
Police draw down, hop fences and dog pounds
Cause in L.A. we known for hoppin yards
I got a blue t-shirt with the Seattle bars
Why my pops beat me down when I was a young buck?
Cause a little nigga like to get my dick sucked (God damn!)
Niggaz hatin causin I’m droppin heat with 8 bar
And Tony Draper puttin 50 on my golden drawers”

Other than the references to L.A. and to Suave House, two places Devin has never been from, you’d never know it wasn’t him. This might be the album’s best track, as Legit and Q-Z both check in over the hard funk beat. You can also hear Legit introducing several rappers over the big twonk bounce of “How Tha Game Goes,” but it’s dissapointing that he’s not busting verses on the album’s title track that follows – he just talks on the outro. Every time you want to get mad that this isn’t really a B-Legit album though, some fly shit snaps you right back to enjoying the shit, like the Baby S, B-Legit and Q-Z jam “In My World” that has an extra smooth beat. From the slow flowing keys of the hard “Savage Built” to the West coast synthetics of “Playa,” the beats are largely as legit as B is. “Say My Name” is a hella fresh closer, where the featured MC’s Baby S and Q-Z break down their names like old school MC’s but with 21st century attitude. One can only conclude at the end of this presentation that B-Legit is attempting to “pass the torch” to the next generation of rappers, although he could have done so in a much more clear and concise way. A better title for this album would have been “B-Legit Presents Baby S and Q-Z – Straight Word Pimpin.” As long as you don’t make the mistake of expecting it to be a Legit album, it’s surprisingly good. It’s just a damn shame this CD has no distribution outside the West coast, and the label and their website both seem busted. Someone with more clout needs to put this out.