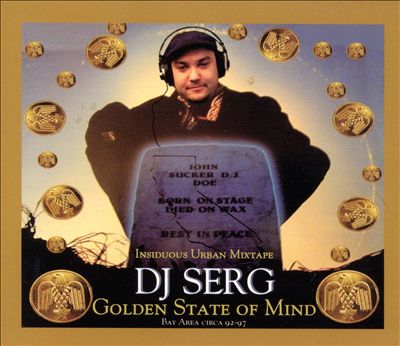 You ask anyone to name some rappers from California and, whether they know a thing about rap or not, you’ll probably get the same few answers right off the bat: Snoop, Dre, Eazy mufuckin E, Ice Cube, Ice-T, Nate Dogg, E-40, etc. These are, no doubt, correct answers, but they’re all also gangsta rappers who represent only a sliver of what the left coast can do. Even so, California rap is almost synonymous with gangsta rap, even to those knowing rap reasonably well, and that image is difficult to change. Crews like Project Blowed, Livin g Legends and Heiro have all done their part to represent Cali in a new light, but mixed feelings abound about all three of these throughout the underground. To most, the west side doesn’t really seem to offer much to fans of straight-up hardcore hip-hop which is so readily available elsewhere; why wind your way through heady Aceyalone lyrics and strange beats when you really just want to hear Freddie Foxxx or Cage?

Recently, this has changed a bit as underground acts in the Bay are becoming more and more prominent. Stones Throw records, with much help from Madlib, has been consistantly putting out slightly more normal work from cats like the Epitome, Declaime and (up for the ‘weirdest concept for an album’ award) Quasimoto. Since Xzibit blew up, Rasco is moving up into his place as the token hard-ass rapper over incredibly dope beats, and, although the Cali Agents album was sub-par, the singles from his upcoming release are lookin good. The talented due of Encore and Architect are helping the Executive Lounge crew make a name for themselves. And who can front on Quanuum Spectrum? Blackalicious are universally good and DJ Shadow is still your favorite DJ Savior. In light of all this progresss, DJ Serg is here to show us that, well, it’s always been this way; the cover of “Golden State of Mind” also says “bay area circa 92-97.”

This tape isn’t as much of a ‘best of’ as it is a collection of b-sides, remixes and vinyl only exclusives that probably slipped through the cracks through the years. Some of the names are familiar to anyone somewhat knowledgable about hip-hop; Bay mainstays like Rasco and Saafir make appearances. But Serg spreads the props around, and the cats who aren’t quite as notable also represent to the fullest. I get the feeling tracks like Charizma’s “My World Premiere” were local gems that didn’t really kick-start careers; that track has been sampled by Encore and Dilated Peoples. Bored Stiff drops the incredible “Peaceful Rotation ’92,” easily one of the best tracks in the mix. These hold their own with other slamming offers from the better known emcees on the tape. Encore’s “The Undercover” is the most versatile track I’ve ever heard from him, on some dope-slangin-in-Columbia-story-telling shit over a flawless Architect groove. Hobo Junction’s “Rock the Show” is tight and gives the *other* Jay-Z a moment to represent. And word up to the inclusion of what might be my favorite hip-hip track of all time, “Swan Lake” off Blacklicious’s impossible to find on vinyl, “Melodica” EP.

Possibly the best thing about Bay area hip-hop is that the beats almost never fail. Even if the lyrics often leave something to be desired, greats like Peanut Butter Wolf, DJ Shadow, Chef XL and Architect, among others, provide bangers that make any emcee sound good. As usual Rasco comes off good, but the backdrop from PB Wolf (I think) makes “Hip-Hop Essentials” a keeper. That being said, it’s odd that the instrumental portions of the mix are the weakest points. DJ Shadow and The Groove Robbers contribute the amusing but relatively pointless “Entropy (parts c,d,e)” of which the only notable part is an early flipping of the same sample from Ghostface’s “Buck 50.” As much as I like “Who Got the Props,” Peanut Butter Wolf’s montonous re-working of the beat on “Lunar Props” goes on too long. DREAM and P-JAY drop some knowledge on graffiti which is insightful, but seems a bit out of place (and if you bought this tape, you probably already know everything they say). Serg’s mixing is also suspect in places; the beat matches are dead on, but I’m not the biggest fan of excessive juggling on tapes, and sometimes I just want the shit to keep on keeping on. Also, the format of the tape (b-sides and exclusives) limits the selection a bit. While it may be convenient to throw on Dereliks’ happy-go-lucky “Phrase That Pays” after Encore’s “The Undercover,” it just don’t feel right.

All in all, you get exactly what you think you’re getting with this DJ Serg concoction: a reminder that, even though the Yay is getting some dap finally for having a straight-ahead underground scene on par with New York, it’s always been this way. Plus the intro is a vocal sample from Steve Buscemi.