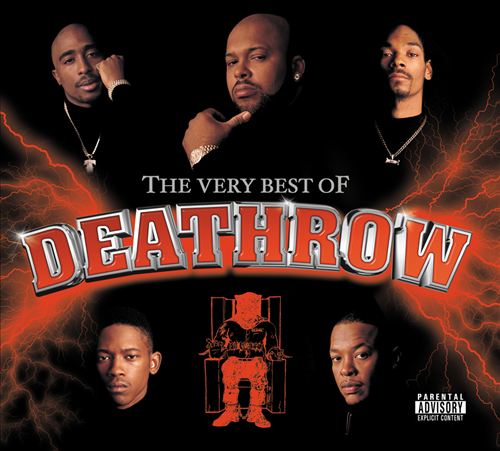 Death Row Records was once a dynasty on par with Def Jam. The west coast scene revolved around Suge Knight’s business dealings in the early to mid nineties, because of both the quality of the music that was being made and the drama that was always around. After 2Pac’s death and Dr. Dre’s departure, however, things went sour quickly, and Death Row seemed to be facing more lawsuits and jail sentences than release dates. Suge has continued to release music, but much of the “new” material has been recycled in some way or another. “Nu-Mixx Classics” was simply a remix project of 2Pac’s previous Death Row work, and the new “Very Best of Death Row” compilation is a double-case of recycling in some cases. Classics such as “Gin and Juice” and “Nuthin’ But a â€˜G’ Thang” appeared both on the original discs and the 1996 double-disc “Death Row Greatest Hits” before popping up here.

Assuming you have been living under a rock for the past ten years or are just now deciding to get into Tha Row, this will be a jaw-dropping collection of classic tracks from the fading label. Taken as it is, “The Very Best of Death Row” is stunning material. The problem with this is that if “All Eyez On Me,” “The Chronic,” and “Doggystyle” rest in your collection, you already own half of this disc. The Dogg Pound’s “Dogg Food” adds another two tracks, as does the “Above the Rim” soundtrack, so if you happen to have these as well, there are only three songs you might not already own.

The album opens with 2Pac’s “Against All Odds” from his Makaveli album. This is a slightly odd selection considering the firepower that resides in the Death Row vaults, but a great song nonetheless. A string of classics follow with the “California Love” remix, “Gin and Juice,” and “Nuthin’ But a â€˜G’ Thang.” Again, I have heard these songs so many times that they coast by in no time. It’s a testament to the success of Death Row that such a large portion of the songs included are permanently engrained in the consciousness of hip-hoppers. “Regulate” makes a welcome appearance, and even the most obscure inclusions like Lady of Rage’s “Afro Puffs” should be familiar to some.

“Let Me Ride” and other slightly lesser classics such as “Ambitionz Az a Ridah” fill out the listing. There are numerous cuts that could have been included that weren’t, and one of the Dogg Pound songs seems like a stretch. For the most part, though, the selections are logical and will make new listeners happy. “Tha Shiznit” is a personal favorite that is somehow missing, but it’s tough to cover every base on one disc.

One bonus cut, “Off tha Chain” by Petey Pablo and Kurupt, is included. Though certainly not necessarily worthy of a place on the album, it is a great addition and provides hope for things to come. This song comes at track fourteen, which concludes a surprisingly brief record considering the circumstances. Many factors suggest that this is being released solely to move units. The tracklisting includes all of the essentials, but with a label as successful as Death Row, there are far too many hits to do justice to a single disc. Maybe the reason they didn’t try a double album is that they already tried that nine years ago. A handful of tracks overlap between the two “Best Of” albums, which seems to defeat the purpose of purchasing both. Suge might be trying to pigeonhole the people who have not been exposed to the G-Funk era before. The biggest problem I have with a release like this is that there is no reason to buy it if you are already acquainted with Death Row. They are releasing something that is assumed to be aimed at their fans, but even the casual fans have little reason to purchase it. I’m sure it will sell regardless, simply because of the electrocution logo on the front.

Taking “The Very Best of Death Row” as it is, there is obviously very much to like. Some of the very best rap songs ever recorded can be found here if you don’t already have them. My guess is that you do, though. Outtakes or obscure songs such as “Puffin’ on Blunts and Drankin’ Tanqueray” would have made the album worth looking at for dedicated fans, but since that sort of bonus material is not present, there is nothing of consequence for many listeners. The rating below reflects the actual content, so make sure to scan the tracklisting before buying. If you already have the major Death Row releases, you won’t be needing a collection of the best songs from the inmates.