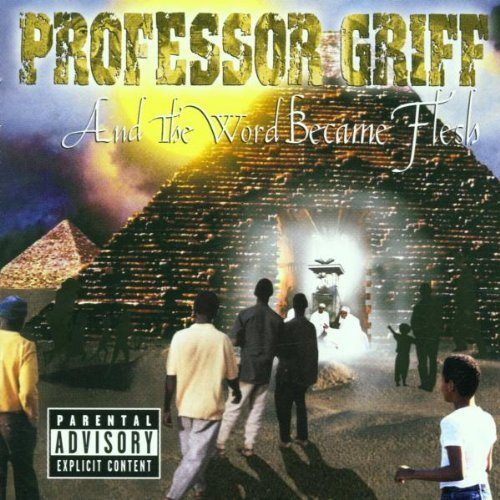 When I came across this and looked at the cover and liner notes, a few things came to mind. The first was “Oh no, another Professor Griff album?”. I’m still trying to get over “Pawns in the Game.” But I’m open minded and was willing to give this a serious listen. The second thing that came to mind was “The Right Stuff? Isn’t this the budget label Capitol Records created to sell low-priced compilations at department stores?” Will Capitol and hip-hop ever work it out? But I’m open minded, and was willing to not let a record label form an opinion.

“And the Word Became Flesh” is not a rap album, in the 21st century sense. It is a rap album of the Last Poets and Gil-Scott Heron variety, where Griff and a number of his friends speak out, spoken word style, about some of the issues at hand. Griff has never been shy about his words, so it’s nice to hear him in this format where he sounds comfortable as a public speaker. Mix that in with the funky soundtrack (all produced by Griff, who also handled percussion duties), and this is one of the biggest surprises of the year.

As the title suggests, Griff allows his thoughts to break free and it is these true thoughts that continue to plague not only the United States, but the entire world, which brings to mind the old War song “The World Is A Ghetto”. While Chuck D’s sole cameo (in “Hypocrites”) is the one song where hip-hop is the target, the rest of the album is a down-to-the-basics essay on life in America. The titles only offer brief clues as to what these tracks are about: “Black Beauty & The Bitch”, “Horizontal Heroin”, or the very brief “A.I.D.S.” (‘Africans In Deep Shit’).

What I like about this album is Griff’s approach to each piece, which are well written and spoken. In his days with P.E., most might remember him as the aggressive and intelligent sidekick, often the one who had too much to say. These days, Griff is on a different level and I think more people would be open to hear him this way than his previous efforts.

On a musical standpoint, imagine coming across some early 70’s outtakes from Issac Hayes. Griff, along with Augustine Aquirre and Kerwin “Sleek” Young manage to bring back the vibe of those 70’s spoken word albums, so if you get caught up in the music for too long, Griff’s voice will command you to listen again. Contributions from Nikki Luxx, Uno The Prophet, Sphinx, and even Umar Bin Hassan of The Last Poets (in the bold “European On Me”) also help steer the album on its path to glory. Vocalist Dee Dei Deionne ought to have her own album, if she doesn’t already.

This is not the same Professor Griff from 14 years ago, but a Professor Griff who is stronger and much more wiser. It’s the kind of consciousness that is sorely missing in today’s hip-hop climate, but if it can create a need for a greater awareness (and acknowledgment) of what’s out there, Griff’s job has been accomplished.