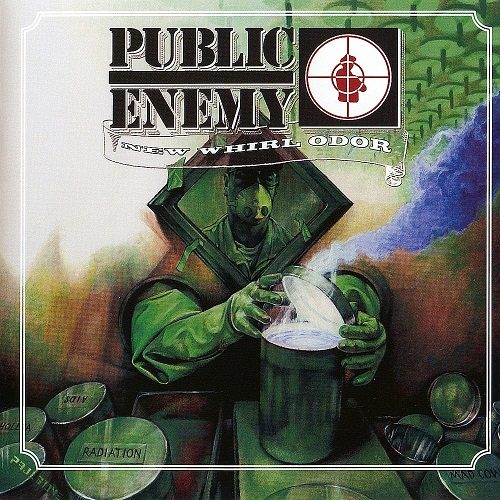 You might ask yourself, “Why Public Enemy?” At least five other new hip-hop albums came out the week of October 4th. The first new album by Twista in over a year. The debut of female seductress Ebony Eyez. A brand new live performance album from Tupac Shakur. There’s no need to run further down the list – you get the gist.

The answer is to the question is remarkably simple though – WE NEED PUBLIC ENEMY. At no time in human history has their confrontational and inspirational music been more needed. Chuck D is one of the greatest orators of the last 20 years, but he’s so much more than that. When White America wanted to hide from it’s own ugly racism, Chuck D was the man to drag them to the truth kicking and screaming. When Black America wanted to pretend that malt liquor and teenage pregnancy weren’t destroying the fabric of the community, Chuck D’s strident voice was a wake-up call to the sleeping. Never at any time in his career has Chuck D been afraid of controversy, and whether right or wrong he’s always going to give you a piece of his mind the way he sees it. The reason his words upset people is that more often than not, he’s 100% right. When Chuck D speaks with that deep, powerful and commanding voice he’s the E.F. Hutton of hip-hop. No, fuck that – he’s BETTER than E.F. Hutton. When Chuck D speaks, people don’t just listen – they HEAR.

Hypocrisy in America may at this moment be at an all time high. “Compassionate conservatism” is a glib phrase to disguise the fact inner cities are crumbling and the exodus of wealth erodes an already disenfranchised educational system. It’s a glib phrase to disguise the fact that hurricanes destroy the low-tide poverty stricken neighborhoods of New Orleans, while federal officials twiddle their thumbs and do nothing to help. It’s a glib phrase to cover the fact the Patriot Act strips Americans of their basic rights, rights guaranteed not just by the Constitution but that are inherent “natural law” for basic human dignity. It covers for the fact that the so-called “war on Terrorism” is actually provoking more acts of terror than it is disrupting. Someone needs to come along and address the horrors of what the elder George Bush once described as a “new world order.” And who better than Chuck D? He was kicking up dust and pissing off people back when we had Bush one point oh. Now that we’re on Bush Part Deux Chuck D is here to remind us that just because the shit is new doesn’t mean it smells any better. There couldn’t be a better title for any such reminder than “New Whirl Odor.”

There was a time in the 1990’s when Public Enemy’s sonic and lyrical attack fell out of fashion. In part it was because a fickle rap audience tired of what they perceived as being preached to switched to gangster boogie and mafioso hip-hop. In part Public Enemy were themselves to blame. The signature Bomb Squad sound that gave Chuck D fiery beats to match his fiery rhethorhic disappeared, and albums like “Greatest Misses” and “Muse Sick-N-Hour Mess Age” left P.E. fans scratching their heads, confused and dissapointed. A much publicized split with their label Def Jam robbed P.E. of their natural distribution channels, so even when their sound and Chuck’s bravado were reborn on recent albums like “There’s a POISON Goin On..” and “Revolverlution,” nobody was hearing the message. It seems that on “New Whirl Odor,” Public Enemy has finally found a partner who can put their music on the store shelves – REDEYE Distribution. Their motives may be strictly financial, but nobody said Public Enemy weren’t trying to make money on their music either. There may be a message with the beats, but Chuck and Flavor Flav still have to eat, not to mention pay their bills. Some people have let the pursuit of money – whether for survival or for bling bling – water down or reshape their message. Not Chuck D.

“Who in the hell told you that you were in heaven?
Platinum, gold, the house and the car
But poverty all around you by far
People living under bridges or in a car
[…]
Cause heaven for whites, is hell for blacks in America
Heaven or hell are two conditions of life
Not a place up there or a place down there
It’s a condition of life, on earth, so value life
Heaven is not things, it’s a higher level of thinking”

Truth on wax, culled straight from the aptly titled “Superman’s Black in the Building.” This nearly 12 minute long G-Doc produced opus closes out the album, and is phrased in several different sections – from a traditional style rap at the start to the slower slam poetry style found in the latter portion of the song these lyrics are cited from. It’s not as though this is the only quotable part of the album. From beginning to end “New Whirl Odor” is nothing if NOT quotable. Chuck D continously throws bombs out that will blow up in the face of the regimented society long since conditioned to complacent acceptance of the uncontroversial. Just take the halfway point of this album “Makes You Blind” for example:

“Black man came first in the sweet name of Jesus
Cost me a Dollar, at the flo’ of Creflo
Like how the hell he supposed to know or see to ask?
In the name of Allah, runnin to the radio
And the TV issues and views shaped by one-sided news
Got us like _Planet of the Apes_ under CD’s and tapes
[…]
Radiation of a radio TV movie nation
on yo’ God damn mind, makes you blind!
You don’t matter, and they don’t mind
Cause these be the things that make you blind”

When was the last time you listened to a rap album that told you NOT to listen to rap albums? But that’s Chuck D for you. He’d rather make sure you’re tuned in to reality and not blinded by all of the media, whether it’s entertainment or fiction disguised as info-tainment. Of course even Chuck needs the beats to tell you these tales. Perhaps the title of their misunderstood 1994 album had it right – there’s as much music in the message as there is message in the music. Songs like the chunky headnodding funk of the Abnormal produced “Bring That Beat Back” prove it:

“They die in Iraq, what you don’t know I rock?
What you under a rock? What you under Iraq? (Get it)
Old cats be beggin us to bring that beat back
Each generation be thinkin that the next one is whack
[…]
I pray to God, I feel like I’ve got a church in myself
Good God uhh, I can’t get no help
I say again health care cut back and it’s whack
Yeah Ab, bring that beat back, c’mon”

From start to finish “New Whirl Odor” is an album informed by strong beats and even stronger rhymes. Chuck D once again proves fearless in his criticism of all areas of life, not even afraid to criticize himself when called for. Even if you don’t agree with everything that Public Enemy has to say you’d be foolish not to respect the dialogue. What Public Enemy brings to the table goes beyond just dope beats and rhymes – and they are definitely dope – it’s an opportunity to open closed discussions and spark new ones altogether. Why is there a war on terrorism and not on poverty? Why is there a war on drugs and not on hunger? Let’s address the issues. P.E. is not afraid to take on this new world order.