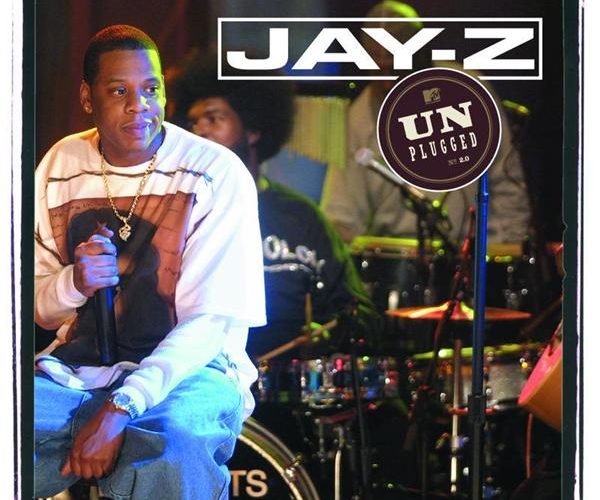 If you thought only Nirvana and Pearl Jam ‘unplugged’ their instruments for MTV, here’s a wake-up call. Since it’s inception, MTV’s Unplugged has included hip-hop artists from A Tribe Called Quest to LL Cool J. By combining the alreadyunplugged live sound of hip-hop band The Roots with the vocals of Jay-Z, MTV gives the whole series a breath of fresh air and showcases a group of rap’s finest on one stage.

Throughout his engaging performance, Jay-Z relies heavily on songs from his recently released “Blueprint” album – six to be exact. To his credit though, two songs from his debut album “Reasonable Doubt” are included: a short performance of the song “Ain’t No (Nigga)” sans Foxy Brown, and “Can’t Knock the Hustle”WITH Mary J. Blige showing up to reprise her original vocals. The three singles from “Volume 2” are also included, and from “Volume 3” a new interpretation of “Big Pimpin'” is offered with the melody provided by keyboards instead of winds. The only song included from “Dynasty” is the hit single “I Just Wanna Love U” with Pharell from The Neptunes showing up to provide his Mayfield-esque vocals and hook.

The fact that Jay-Z has always relied on beats that have some jazzy swing to them lends itself to the ability of The Roots to recreate the tracks live. Hip-Hop’s finest musicians have already been doing this for a while now. Anybody who has seen or heard one of their shows knows that they reinterpolate the music from legendary hip-hop tracks in their performance. Combining the two together leads to some really spectacular show-stopping performances, such as Roots posse member JaguarBELTING out the heartfelt chorus of “Heart of the City (Ain’t No Love).” When she extends it into a freestyle of her own Jigga likes it so much he declares, “I like that, let’s do it again!” and she keeps RIGHT on singing. A few Jay-Z songs that weren’t among his best work are completely invigorated by this live set, including “Can I Get A..” and the formerly insipid “Jigga That Nigga” track. It’s too bad this live version of the song wasn’t on “Blueprint” instead!

This live recording manages to hit almost all the right notes. Jay-Z talks to the audience, cracks jokes, and gets them to participate in providing the hooks and famous lines from his most popular songs. One has to suspect it’s no coincidence this album was released the same week as Nas’ “Stillmatic” was, as Jigga gets the entire audience to scream that he’s so “LAAAAAAAAAAME!” during his performance of “Takeover.” Despite the rumors though, his “Super Ugly” freestyle is not included on this album as a bonus song although there IS one after the end of last track, in which he mentiones “Blueprint 2” will be coming out next November. After hearing his live performance and a little taste of what’s to come, the fans should undoubtedly stay hungry. For the rarely tread waters of rap concert albums, Jay-Z’s “Unplugged” is as good as they get.