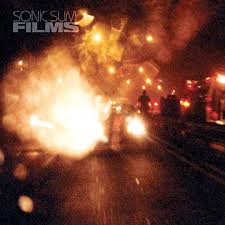 As the saying goes, you either love or hate Def Jux. To some it’s the perfect mix of next generation beats and complex lyricism while to others it’s just that nerdy abstract crap you don’t mess with. I stand somewhere in the middle of the map as I don’t check out too many Def Jux albums, but I find C-Rayz Walz and El P dope and will pick up an occasional album. Sonic Sum’s “Films” is the latest release by the label and carries on the tradition of the aforementioned acts. The group consists of front-man Rob Sonic and DJs/Producers Eric M.O. and Fred Ones. There is a fourth member of the group but the press kit and liner notes fail to mention him/her by name. Despite being a group, it is Rob Sonic that dominates the album both as a producer and as the lone emcee.

The album kicks off with “Oscillator” which likely takes the name from the movement of the synthesizers on the beat. The electronic grooves are more akin to white noise than conventional hip-hop, but Sonic Sum takes pride in pushing the limits of rap music. Rob Sonic spits some lyrics which help explain why Def Jux is such a dividing force:

“Interrupter interceptor on the fritz
Rites of passage
Military men draw plasma
Hypnotic so we lost it
Sober by redefining laymen’s terms
By blackout and no generator
All topsy, turvy cadence raising rent on utility closets
Collecting degenerates, defaming idea men’s deposits
Having a go at razor wire double dutch Frisbee toss with saw blades
We’re all staying for the health watch but came for the cotton candy
On the sand riding novelties we’ve informally gotten handy
At handling loss and straddling fences
With the accuracy of blind pilots
Trying desperately to thread the needles eyelid
In the dark room I can sense the climate here may be better suited for vegetation
If it weren’t for the radiation”

Do I understand what the man is trying to say here? No, nor do I care to sit here and try to decipher his message. Yet, there are people out there who love this sort of lyricism. They enjoy the challenge of trying to break the abstract code and they appreciate the fact that the lyrics are open for interpretation. Depending on where you stand, Rob Sonic is a wack emcee or the next generation of great American poetry. All I can say about Rob Sonic is that he has a tight flow and the lines that aren’t overly abstract tend to be dope on many levels.

Musically, Rob Sonic and Sonic Sum shine and are far more palatable. The beats range from simple loop based production (see “Choking Victim”) to out of this world, dirty synthesizer mixes (check out “Circuit Breaker”). From a production standpoint, I can appreciate what Sonic, Ones, and M.O. manage to do with samples and synthesizers. The issue is that as experimental and different as the production is, it isn’t so amazing that it makes the album enjoyable as a whole.

Overall I can’t say much either way about Sonic Sum. Rob Sonic is a talented producer and emcee, but his message and lyrics are as far from universal as you can get. Personally, I won’t be checking them out in the future but I tend to stray away from abstract lyricism. For those who love Def Jux, this will probably be considered another dope release from the label. This conflicts leads to a problem when it comes to analyzing something like “Films.” Do I knock it because I don’t like it, even when I am clearly not their targeted audience? That wouldn’t seem fair, but at the same time shouldn’t music be judged with the average man in mind? In the end, all I can do is group Sonic Sum with the countless other albums I’ve peeped that I didn’t hate but didn’t love and leave it up to you to decide whether Sonic Sum is for you.