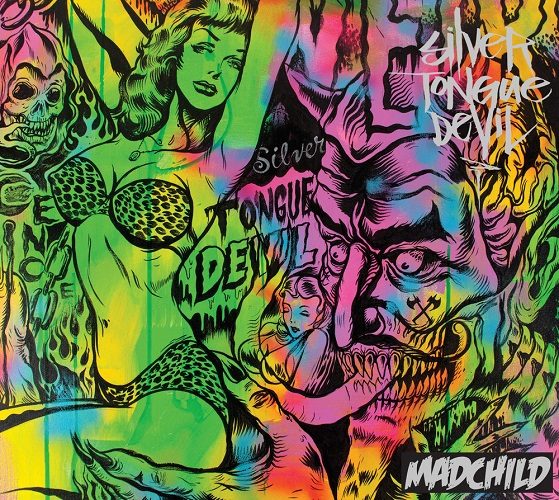 Madchild sums up his career in the opening track of “Silver Tongue Devil” as “five classic albums, two bad mistakes.” I’m having a little trouble doing the math on that one, because this is his third solo album, and he also has at least a half dozen EP releases. It’s likely that he’s referring to the Swollen Members catalog, the Canadian rap group that brought him to global prominence, but their total list of albums exceeds those totals as well. In the end the only conclusion you can draw is that he’s cherry picking from the extensive list of group AND solo releases he’s done and feels that in his humble opinion he’s done some good work, but he’s humble enough to admit he made some mistakes “when I was doing drugs and had lousy taste.” It’s that blunt honesty that’s always made Madchild appealing.

“It’s comical, I’m so astronomical
This rocket should have blasted off a long time ago
I’m just trying to get as big as Tech N9ne and Hopsin
So every night I pray to God let that be my option” – “Night Time Kill”

If you’ve never experienced Madchild or Swollen Members before and this is your introduction, the first two things you need to know are that he’s incredibly braggadocious and very passionate about hip-hop. He’s the kind of person who works in punchlines like “my Soul is Mischievous like A-Plus and Opio” just because. It’s not even that he’s necessarily trying to prove how clever he is, it’s just the way he’s wired, to live and breathe hip-hop and blaze a trail for others to follow behind him. He’s a rap teacher and his followers are “studying my methods like a vocal coach.” That leads to the second thing you should know about Madchild – he’s literally impossible to imitate. If you could splice B-Real, Eminem and Evidence together you might START to get someone who sounds like Mad – but his vocal pitch and delivery are entirely his own in a very “love it or hate it” way. And speaking of Evidence, he produced “Devils and Angels.”

The third thing you should know about Madchild is that he has turbulent emotions that he has to use hip-hop to express, often channeling his inner frustration in incredibly graphic ways that would probably upset the pastor and make the choir faint if you played him in church. “Every girl’s a model, every girl’s a model/p#%@y coming at me like I won the f%@%ing lotto” raps Madchild on “SLUT,” a song where he spends just over 4 minutes and 20 seconds venting about how pornographic the world is in while simultaneously reveling in the orgy of it. Yes he’s a complicated man, and he has his demons, but at least that makes for a compelling musical experience. Who wants to hear about a perfect person living a perfect life with their perfect partner/husband/wife anyway? “Self-destructive patterns and addictive personality/You think that we can co-exist? But that just ain’t reality,” quips Mad on “Everytime” with CeeKay Jones. Even his self-growth is graphic. “Smoking barrel in my hand, giving life another try/for me to win I had to kill the monster on the other side.” Is it any wonder the C-Lance produced “Lose My Mind” was a single?

Most of this hour long release is flying solo, but here and there you can find a few partners in crime who are of a like mind. Slaine shows up “swinging my d#%! like Jim Duggan with his Hacksaw” on “Triple Threat” and returns on “Don’t Stop.” Demrick also pulls double duty on “Mental” and “Slayer.” The guest apperances don’t detract from the experience, but it’s the voice and personality of Madchild that drive the album. It’s the fuel that fires songs like the piano laced “Painful Skies” where in a very “My Name Is Earl” manner he vows “My life is good, each day is better than the next day/but I have not forgotten, won’t settle ’til every debt’s paid.” You’d almost think it was bi-polar when he calls himself “the Canadian werewolf” on the follow-up “Jackel” and raps about being “a sick and twisted picture with invisible friends,” but it’s the yin and yang that bring “Silver Tongue Devil” together. He’s proudly abnormal – an admitted recovering drug addict, a tattooed weirdo, and a narcissist “who can’t pass a mirror without a handsome glance” – and it’s the flawed humanity of Shane Bunting that makes this album a success.