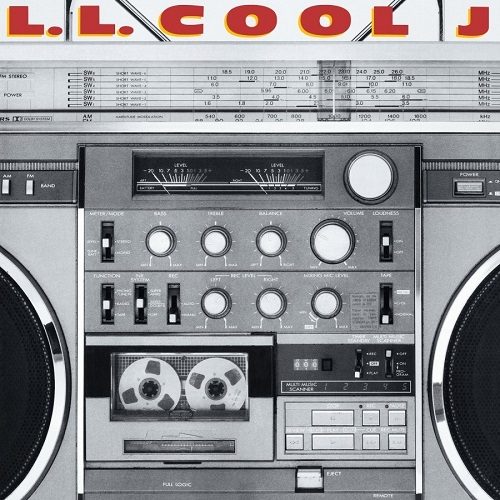 Most of the times I go ‘Back to the Lab’ I’m adding reviews of classic albums I discovered either early in the 90’s in high school or later on when I was in college; but this album was released before I even knew who L.L. Cool J was. At the time I was already a fan of rap artists from Grandmaster Flash to Kool Moe Dee, but none of the songs from LL’s “Radio” ever got any play on my frequency modulation receiver of the same name. If you’re asking why I couldn’t identify the erstwhile rapper from “Krush Groove” around this time, any movies to do with rap were banned from theatres where I grew up. Even the Fat Boys comedy “Disorderlies” never had a chance in hell. Not until James Todd Smith lit up the music world with the sheer hardcore bravado of “I’m Bad” could I even have told you who he was, and that album came out fully two years later.

So what can I say about “Radio” that does fair justice to the revolutionary change in rap’s sound it heralded? Like Audio Two’s “Top Billin'” single or the hard-driving raps of original gangster Schoolly D, the tracks eshewed glam and melody in favor of stripped down sound – the beats, and the rhymes. In fact, the cover itself claims that Rick Rubin “reduced” rather than “produced” this album – meaning nothing was left but the bare essentials. And this album is essential; because as much or more than any similar project released in the mid 80’s it showcases the raw potential of a new rap sound pushing melody driven hip-hop artists like Sugarhill Gang into a new category: “old school.” In fact, their record label is now infamous for having dismissed Cool J’s demo tape and their one chance to catch the train before the new era left them in the dust.

The first cut “I Can’t Live Without My Radio” summarizes the difference between the rap generations perfectly. If you’re not familiar with the mid-80’s style of so-called “ghetto blasters” then rent a copy of Spike Lee’s “Do the Right Thing” and check out Radio Raheem’s boombox — THIS is the kind of “radio” L.L. Cool J is talking about, the same kind that graces his album’s cover. Loud and proud like James Brown, James Todd Smith is out to let the world know that hip-hop’s music, lyrics, and attitude are completely uncompromising in any way:

“My radio, believe me, I like it loud
I’m the man with the box that can rock the crowd
Walkin down the street, to the hardcore beat
While my JVC vibrates the concrete
I’m sorry, if you can’t understand
But I need a radio inside my hand
Don’t mean to offend other citizens
But I kick my volume WAY past ten
My story is rough, my neighbourhood is tough
But I still sport gold, and I’m out to crush
My name is Cool J, I devastate the show
But I couldn’t survive without my radio
Terrorising my neighbours, with the heavy bass
I keep the suckers in FEAR by the look on my face
My radio’s bad from the Boulevard
I’m a hip-hop gangster and my name is Todd”

All of the elements that defined L.L. Cool J’s first four albums as necessary in any serious hip-hoppers boombox (even the unfairly lambasted “Walking With a Panther”) can be found on this debut LP. L.L. uses humor to dismiss a b-boy with two left feet on “You Can’t Dance” by not only calling him a dinosaur saying he looks like “Ralph Kramden or a Donald Duck cartoon.” The duality of L.L.’s attitude towards women is reflected by his ode towards a slutty around-the-way-girl on “Dear Yvette” and then replaced by his slyly pitched woo on “I Can Give You More.” L.L. is most at home on this album though when he can brag and talk shit, even when it’s about his DJ Cut Creator on the song “Dangerous”:

“He circumcises DJ’s when he’s on the airwaves
‘Til the missions’ complete, you’re a musical slave
In his division he’ll endure any collision
Like a surgeon with a scalpal, he’ll make an incision
As for me I’ll annihilate, exhile ex-communicate
you from rappin and my lyrics are the best
You slowed down the rap, but not the subject matter
All you sucker DJ’s will scatter”

Some people may be confused by the song “Rock the Bells” when they hear heavy bass beats and trademark Cut Creator scratching over funky drum breaks – where are the bells? This song is an irony of hip-hop history because it was produced right around the same time that Run-D.M.C. were working on a similar song called “Peter Piper.” Historians among the readers will recall that Def Jam CEO Russell Simmons and Joseph ‘Run’ Simmons were brothers, and apparently Run-D.M.C. didn’t take the similarity between the two songs kindly. To keep the peace, Def Jam convinced L.L. to record a new version of the song, the one whose extra chunky beats gave the phrase “Rock the Bells” a whole new meaning — instead of being literally about ‘bells’ it instead became a description of a hip-hop attack akin to the ‘bell’ rung at the beginning of a boxing match. If you want to hear the original bad enough though, find the obscure album “Def Jam Classics Vol. 1” and make sure it has a 1980’s copyright date.

The rest of this album continues the formula that “Rock the Bells” made legendary, and which Rick Rubin “reduced” to the basics – the beats, and the rhymes. From Jazzy J’s remix of the pounding “I Need a Beat” (unfortunately, the original is not included) to the hard stomping sounds of “That’s a Lie” or “You’ll Rock” there’s nothing to get in the way of the b-boy bravado he encapsulates, even though the velvety smooth vocals of the Ladies Lover Cool James do make a return on the album’s closer “I Want You” – a somewhat more sexual prelude to 1987’s crossover hit “I Need Love.” An interesting sidenote about this album is that L.L. Cool J’s management is listed in the thin liner notes (no staples or binding) as “Sean ‘Puffy’ Combs for Bad Boy Management.” It seems this album was the launching pad for a lot of different success stories: Rick Rubin as a musical pioneer, L.L. Cool J as a household name, and Russell Simmons and Sean Combs as moguls in the music industry. For some modern era rap fans who think that KRS-One’s “Return of the Boom Bap” is old school and grew up after N.W.A had already broke up, this album may be hard to appreciate — but both L.L. Cool J fans and rap historians will recognize the stark simplicity and brutal beauty of this debut as a testament to the bigger and better things to come from hip-hop AND from L.L. in the years ahead.