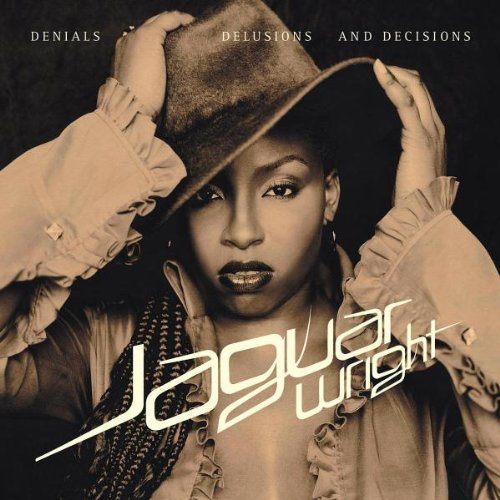 In the normal course of events, R&B albums are to me what anthrax is to postal workers – a foreign and deadly substance to be avoided at almost all costs. I barely tolerate the numerous R&B artists who I feel have been pimping hip-hop culture to help their albums crossover and sneer with disgust when I hear Jennifer Lopez re-interpreting Craig Mack’s “Flava In Ya Ear” for a remix of “Ain’t it Funny” w/ Ja Rule. There are a few rare and noteworthy exceptions though – I like the class of singers like Monica and the brass of vocalists like Mary J. Blige, although usually I wait to find their albums used.

One artist had to come along and be an exception to all my rules, and Jaguar Wright is that one. To start with, she’s a member of that urban soul hip-hop family known simply as Okayplayer, a crew whose members include The Roots, Common, Dilated Peoples and D’Angelo. Not surprisingly, the producers and musicians who have sculpted their sound heavily influence this album too: Scott Storch, Leonard ‘Hub’ Hubbard, and Ahmir ‘?uestlove’ Thompson among others. Not only does Jaguar have a hip-hop family and hip-hop production, she has a hip-hop attitude – and the parental advistory sticker to go along with it. Throw in the mix that her album went on sale last Tuesday for $6.99 at most retail outlets nationwide AND the fact her reputation is blowing up with a Coca-Cola commercial and a live performance with Jay-Z and I just could NOT pass up checking her out.

Jaguar Wright embodies a certain coolness in her presentation that a lot of her contemporaries are missing save for Macy Gray. No, she doesn’t have Macy’s husky voice, but her vocals are certainly deep and sultry and equally reminiscent of a smoky nightclub where good live music is heard. If ever a singer was rapping to her audience, Jaguar certainly is on sassy songs like “Same Shit Different Day” and “The What If’s.” On the latter mama be blowing some SERIOUS blues with her lyrics:

“See everytime I try to leave
You think of new reasons on why I should stay
And everytime I tell you no
I can’t believe you still get mad
cause I won’t give you your way
And it don’t hurt no more, uh-uhh
when I see you with that other BITCH
And lately you cry, and I don’t know why
And I can’t understand this shit!”

For fans of The Roots who have suffered through the cancellation of Black Thought’s solo album and the long-awaited release of their new album “Phrenology”, this album offers a special treat — Thought raps on the songs “I Don’t Know” and “Ain’t Nobody Playin’.” If R&B singers are going to duet with rap stars, this is how it SHOULD be done; because nothing found here is cornball or unoriginal. Just peep his vocals on the latter cut for a taste of what 2002 has in stores for his group:

“All I know is Jag really wasn’t playin at all
She left calmly to speak to the John
Got the Jaguar double-parked, blinkers is on
Hair pulled back, sneakers is on
Yo I don’t know what sis told her
but she bout to get a beating performed
She grabbed him, all up on his shirt, tuggin on her slacks
Jag tried to go for the grill, I had to hold her back
Cool her out, told her to chill, lower the thermostat
You a star, no need for you to stoop as low as that
Warning, scrappin over men is best avoided
And a real lady would never confess to doin it
She said I’m gangsta, don’t let the dress confuse shit
The only thing sweet is the music”

What could sum up Jaguar Wright better than that? Turning the dial all the way from 88.5 to 107.9, Jaguar hits the right frequency modulation on every topic. From the Jamaican liberation of “Self Love” to the steamy up-tempo heat of “I Can’t Wait” with Bilal to the self-doubts of “Stay,” every feeling is excellently captured by her singing and the appropriate grooves matched to the track. There are breakout hits on this album just waiting to happen, but my personal choice would be the cool-out groove of “Country Song.” Whatever blows up on this album, Jaguar Wright has already succeeded by making an album that’s not the same rhythm and bullshit you hear routinely passed off as R&B.