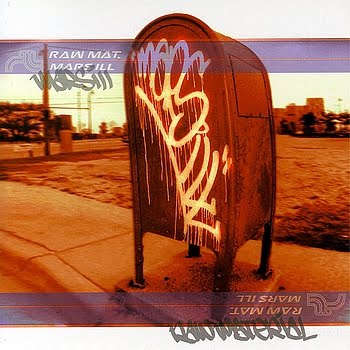 Damn – there’s so much that I want to say about this album, but I don’t think it would be possible to cram all of my comments into this one review. And to a certain extent, I think that’s the way Mars Ill must have felt when they were recording “Raw Material.” This is a record that is bursting with so much creativity, so many experimental ideas, that it’s really only possible to catch a small fragment of it on your first listen. Make no mistake â€“ this is the type of music that begs for you to strap on the biggest, most fat-ass pair of headphones you can find, lay back and just chill. There’s plenty to absorb here.

Hailing from the ATL, Mars Ill is composed of one DJ and one MC. The former’s handle is Dust while the latter goes by the name Soul Heir the Manchild. So as we can all see, naming things is not where the group’s strength lies. I honestly believe “Mars Ill” is the worst name I have ever heard for a hip hop crew. What were they thinking with that one, I wonder? And “the Manchild?” Strange indeed. But Mama always said not to judge a book by its cover, so we mustn’t let these small things bother us.

With that said though, realize that “Raw Material” is far from a two-man operation. Guest appearances abound here. On the production side, there are contributions from Scott Matelic, Freddie Bruno, and Harry Krum, but most of it is done in-house. Sharing the mic with “the Manchild” on the album’s 19 tracks is a huge roster of MCs, including the likes of Playdough (of ill harmonics), Flynn and Sharlok Poems, Sintaxtheterrific, Neogen, Deacon, Rahlo, and the list goes on.. Clearly, this shit is DEEP underground.

As I listened to “Raw Material”, I tried to think of who’s sound it was that the album reminded me of. But try as I did, the answer just wouldn’t come to me. Then it hit me: Mars Ill is channeling SO many different MCs and groups that it’s impossible to really compare them to anyone in particular. Listening to the record made me think of everyone from Styles of Beyond, the Roots, and Jurassic 5 to Common Sense, Dilated Peoples and, believe it or not, even Massive Attack! Eclectic doesn’t begin to describe these cats. But what’s great is that they never come off sounding like biters. This is all very original work. And best of all, every track is totally different. Each one has its own sound, and that in itself is a positive and refreshing change from most other albums.

First off, MAD respect to Mars Ill for their choice in samples. I don’t know where these boys find them, but the samples here, while used sparingly, are top-notch. For example, the hook on “Sphere of Hip-Hop pt. 2”, boasts a VERY nicely used KRS-ONE sample: “Gimme a chance man, I know I can rock it!” And the intro to track three, “We’ll live Underground” is easily one of my favorite intros ever. It features some guy talking about how he and a group of “only the strongest men” will live under the streets of New York. Trust me, it may not sound like much in writing, but it comes out sounding impressive as all get-out.

Moving on to the lyrical side of things — as ridiculous as his name is, Soul Heir the Manchild is an intelligent, interesting MC to listen to. You can’t hope to catch all of what he and his guests have to say, but that just makes for more enjoyable repeated listenings since you’ll find something new each time. And trust me, you will listen to “Raw Material” repeatedly if you like being challenged by lyrical content. It is absolutely overflowing with wit, carefully-crafted rhymes, and meticulous song structuring. For something called “Raw Material”, the whole thing sure sounds polished to me. Now, I’m not even going to attempt to pick just one of the Manchild’s paragraphs as his best effort â€“ that would be too difficult. But I kinda like this excerpt from “Unsound”:

“Known from here to Italy
Such a deep impact on hip hop you’d think maybe a comet was hittin me
Spitting ill soliloquies in a symphony of similes
Connected with this sphere ’cause I can’t stand this industry..
I’m tired of floods of words without a single drop of reason
Tired of cats who change styles like the seasons
They still rhyme in monotone directly on the metronome
Now – if I battle you in the forest and you fall is there a sound?”

So good. So very good. But my favorite line on the album isn’t even spit by the Manchild. One of his guests, specifically the cat featured on the beautiful track, “Love’s Not” (can’t identify who this guest is, since he’s not credited on my copy of the album) when he says that “True love is like a ghost â€“ talked about, but rarely seen.” Nice.

To sum things up, “Raw Material” by Mars Ill is an album that absolutely every fan of the underground scene owes it to themselves to listen to. I’m going to give the album a final score of 7.5 out of 10, but only because I truly feel that with just a little more polishing, Mars Ill could have made this great album a phenomenal one. They have clearly put in tons of effort, and they have PLENTY of skill to go around, but it almost sounds like they’re holding themselves back some of the time. They need to let it all out for a full album like they do on the album’s closing track, “The Abolition of Manchild.” This track is INCREDIBLE, and I think that if the whole album was on this same level, we’d have an instant classic on our hands with “Raw Material”. One other thing to note is the fact that the album runs for an insanely long 72 minutes. That is excessive. 20 minutes could have been trimmed off easily, and had it been, the whole product would have been stronger.

Bottom line, Mars Ill is a fantastic, but seemingly underachieving, crew. With a little more work on their raw material, I wouldn’t be surprised to see them eventually blow up the way Dilated did. Judging by their talents and abilities, they more than deserve to. But whatever happens, I hope to hear more from them very soon.