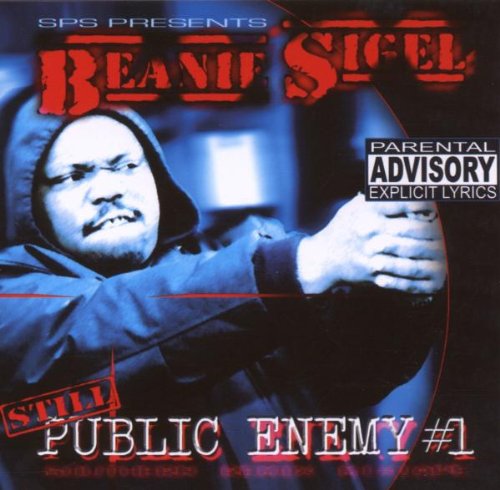 Beanie Sigel is a man with a lot to say who often finds that his self-injurious behavior prevents the message from reaching the public. His legal problems are already the stuff of legend, and although they may enhance his street credibility as “The Truth” they also keep him bouncing in and out of courtrooms and keep him from “B. Coming” the huge rap star he could be. It’s pretty hard to promote your album or tour when you’re more worried about whether or not you’ll be doing a long bid upstate. To add insult to injury, it appears Beans may not even be with long-time partner Pimpin’ Incorporated” DVD/mixtape combo into retail outlets.

Unfortunately the news doesn’t necessarily improve for Beans as one delves further into what “Still Public Enemy #1” is. Despite not being billed as such anywhere on the album cover or tray insert, this is actually a “Beanie & Friends” style compilation. Only a few of the songs feature Beanie by himself, the rest are a collection of previously unknown rappers who Beans seeems to be pushing as the NEW State Property collective. Why new? Because it appears anybody who was formerly affiliated with Beans before his latest round of legal problems split with him and stayed with the Roc, and as previously noted this is not a Roc-A-Fella release. Therefore you won’t be hearing Young Gunz, Oschino & Sparks, Peedi Crakk or any of the other names you previously associated with State Prop here. Instead the listener is treated to the likes of Mook Jones, who appears on the quizzical “All Eyes on State P.” In the song’s chorus Sigel repeatedly states that until Jigga or “my nigga Jigga” returns it’s “all eyes on Sig'” but the relationship between him and Jay now seems to be tenuous at best. Mook tries his best to impress with his rap:

“I told my daddy I could not fail
My money knot like a oxtail
Shoulda signed to MSN, I’m a hot-male/hotmail
I can give two fucks if he can box well
Hot shells make sure he fit inside a box well
Got a full clip for all of you niggaz
Guns like hot water, I boil you niggaz”

Mook does not achieve his ambitions on this album and it’s unlikely he will any time soon with corny raps like these. As this album’s most frequent guest, appearing on six out of eleven actual songs (two tracks are introductions and the closing is a “BigFace Gary” skit), that’s a problem. When Beanie does get the rare opportunity to setp into the spotlight solo, he shows why in fact it should be his alone and not shared by a bunch of unknown and unproven newcomers, such as on “Same Ole Thang”:

“Braids gone, my wave’s on, got ’em seasick, I’m up in
Your ribs touchin like you ain’t eat shit
Whoever said that the kid wouldn’t be shit? Stacks increasin
That’s a moot point so keep leapin
Spaces to the left, feds keep creepin
Plottin on my arrest, they want a nigga stretched in the precinct
Press’ll paint a picture like, don’t release him
Check his background, his prior stretch since a delinquent
Plus check the people he in sync with”

The good news is that it’s not all bad on “Still Public Enemy #1.” Despite not being a real Beanie Sigel album in many ways and not having the best rap talent available in many others, there are times when this album still works. Da Network appears to be not just Beanie’s new imprint but his new partner on music production and shows himself to be an able craftsman in this area. “Let Go” builds up in intensity the longer it plays and would be at home in the soundtrack of a blaxploitation flick. “Da Rain” makes excellent use of some horny horns and finger snaps, building an enjoyable melody out of the simplest of formulas. “Beans is Back” sounds as good as any Sigel track you would find on a Roc release, with Sigel bragging that he’s got “niggaz on the back block rootin for the bad guy,” and “All Nite” is slick enough that Mook Jones and Yung World come off as being far more relevant on the cut. Quite frankly, Da Network singlehandedly saves this album from obscurity. “Still Public Enemy #1” is an overly ambitious title for this release, but Sigel fans will find hope here that his career can still be relaunched if he avoids further incarceration.